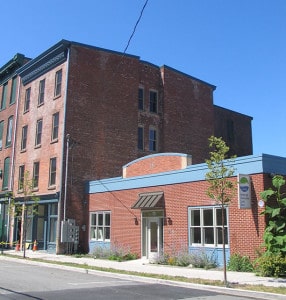 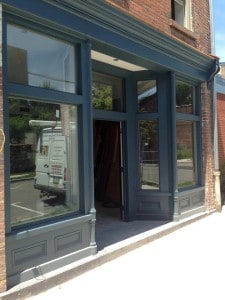 Newburgh’s Land Bank Revitalization Success Story begins with Architect Jeff Wilkinson. Jeff is a scholarly, enthusiastic and one might even say, activist participant in the renovation and restoration renaissance occurring in Hudson River small cities and towns.

He  has both owned and renovated properties in Beacon, N.Y.  and Newburgh, N.Y., as well as worked on renovations in other historic towns along the Hudson, such as bucolic Garrison, N.Y., home of  the Federalist-style estate, Boscobel.

Wilkinson’s experience includes working as an apprentice for Robert A.M. Stern Architects, as well as doing editorial work for Old-House Journal “where he edited restoration articles and managed several departments including “Restoration Products, and “Who They Were”, a biographical feature of notable America designers, a feature he created and launched,” according to his website, jwra.com

In addition to being an early stakeholder in the Beacon renaissance, Wilkinson also owned and renovated an historic home on Grand Street in the City of Newburgh.

He was also a member of the city planning board, and eventually an owner of a renovated  horse farm in the Town of Newburgh, the completion of which earned him the nickname of “farmatect,” he fondly recalled in a recent interview.

In 2014, Jeff Wilkinson, responded to a Newburgh Community Land Bank RFP for design services to rebuild 13 Chambers Street and 15 Chambers Street, which would eventually house the Land Bank’s offices.

Once selected as the Land Bank’s project architect, Jeff began spending more time in the City of Newburgh. He saw the changes taking place  in Newburgh, and he developed a renewed passion for the city.  As Jeff worked with the Land Bank he learned about their mission and processes.  An early developer in Beacon’s revival, Jeff  had “caught the bug” once again deciding to take on a new, smaller project in Newburgh.  As the  Land Bank’s office project neared completion, Jeff made a proposal to the Land Bank to purchase the 13 Chambers Street building.  His proposal included his plan to put his office on the ground floor and develop low and middle-income apartments above. His plan fit neatly into the evolving emphasis of the city’s Planning and Development Department on Live/Work zones along with the Land Bank’s mission.

The Land Bank agreed: Jeff would make a responsible and productive neighbor, and  his proposal dovetailed neatly with the goals of the Land bank, namely productive use. Here is how they describe productive use on their website:

Productive use means the creation of 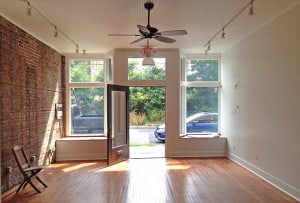 Jeff noted that without incorporating local, county, state or federal incentives, it can be financially challenging to rehabilitate distressed historic properties in Newburgh.

Often, the cost of the project exceeds the value of the building at current retail rates. So he reached out to programs  and utilized them to make the project financially viable, these  included: New York State Office of the Attorney General Community Revitalization Initiative funds, from their website:

In July 2013, New York State Attorney General Schneiderman launched his Land Banks Community Revitalization Initiative, which is dedicating a portion of the funds awarded to New York under the National Mortgage Settlement to support legally designated Land Banks, formed under the New York State Land Bank Act of 2011. In the first round of grant awards, which was announced on October 29, 2013, the Attorney General awarded $13 million to eight land banks statewide, including:

(Here is a list of other City of Newburghy, NY exemptions)

Qualifying for these and other programs requires exacting documentation and execution.  For example, to qualify for the NYS Historic Properties Tax Credits, Jeff chose to maintain the buildings historic fabric/detail.  This required recreating missing moldings, doors and details to match that which was found throughout the building. 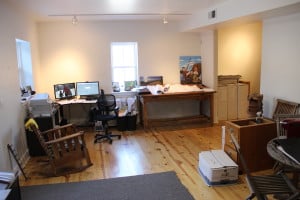 Following an 18 month development process, Jeff says “I love my new office and feel great about being part of revitalizing Newburgh.  Many neighborhood residents have endured years of living in urban blight and welcome even the smallest improvements, especially when opportunities like new, high quality, but affordable apartments become available.”

Jeff’s project and partnership with the Land Bank is part of the solution for making this neighborhood vibrant once again.  And he has made some new friends who, like him, are broadening their experiences and empathy for a city in transition.