A New Source for Architectural Salvage and Restoration in Newburgh.

Young first visited Newburgh over 15 years ago while restoring a Vaux house on Montgomery Street, in Newburgh’s east end historic district. He immediately fell in love with the city and knew he wanted to move there one day.

In 2014 Young and his partner Eric finally moved to Newburgh with the goal of starting a salvage business.

What is Architectural Salvage?

“Because of what I do, which is sort of high-end restoration projects up and down the Hudson River for the last twenty years, specifically in Brooklyn, I buy a lot of salvage. I’m forced to go all over New England, Pennsylvania, Virginia to get the right stuff, and that’s what made me realize…we needed one here,” said Young

“Architectural salvage is everything that’s used in a house that has been salvaged from another house,” explained Young. “We aim to have lots of mantels and doors and window components, millwork components, more than we have right now.”

It even has furniture!

Customers can find anything from a 16-foot-long 20-drawer industrial machinist to doorknob hardware and terracotta garden pots.

Because of Young’s history of work and renovation in New York, a lot of the items that come into his shop are from Brooklyn brownstones.

Young has already been receiving consignment items from Newburgh houses, preserving some of the old building materials and hardware.

A New Source for Architectural Salvage and Restoration on Broadway 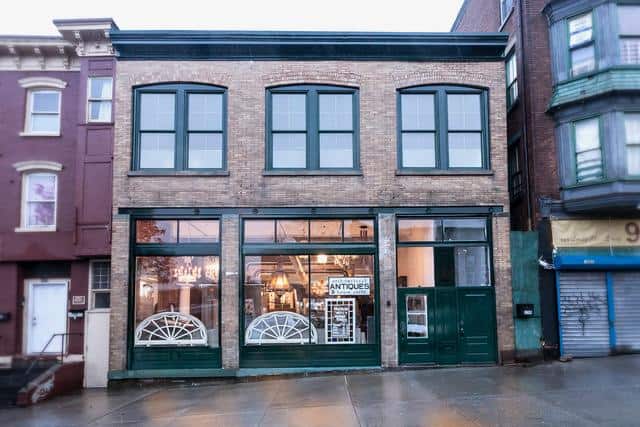 Hudson Valley House Parts is one of many new businesses popping up in the city of Newburgh.

Liberty Street has seen numerous shops and restaurants open up this year alone, including the Flour Shop and Field Trip.

But Young wanted to be on Broadway.

“I really feel as Broadway comes back and has a diversity of stores, then that sort of helps the whole city come back. Because Broadway sort of has a lot of empty storefronts,” said Young.

The 159 Broadway building sat vacant for nearly 15 years before Hudson Valley House Parts moved in this fall. With large storefront windows and a full lower level as well, it was the perfect location.

Young sees a need for architectural salvage in Newburgh. Throughout the country, historic buildings are often demolished if buyers do not step forward.

He referenced the recent debate over the fate of Andrew Jackson Davis’ Dutch Reformed Church, on Grand Street in Newburgh, which is in a state of disrepair.

“The Dutch Reformed Church, certainly one of the most important Greek Revival buildings in America, is crumbling and we haven’t been able to figure out how to yet save it, or who the steward should even be,” said Young.

“So we are faced with some incredible challenges. We have some of the most important fabric, architectural fabric, here that is at peril. And everybody cares about it.”

The City of Newburgh doesn’t have the budget to finance such a huge restoration project. But Young believes the residents can come up with creative ideas for saving the church. Young admitted it’s complicated He admitted that it’s complicated and will require collaboration.

“How we handle those challenges is going to be interesting, and it’s going to be exciting for everybody who is part of that, coming up with those solutions,” said Young.

A Passion for Restoration

Young’s passion for restoration and salvage began at an early age. He grew up in Pennsylvania, which is known for being a big source of architectural salvage. As Young explained, “There’s a lot of good salvage in Pennsylvania because they are basically tearing everything down because it’s being overly developed.”

His parents did some house restoration of their own, often taking Young to look at border samples and designs. They fueled Young’s passion for old architecture by taking him to visit Thomas Jefferson’s home in Monticello, Virginia.

“My first trip to Monticello, when I was like 10, sort of changed my perspective on everything. Thomas Jefferson and his inventions and his sort of eye for detail – the design of Monticello— is just inspiring,” remembered Young.

Moving to the Hudson Valley 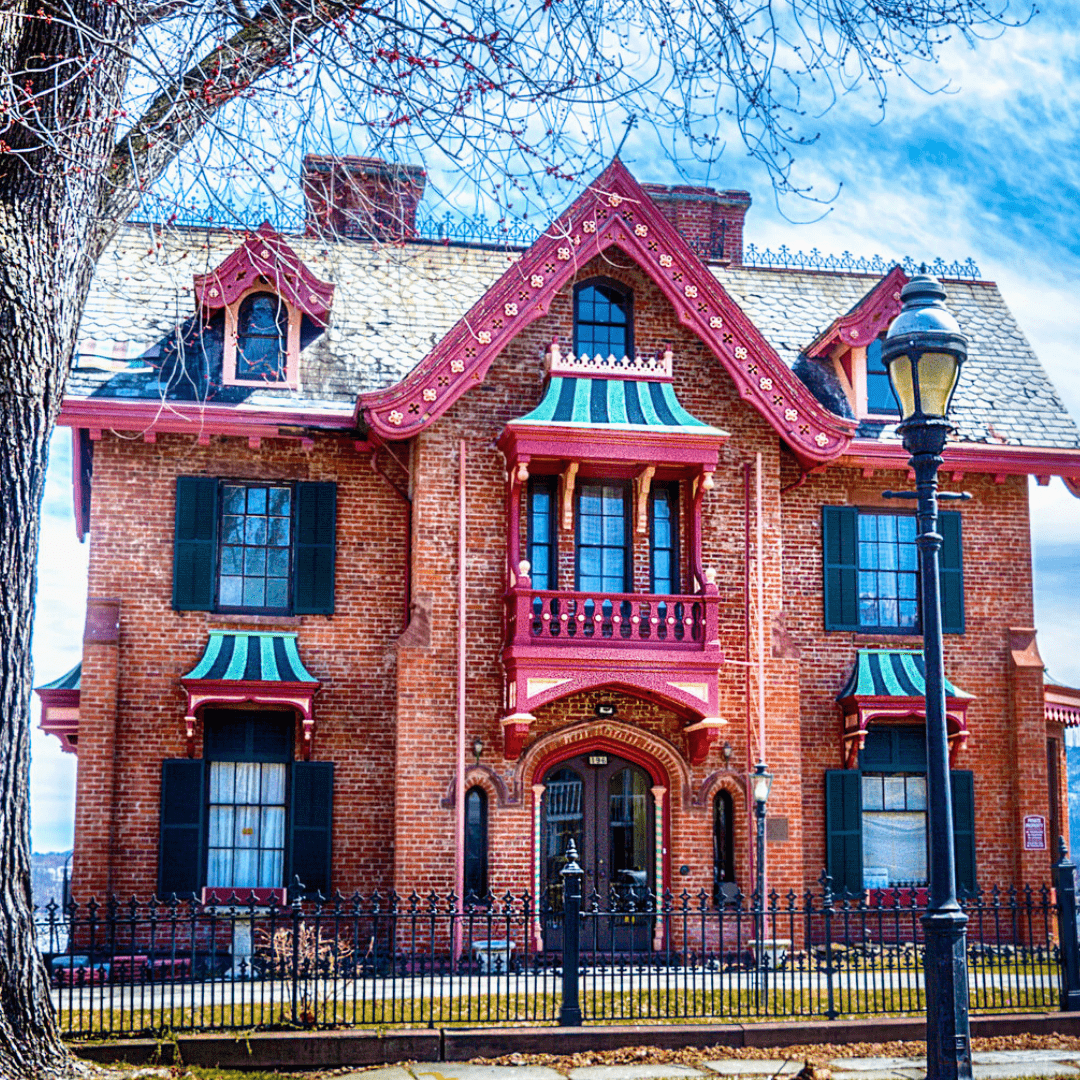 Eventually, Young’s passion for restoration brought him up to the Hudson Valley.

In 2006, Young bought the Howard Hall Farm in Athens, where he held classes teaching restoration and preservation skills. These classes featuring professional restorers who taught preservation techniques for various materials. Young even taught mortar and crown molding classes, his specialty.

“I specialize in historic mortar and mortar matching, and I used to make all my own mortars in Athens,” remembered Young.

The Howard Hall Farm drew students from all over the region, partly because Young recruited the help of skilled teachers. Dennis Heaphy, who maintains the skin of the Statue of Liberty, taught a tin roofing class and Rory Brennan from the TV show This Old House taught plastering. Eventually, Young wanted to bring his classes to an urban area.

From Hudson, N.Y. to Newburgh.

During this time Young lived in Hudson, New York. When he moved there in 2000, the city had gang violence, crime, and boarded up buildings.

But once antique dealers realized they could warehouse their antiques there at a low cost, it became a tourist destination.

Young watched the city transform into the antique mecca it is now, housing nearly 68 antique shops. But he found Hudson, a city of 6,000 people, too small.

“I think the diversity of Newburgh is really exciting in the long term because it has the potential to have jobs in a thriving economy that is spread out a lot more than just … antique stores and restaurants.” 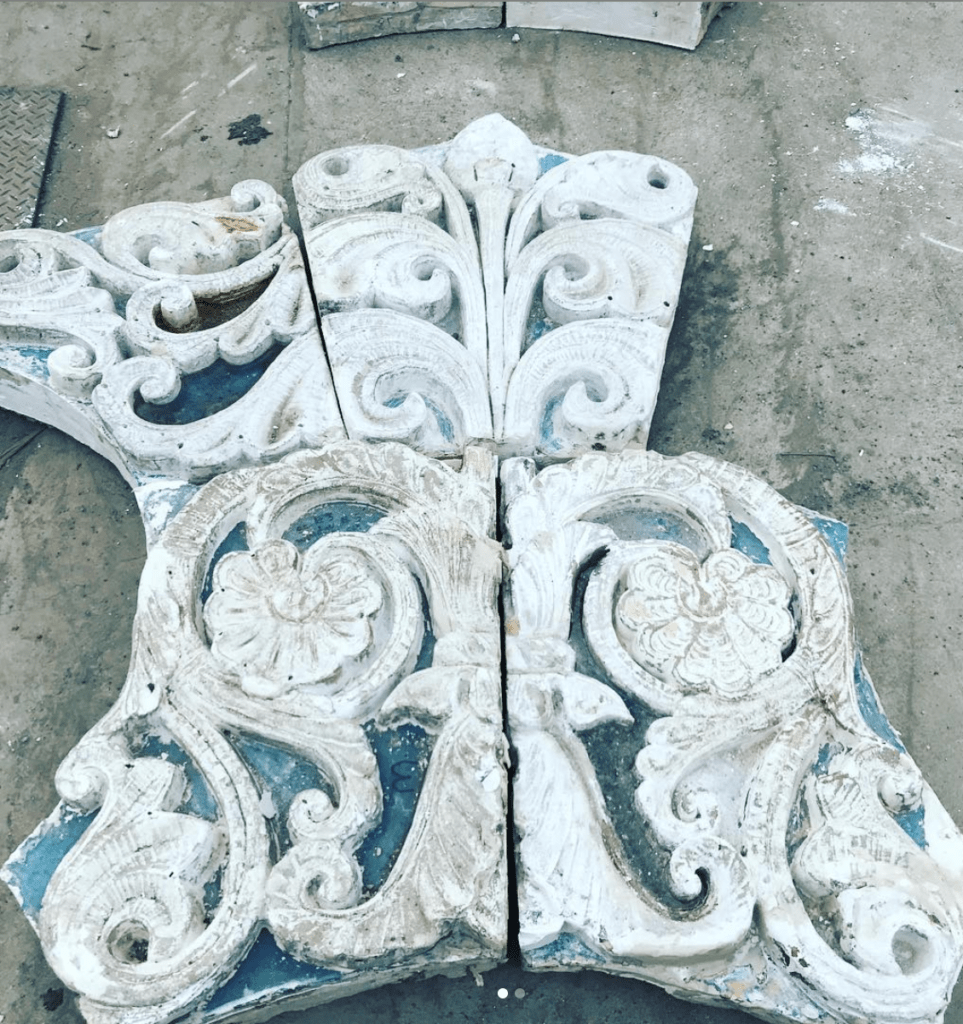 As Young’s business grows, he plans to use the downstairs space to host restoration workshops.

As soon as spring of 2019, Hudson Valley House Parts plans to feature a series of training classes in the building’s expansive lower level.

“We will eventually carry a lot of products that are restoration oriented, not salvage products, but new and material products. So we would actually carry lime mortar, and tools,” explained Young.

Young hopes to collaborate with others in the area who are starting restoration programs.

In the future, the store will offer hard-to-find items such as copper gutters, plaster medallion, and crown moldings, all of which are ideal for restoration projects.

“That’s our goal, to be a sort of resource for restoration,” said Young.

Interested in consigning items at the store? Contact Reggie Young at hudsonvalleyhouseparts@gmail.com, or stop into the 159 Broadway storefront.