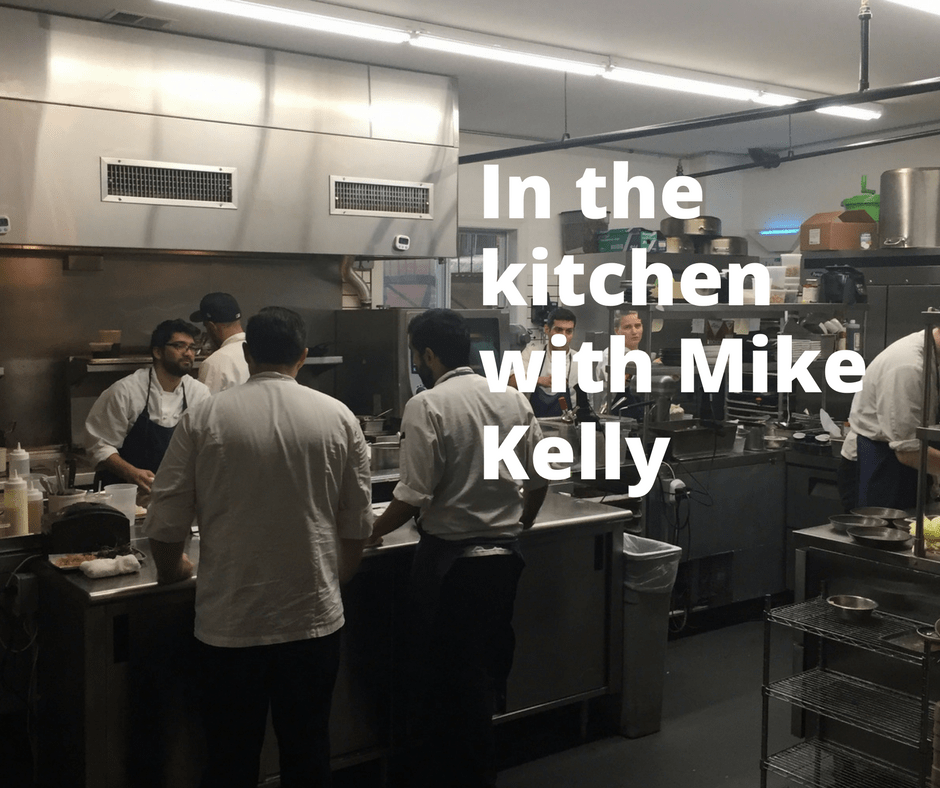 He’s done chef stints at some of the top establishments in the restaurant business (a review of his C.V. reads like a who’s who of culinary stars) both here and abroad.

If you are familiar with Thomas Keller, owner of the French Laundry in Napa, California as well as the equally popular Per Se, in New York, you will be impressed by Kelly’s work history at Keller-owned properties in Manhattan.

Restaurant names like the Freelance Cafe of Piermont and Xaviar’s of Garrison are remembered fondly by foodies regionally and nationally.

(Kelly currently owns Restaurant X in Congers, N.Y. and X2O, Xaviars on the Hudson in Yonkers).

Like Peter Kelly, Mike Kelly (no relation) ultimately decided the Hudson Valley had few rivals for beauty as well as access to an emerging and sophisticated local food and beverage  scene.

The Hudson Valley is also home, as Mike was born and raised here.

Fine dining in the Historic District

In 2016, he decided to make a business move and opened the  Liberty Street Bistro, in Newburgh, N.Y.

The goal? To provide fine dining in an emerging, historic area.

Kelly’s Bistro is on Liberty Street right across from Washington’s Headquarters.

Liberty Street is in the East End Historic District where galleries and other restaurants are catering to a growing audience of creatives and makers discovering and moving to Newburgh.

During a visit to the Liberty Street Bistro (btw, a charming, softly lit restaurant with a quiet and understated ambiance, superb service and delicious and beautifully presented food) we had a chance to have a converse with Kelly, learn about his background, food heroes and inspirations, and his dreams for Newburgh, N.Y.:

Our conversation with Chef Kelly

Q. How did your passion for food and the culinary arts develop?

A. I developed an interest in cooking from my grandfather, John Smitchger, who didn’t cook often but was very ambitious on special occasions. He would always roast a gorgeous ham for Thanksgiving with turnips which I still haven’t figured out how to replicate.

I started working at Nicky’s in Cornwall, (Kelly grew up in Cornwall, a small village suburb of Newburgh, just to its south) which no longer exists, where I bussed tables, washed dishes, and scrambled the occasional egg.

By the time I was about to leave high school, I had worked in most of the local restaurants.

This further interested me in getting into a kitchen fulltime to learn about classic food traditions.

Specifically, I remember being fascinated by fresh pasta!

When I left for college at Oswego State I majored in physics and minored in political science. I’ve always had, and still have, an affinity for science.

Ironically, in between lectures and breaks, I would find myself in dorm kitchens making sauces or messing around with terribly executed roasts.

Q.  And then you made your way to the Culinary Institute?

A. Yes. I can’t put my finger on the moment specifically, but I did eventually convince myself that being in a kitchen for hundred hour weeks for the foreseeable future was something my parents might get behind.

It took some convincing, but, eventually, they were sold on the idea of the Culinary Institute of America.

Q. Were there any special internships?

A. After completing my initial coursework at the CIA, I interned for Peter Kelly of Xaviars and Kurt Guttenbrunner of Wallse.

Those were formative years for me, especially with Peter. While culinary internships don’t tend to lend you much skill in the kitchen, they do offer examples of how to carry yourself.

Peter, to this day, is exemplary of how professionalism in the kitchen should be.

Q. And where did you land after the Culinary?

A. After CIA, I secured a position with Thomas Keller Restaurant Group at Bouchon Bakery at Columbus Circle.

I remained there for a little over a year and left for restaurant  Gordon Ramsay at the London Hotel.

It’s there that I met noted chef Markus Glocker, who was the chef de cuisine. From the first tasting I did with Markus it was apparent that he had taken a liking to me.

After a year of standing behind the hottest French cooktop I have ever felt, Markus promoted me as the youngest Sous Chef to have been promoted at GR.

I stayed on for two and a half years until Markus, David Brinkman (executive sous chef), and myself ultimately decided to leave at the same time.

I went back to Bouchon Bakery as a sous chef (Bouchon is part of the Thomas Keller Restaurant Group).

I wound up executing a lot of the morning caterings for private events at Per Se.

This was sort of an in-between time: my chef friend Markus wasn’t ready to break out on his own yet and was traveling around consulting across the country, and I was planning my wedding.

Q. What was your career-changing moment?

A. About a year went by before I heard from Markus. He called me and asked me to meet him at 239 West Broadway on a frigid January afternoon.

I showed up early and entered a restaurant that smelled of mildew, ceiling tiles in the kitchen pulled down with wires hanging out. The refrigerators were all off, and seemingly, the previous tenant had left in a hurry. There was rotting food everywhere

A. Markus asked me to help him open Batard in the middle of a giant mess, and I immediately said yes.

Alex and I were married on May 18th of 2014. When we landed at JFK  the next week, I essentially went straight to Batard. Alex didn’t see me for a month.

Batard was an incredible experience. We crafted a restaurant from nothing and made of it what we wanted.

Markus, had surrounded himself with incredibly talented people, and opened a restaurant that went on to receive 3 stars from the NYT, James Beard Award for Best New Restaurant of 2015, and most incredibly, the notoriously difficult to acquire Michelin Star.

Markus asked me to be his rotisseur (meat, sauce, and roast) cook for the opening. I took on sous chef responsibility right after we received the NYT review.

One of the most important things to happen for me at Batard was when our Pastry Chef up and quit out of the blue.

I have no formal training in pastry at all, but I volunteered to take over the station. It was supposed to be temporary, maybe a month, I was there for six months before we found anyone qualified. It was the most challenging six months of my career, but the self-inflicted education I received was priceless.

Q. So, when did you decide to return to the Hudson Valley?

A. Somewhere towards the end of our run at GR, I had decided I wanted to return home to the Hudson Valley. At the time I did not have anything more than ideas. Those ideas floated around for 3 years before I acted on them. We moved back at the end of 2015. It took slightly under a year to get our doors open.

A. Opening in Newburgh was a tough sell across the board. Newburgh has been dealing with crime, poverty, economic purgatory, and racial tension for the last 40 years. I don’t think a fine dining restaurant was at the top of the list of things Newburgh needed for many people.

For me, a city with the history and lore of Newburgh deserves a great restaurant. I believe in this place, I believe in the people trying to make a difference, and I want badly to be a part of the revitalization of this once, and future, great city.

Since speaking with Mike, his Liberty Street Bistro has just been nominated Hudson Valley Magazine’s Best of the Hudson Valley 2017  Best New Restaurant and garners rave reviews on Trip Advisor, https://www.yelp.com/biz/liberty-street-bistro-newburgh-2Yelp, and Google.

Mike is also a recent homeowner (with his wife, Alex Rosario Kelly) in Newburgh “we really wanted to live in the community we were investing so much of our lives in,” he explained.

Besides running his restaurant, Mike also finds time to enhance the Newburgh community by running a Facebook group, a film series, and numerous other endeavors such as fundraising for Newburgh Illuminated.