(We are updating this post with an image of one of the architectural renderings presented by Between Spaces to the Newburgh Architectural Review Board the week of 12/10/18. Their plans were approved and this will have a huge impact on the area). 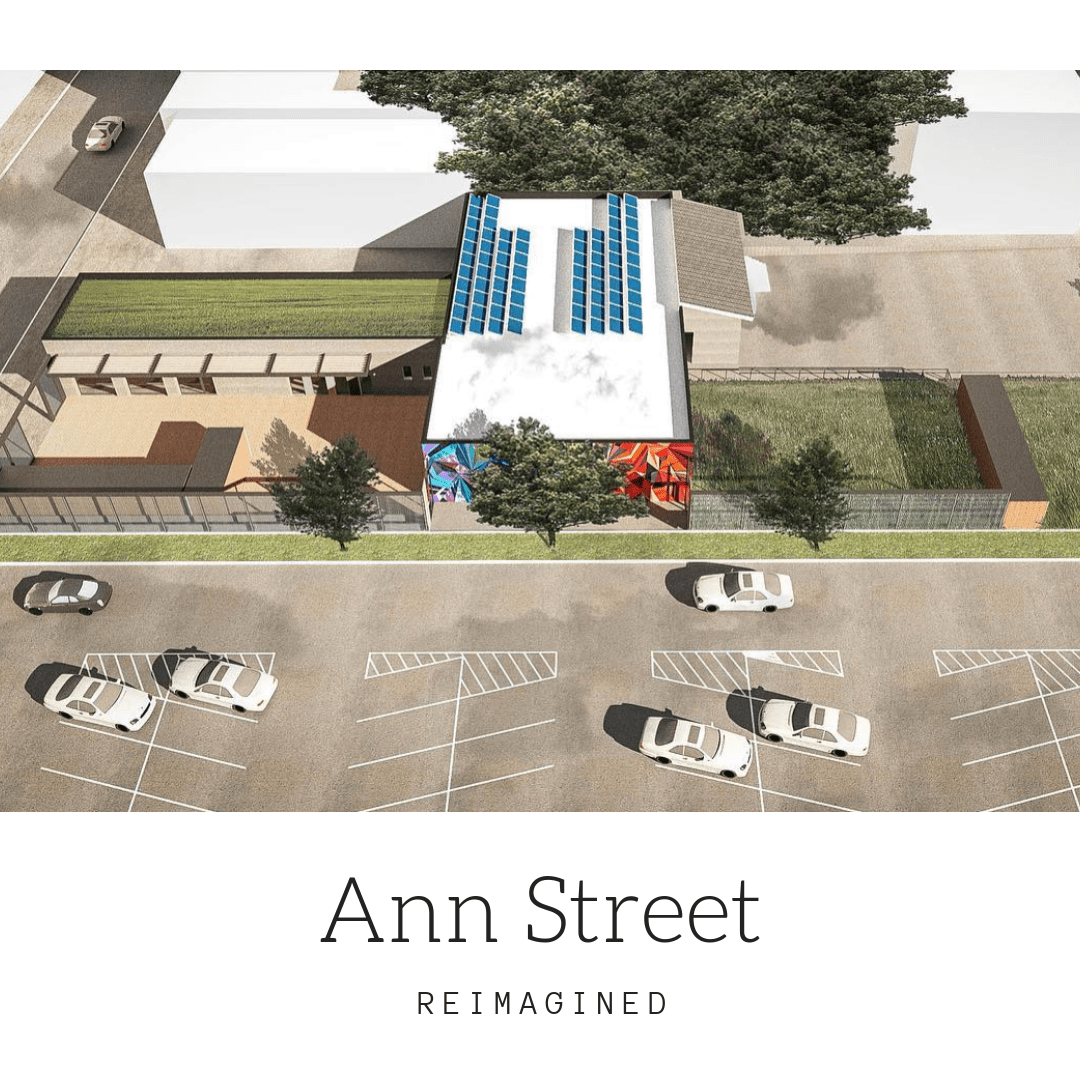 Gita Nandan is standing back and looking up at the flat roof of the industrial brick building she and her partner Jens Veneman recently bought, and Jens is peering back down at her, a ladder spanning the distance between the two.

It’s early fall, the air is crisp and they are dressed for demolition work . Their faces are set with steely determination under a thin patina of demolition dust.

I see that look a lot around Newburgh: determination and literal grit.

From Red Hook to Newburgh

Gita and Jens have a home in Red Hook, Brooklyn where they’ve lived for twenty years.

They’ve been active there in the arts community and in promoting sustainability as well as resiliency, especially post-Hurricane Sandy.

Lately, though, they’re in Newburgh a lot speaking with future tenants, working with contractors, dealing with getting plans approved by the city.

All of the necessary and preliminary work to getting their new studio space at 105 Ann Street on track to open by Spring 2019.

What they are doing is not for the faint of heart.

Why? Well, in July, 2018 Gita and Jens bought one of the last, large parcel of available commercial real estate in the heart of the city of Newburgh. It is situated just west of Liberty Street between Ann and Washington Street.

As we walk the property, I sense their excitement plus the fact that they realize they’re in pretty damned deep. This is a big deal project!

I don’t sense trepidation though, just quiet confidence. They’ve done this before

Finding their way to Newburgh

They arrived in Newburgh the way most makers do: on a hunt for affordable space.

Jens is a fabricator and a sculptor who lost his studio many years ago. Ever since both have thought about looking for a new space but never did so in a serious way.

A few years ago, they started to. At first, it was New York City, close to home. It didn’t take too long to realize that per their wallet, NY wasn’t tenable.

So, they looked outside the city at places where real estate might be affordable but didn’t find what they were looking for.

An architectural rendering depicts a project Gita Nandan worked on with her firm, Thread Collective. It offers a glimpse into how 105 Ann Street interiors might appear.

Jens career as a fabricator and sculptor (he has worked and managed the studios of well-known sculptors, like Tom Otterness)  brought him into contact with Dick Polich’s foundry.

Jens also had occasion to cross paths with Newburgh Metals, a well-known source artists use for metal fabrication that is located in Newburgh.

One day, while on vacation with an artist friend they had a breakthrough in their search when she said: “why don’t you go look at Newburgh?”

They did and so here they are two years later. The building is purchased, and they are ready to begin work on the 8300 square foot space.

Aware of their proximity to the Storm King Art Center, and the area’s history with the internationally popular art form, Gita and Jens also dreamt of purchasing a plot of land in the city where Jens can build out a sculpture garden.

Through their journey, they even got close to purchasing a piece of property for the garden, located on the outskirts of Newburgh, but that deal fell through.

For now, they are focused on Ann Street.

Gita is the perfect steward for this property. Besides being a well-known architect (her architectural firm, Thread Collective, emphasizes connecting a property from inside to the outside) she also teaches at Pratt and espouses a philsophy of sustainability. 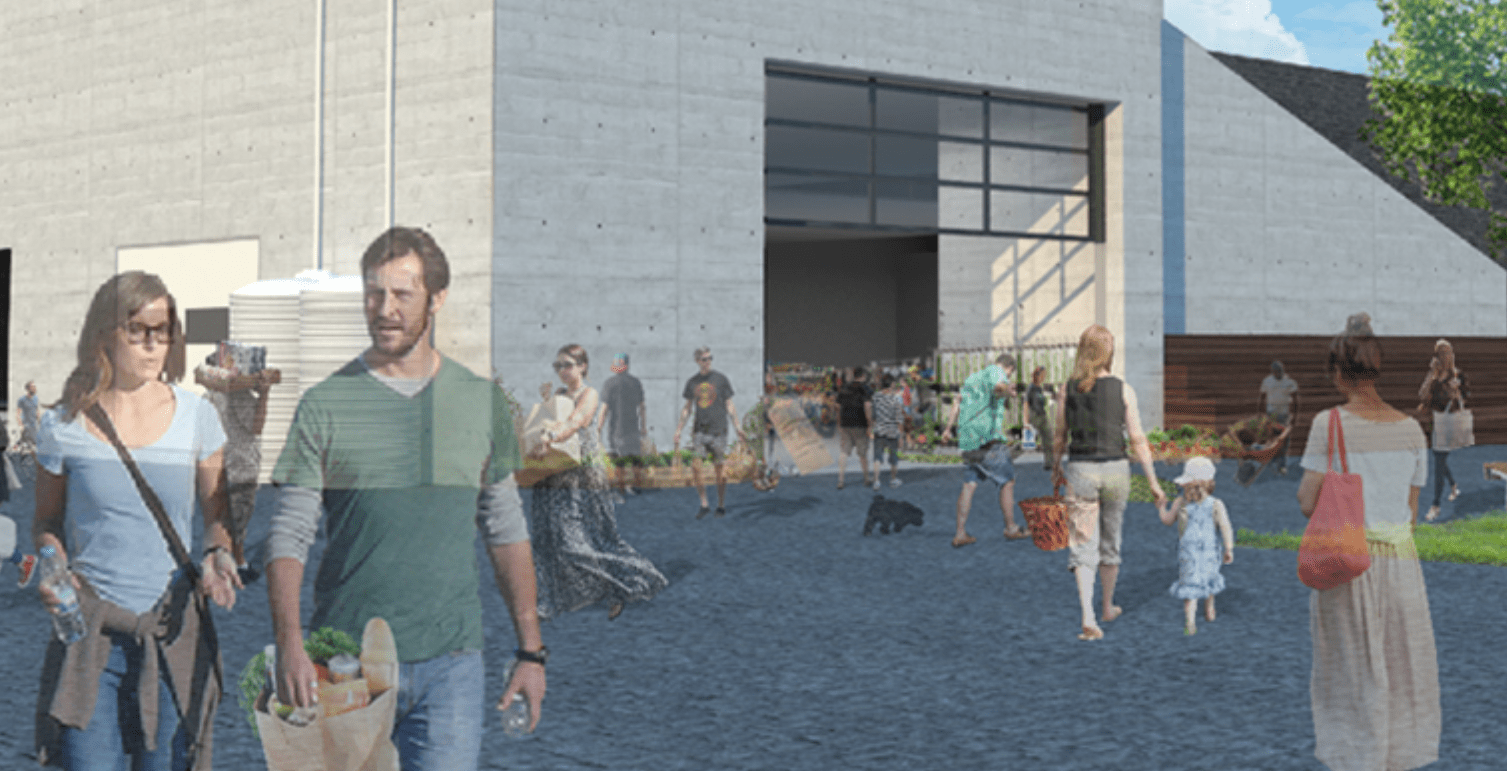 As they begin executing on the reimagining of this property they will also be, in a not so small measure, creating a reimagined neighborhood. The project (they are toying with calling it The Ads Warehouse) will have a sizable footprint within the Liberty Street area in Newburgh’s East End Historic District.

It’s an area that has seen activity recently with lots of new stores, restaurants, shops, and galleries opening.

Jens and Gita are excited they will finally have large studio spaces, with walkability and they are delighted they will have the freedom to ride their bikes, something they do in Red Hook all the time.

She jokes that if Broadway and ultimately route 17 were safer, she could bike to Stewart! I sense that in years to come Gita’s gonna change that, a good thing.

Gita keeps coming back to the notion of the location of the space (it’s around the corner from nearby shops, restaurants, and events) as being crucial to what sealed the deal for them. “Newburgh’s a walkable city,” she offers.

She sees one side of the building as “the public or retail” side.

That would be the Ann Street wing, it is 2000 square feet and it will be divvied up into two separate spaces, a 1200 square foot space and a center area which is 600 square feet, plus area for art spaces (or other uses).

Some ideas for tenants as well as uses for the spaces are a restaurant, a retail space, and a “community room” which will be rented for pop-up events, art shows, book readings, food gatherings, community meetings, etc.,

Gita also has big plans for the plaza courtyard which will be in the current parking space adjacent to the city’s public parking.

The courtyard will have outside food trucks offering a variety of cuisines.

To create privacy, she will design a green wall with plantings as a buffer.

These plans represent the “public or retail” side of Gita and Jens’ space.

The “us” or private side, on the Washington side of the Street, will be Gita and Jens personal studio space. Some of that side will also be divvied up for artists and businesses.

Everything will be energy efficient. There will be lots of internal glass facades looking into each bay, sandblasted concrete floors, exposed joists, as well as a large glass window fronting  Ann Street.

Ideally, if all goes well, there will be a “soft” move in for the commercial spaces in early spring.

The courtyard will have to wait two to three year for a final finish, but Gita envisions staging it so that even by next summer, there may be some outdoor dining.

On the Washington Street side, an outdoor garden is planned. 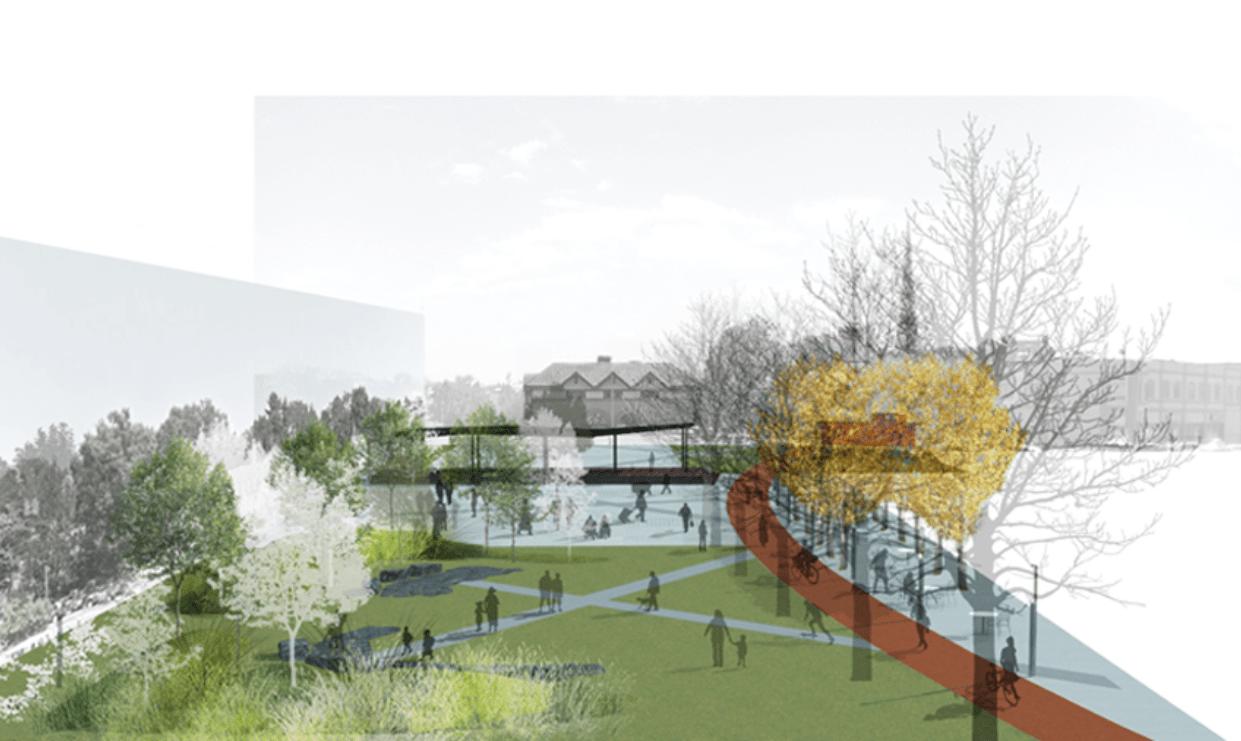 This video of 105 Ann Street (prior to sale) shows the property before the sale and shows the surrounding area.

If you are interested in contacting Gita or Jens regarding space in the building, here is the contact information:

All images from threadcollective.com by permission of the architect