Beauty startup began as a journey of self discovery

Allyson  Springett refers to herself as a “kitchen beautician.” Her company, Mystique Natural Hair Products is a beauty startup that began as a journey of self discovery.

The genesis of Allyson’s company began in so many places, it’s almost impossible to mark exactly the time and place her journey began.

Was it after working for many years as a high performing sales achiever in tech?

As a sales pro, Allyson crushed quotas and entered million dollar sales clubs, but her talents were sometimes over looked, so she began to look for a way forward and out of a race that didn’t seem particularly empathetic to hers,  at a time when the glass ceiling was barely visible.

You see, about a decade or so ago Allyson had started having mysterious and troubling medical issues:

A cousin’s hospitalization pointed Allyson in the direction of discovering the cause of her strange symptoms.

The cousin was diagnosed with Lupus, and after speaking with her aunt, Allyson recognized much of the symptoms her cousin had, she had!

“I went to the doctor who I had been seeing, and told him of the similarity between my cousin’s symptoms and mine. He tested me, and called me up and basically said, ‘holy cow, you have the same thing!'” Allyson explained during a recent visit we paid to her at her office at the Orange County Accelerator.

Her doctor warned her that not only might the meds she would need to take possibly cause weight gain (the metabolism is affected), her hair might also start to fall out!

Allyson pointed out that black hair is already fragile, but Lupus escalates the hair’s fragile state.

“I didn’t want to lose my hair!” she exclaimed. 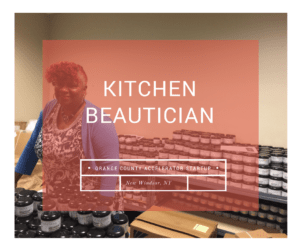 In an effort to counter any damage from the medication, Allyson began concocting hair product just as she had done as a girl, only this time in her own home.

“I actually made Release Your Potential Hydrating Parfait first!”, she said recalling the first product of her now many beauty products for hair.

After using the product for a time, Allyson’s hair responded and beautifully: so well, her doctor told her she was the only patient he could not read in terms of how sick she was because the condition of her hair was so good.

In fact, the doctor invited her to come and speak to a women’s groups of patients with Lupus and other auto immune conditions as a kind of motivational speaker.

As Allyson spoke month after month, she noticed the group growing into a crowd that progressively got bigger and bigger.

At the same time, her enthusiasm for work was waning.

One day at her tech job, in an effort to create some team enthusiasm, each member of her group was invited to do an essay to recount what gave them enjoyment and escape over the weekend, and each member was invited to present the idea.

After she had presented to the group, Allyson left the podium, and her boss observed that it was clear she enjoyed creating her beauty product line more than she enjoyed selling in the tech world.

A short time later, while at dinner with friends, Allyson announced “I want to own my own business!”

Her friends, supportive, suggested that her hair products be turned into a business, and Allyson knew the time had come to get serious about a move.

She began collecting ideas and organizing her priorities, goals, and objectives.

She arranged for a meeting with an old friend who was also a businessman. She was looking for a mentor.

He agreed to look over her ideas and try her products.

A few days later he called, a believer.

Apparently he had tried one of the products on his daughter’s hair and for the first time she wasn’t crying when he finished styling her hair.

The businessman announced that instead of being a consultant, he wanted in as a partner!

Eventually, Allyson was able to get her product packaging finished and began bottling.

She then approached the Orange County Business Accelerator about her line and was offered an office and support:

“The Accelerator has allowed my business to grow. They have been instrumental in helping me create a business plan. They took all my information and helped make it cohesive and coherent, by putting all the pieces of the puzzle together. In fact, they helped me make a better picture!” she says, seated in a bright modern office at the Accelerator’s location in New Windsor, N.Y., and surrounded by jars of hair product.

“The Accelerator introduced us to attorneys who helped us research patents and understand business law!”

Allyson also took advantage of the many classes in marketing and office standard operating procedures offered at the Accelerator on a regular basis.

“In September 2016 we were able to move from our home to this facility in New Windsor NY, on the base of Stewart International Airport, and we are shipping all our product from here!” she observes.

Allyson cites Solange Knowles (Beyonce’s sister and a celebrity performer in her own right, Solange has become a “natural hair” influencer) as an inspiration and calls her “my hair crush!”

Like Solange, Allyson is on a mission to help young ladies learn and embrace their hair in its natural state before they resort to relaxers.

Allyson is a recipient of the Entrepreneur of the Year award by the NYS Beauty Culturist Association, and she will be a featured speaker at the November 12th, Natural Hair Industry Convention to be held in Atlanta.

Springett’s business partners are O’neil Thomas, a pastor, and JD Richards who is a trichologist, a natural hair stylist, and who worked in product developer for L’Oreal hair products for over 24 years.