Discover Ceramics Classes And More At The Newburgh Pottery 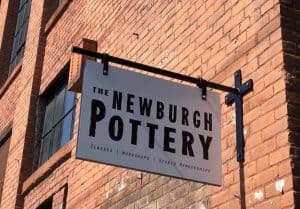 “There’s so much momentum in the grass-roots, small business renaissance here, we all feel like we’re writing a new chapter in the Newburgh book together.”

Ceramics classes for all levels, and, for now, a pivot to more design and production

A little over a year and a half into running The Newburgh Pottery on South William Street, located in the Atlas Studios building, David and Jenny Moldover are having a wonderful time. “It’s been working out so perfectly,” says Jenny.

There have been full up workshops and classes for all skill levels. Dedicated clay workers have gotten memberships, with dedicated shelf space and free house glazes and clays.

The studio is a most welcome addition at Atlas, and enthusiastic Facebook reviewers rave about the “awesome, personable and talented” ceramics instruction, the quality of teaching in the children’s ceramics classes, and the advantages of being a member of the amply supplied and well-organized space.

For the moment, that aspect of the business is on hold. But the Moldovers say that reopening is not a question of “if,” just of when.

“It’s hard to plan for a reopening since we don’t know when we’ll be able to, or what the world will look like when we can.

Wee have no doubt that eventually our classes and workshops will be able to safely resume, and that we’ll be able to hang in there until they do,” says Jenny.

“In the meantime, the world and our wheels have to keep turning, so we’re pivoting more into our design/production side of the business since David can do that remotely.”

Running through all the offerings is a reverence for the ancient culture of clay in human civilization mixed with solid business sense. 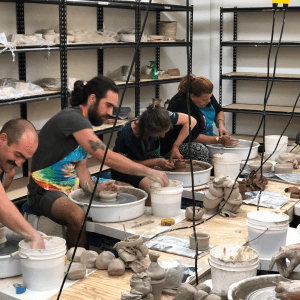 Patrons enjoy the sense of community they get when working in clay. Photo: Brian Wolfe

And while public classes are on hold until it is safe to restart them, the commissions are going strong. “After all, designing and making pottery is what we do best!” Jenny says.

“We’ve set up a cozy shop in our garage, and David’s been designing and producing new lines of wares. Since we don’t know what will happen to the weekend Markets, our preferred way to sell, we’re in the process of getting an online retail shop up and running – which is actually a really exciting opportunity.

People can follow along on Instagram or Facebook (@thenewburghpottery) to see sneak peeks of these wares as they’re being made, and for updates on when they’ll be available.”

David and Jenny Moldover met in a ceramics class at Marymount Manhattan College.

David, who’d grown up in North Jersey “feeling vaguely envious of my artsy friends,” needed elective credits and the ceramics class drew him in on a gut level. 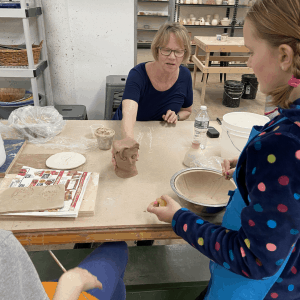 “I remembered Dad whittling and his wood lathe.

When I saw that I could take ceramics, the image of him turning bowls flashed through my head,” he says.

Little did he know that that decision would lead to a career path — or that he’d meet Jennifer Mittica.

Jennifer is an art history major raised in the Vermont woods by a mom who’d always noticed and encouraged her creative instincts.

“Everything fell into place when I met Jenny,” he says. 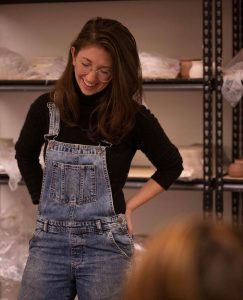 “In class, we learned the skill sets that take enormous time and diligence to master, along with the deep history and philosophy of ceramics stretching back to the dawn of civilization.

The more I learned, the more I admired the people in that world and wanted to be like them.”

On graduation, Jenny found an arts management job in TriBeCa, and David worked his way into the studio world, willing to mop floors if it meant time on the wheel at some point. “One job led to another,” he says.

“There are community studios all over New York, of necessity — who has room for a wheel and a kiln in a Manhattan apartment? — and I worked my way into management at La Mano. I was renting space there and they were hiring management; I said I’d like to learn the business. 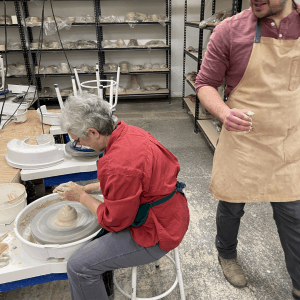 A professional ceramicist at Newburgh Pottery

“They said it was fine as long as I didn’t open up right next door, so I got a chance to learn everything hands-on: negotiation,  equipment, time management, balance. How to make it work.

And I saw how uniting it is — in Manhattan we had Broadway and movie stars working alongside teachers, lawyers — all kinds of people enjoying a shared passion together. I knew that was the kind I wanted to open.”

Jenny, meanwhile, had established herself in the chairman’s office at Christie’s. She still heads into the city to manage collections, appraisals, and auctions for the freshly launched Gagosian Art Advisory.

“I love being part of all that hustle and then coming home to the Hudson Valley,” she says. 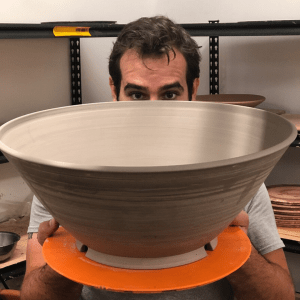 “The city is such a vast world of opportunity, such a tightly packed mass of artists and studios. It can be a grind, but we love it and suck up every drop of inspiration and learning we can get.

And there’s a sense of community within the pottery world; it’s a close-knit group of people with a longstanding philosophy and vision. Pottery is a community driver.”

“The city was the perfect place for that time in our lives,” says David, “but the city can be a treadmill. We were living in Brooklyn, coming up to Beacon weekends, and the idea of more room to breathe…

We’d never really heard of Newburgh. A friend knew we were thinking of leaving Brooklyn to start our own pottery said ‘Hey, my friend just bought a building in Newburgh and he’d be really into this.’”

That building turned out to be Atlas Industries at South William Street, and from first glimpse the Moldovers shared a strong sense that it was perfect for their endeavor.

After a year in business, that feeling has only grown. “Last fall we had the Open Studio Tour organized by Newburgh Art Supply,” says Jenny, “and it was huge.

There were almost 200 artists, up from ten when they started nine years ago. Being in the fine art world, high-level curation, I see a lot.

The caliber of the work being done here is so impressive and the level of skill and talent is mindblowing.”

Both within and beyond the Atlas community, the Moldovers say the Newburgh scenes fit their vision and lift their spirits. “There are so many great people collaborating and creating and supporting each other,” says Jenny.

“You walk down the street,” says David, “and everyone is just saying hi to each other.  People stop to trade tips and referrals.

Coming from the big city, it’s shocking. But in a great way.”

In September 2018, the couple opened their business and married. (Yes, a wedding and an opening in the same month!)

Jenny’s experience in fine art management and administration has served them well. “I was learning clays and glazes while she was focusing on the business side — we’re very complementary opposites that way.

Right now, we’re a big teaching studio — our students are fantastic!  I’m carefully recruiting top-notch teachers to take on more of the classes.

That way, I can refocus more of my own energy into design and production.

I love doing made to order; there’s always a new project, which is great, but I do have design ideas of my own I want to work on.”

Meanwhile, The Newburgh Pottery’s role as a community creative hub will continue and grow. “We plan to bring in a wider variety of workshops, lectures and artists’ talks,” says Jenny.

“We’ll be bringing in artists from New York City and all over the country to talk about their specialties.

We have a woman coming to lecture about the bond between tea culture and pottery culture. She will speak about Japanese and British traditions, and so on.”

“Every pot is a collaboration,” says David. “There’s a use; there’s an intention, and every culture makes different things.

There is so much more to the relationship and to the art than just making things.”

(As stated above, classes and public events at The Newburgh Pottery are currently on hold due to COVID-19. To stay informed on reopening plans as they develop, follow them on Facebook or Instagram).

For more information on The Newburgh Pottery, visit thenewburghpottery.com or call 201-741-3552.)