Posted in On The Waterfront: newburgh News | Last Updated April 6, 2020 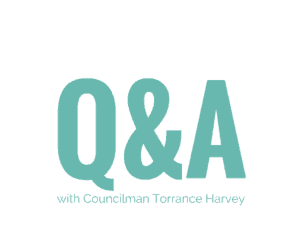 Torrance Harvey, councilman for the city of Newburgh, N.Y., is an affable gentleman with a demeanor that seems both surprised and sincere.

Surprised, because when you listen to him unpack his life story, you realize he has been favored by fortune and has been graced with many amazing opportunities.

Sincere, because fortune is astute, and she often arrives in recognition of earnest and hard work.

It confirms the old saw, “the harder I work, the luckier I get.”

Torrance Harvey chose some interesting paths, and he has worked very hard.

We were expecting to learn a great deal about Councilman Harvey’s career as a school teacher.

And, yes, he certainly is an extremely dedicated teacher whom we can tell has a great love for the field of education, his students, and being an effective mentor.

He grew up as the youngest of eight children raised by hardworking parents who struggled to keep their heads above water in order to feed those eight mouths.

As the youngest of the family, the older sibs (who were quite a bit older owing to a large age gap) were quite an influence on Torrance and his twin (and older by minutes) brother Torrino.

As little boys, they were coming up during the heyday of Soul and R&B, with the following acts at the top of the charts:

These acts ranked across the charts, both in the top 40 as well as the R&B charts. The artists appeared on countless television musical variety shows and television episodes influencing a young generation learning about culture from TV.

The older sibs were no strangers to Soul Train and everything else going on: parties, club going, etc., is what they were up to, naturally, as youngsters in their teens .

And the youngest, the twins, took all this in, and were very influenced by the music and the dance moves they checked out their older sibs performing (Soul Train was a transformative show which exposed white America to black culture and music on a mass level not experienced previously. It grew to have a large crossover audience).

This influence, as Torrance tells it, was the beginning of the twins discovering a love of dance.

Fast forward to high school and hip hop in Poughkeepsie was taking place at the Armory in Poughkeepsie, and the Civic Center, where acts like Doug E Fresh and Run DMC appeared.

The power of dance and hip hop music began to  make an impression on Torrance and his brother, Torrino.

Influenced by other dancers in Poughkeepsie who were exploring popping, and break-dancing, the twins made a decision to discover more about the new dance form.

The two started to hit the projects in the ‘hood,’ where community centers featured talent shows.

Teens would demonstrate their dance moves, and Torrance and Torrino started to learn how to pop and lock.

Soon, the twins were fortunate to perform on the street in Manhattan and perform at the Paramount, and they began to generate interest in their talent.

Eventually, they connected with a management team out of Poughkeepsie ((Derek Wilson and Barbara Baker).

Because of this team, the twins soon got a gig on Club MTV when hostess Downtown Julie Brown was in the house.

Club MTV was like a contemporary version of Soul Train,  capturing the styles of dance that were becoming more and more popular in cities across the country as breakdancing really came into its own.

Club MTV gave them tremendous exposure both nationally and internationally, and the name of the act became the TNT Twinz.

Keep in mind, these two boys were all of sixteen years of age, high school sophomores!

The notion of studying for the PSAT’s was obviously out of mind.

So how did these two, with an act that was getting international acclaim, make the move to college?

By the time the two were seniors in high school, they were starring in equity production plays on Broadway, actually in a rap version of a Shakespeare play that launched the careers of many other black rappers and actors. 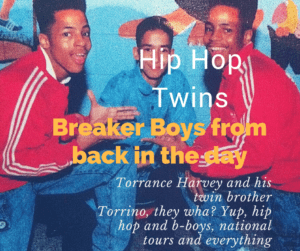 Picture of the young twins from back in the day

John Jay, the high school the twins moved to, was, as Torrance puts it, a bit like “Weird Science” with the equivalent of summer toga parties, amidst upper middle class kids from comfortable homes with backyard pools and a lifestyle different from that in Poughkeepsie. It was IBM land, a place where well compensated executives and their families were living the good life.

As affluent white kids became a new set of friends for the twins, they were confronted with questions like “where are you applying to college?” And, “how did you do on your PSAT’s?”

Both questions were foreign to the young men. But a providential meeting was soon to occur because of an unfortunate family development.

Sadly, for their family, and especially for the two-high school aged twins, Mr. and Mrs. Harvey’s marriage suddenly and unexpectedly broke up.

The twins, to be able to finish up the last six months of high school needed to stay at John Jay, but they had no place to live.

Torrance explained, “we lived out of our car, and for money we worked at the local Fishkill Holiday Inn.”

But this development would also prove to be providential.

One Sunday while working brunch, they had the occasion to wait on the Reverend Saul Williams, of. Newburgh, N.Y., who was investigating the Holiday Inn as a venue for his daughter’s upcoming wedding.

The boys and the Reverend struck up a conversation which soon had him peppering them with questions.

The Reverend then invited the twins to join him for church in Newburgh, where he was pastor at Baptist Temple, a church Reverend Williams founded.

He did not know of their MTV fame (nor did he know they were homeless) but his children knew the teens from Club MTV.

Torrance and Torrino went to church at Reverend Williams church and told the pastor what was going on in their lives. The Reverend arranged for them to move to Newburgh where gentlemen such as Deacon Larry Lindsey of the Baptist Temple,  and William Walker began to mentor the boys.

Of Deacon Larry Lindsey, Torrance said “Such an informed man you could ever meet. He worked on Wall Street, he had masters from NYU, he became my mentor!”

At some point after the twins had joined the church Deacon Lindsey and Reverend Williams put the them in a room and, Torrance recounted, said: “you have to go to college!

“They plied us with reading material (works by  Carter G. Woodson; EldridgeCleaver; Malcolm X) and told us ‘in a year from now, you will both be in college!” Torrance said, continuing:

“We looked at Fisk, but I asked the Pastor, ‘Can I get into Morehouse?’

Councilman Harvey stands with students a fundraising booth at Newburgh Illuminated 2017. The students were fundraising for a trip to Ecuador which they have since completed.

“His body language seemed to say no, but Pastor was a man of Christ, and he said ‘yes.’”

Torrance was intrigued by Morehouse. He filled out college inquiry cards and sent them to a few traditionally black colleges besides Fisk: Howard, Hampton, and Morehouse.

But it was Morehouse that really intrigued him, as he explains:

“What intrigued me about Morehouse most was it was all African American, all male, with a mission to educate and train African American men to become future leaders. I knew that Spike Lee went there, Martin Luther King, Samuel Jackson, Julian Bond, and so many other leaders.

“Honestly, I looked at the requirements and felt it was a far distant reality.”

In fact, one of the Reverend’s children was studying at Morehouse: Saul Stacey Williams.

Torrance: “We went and stayed with Saul at Morehouse, but we got no sleep! It was eight of us talking, building…they asked us, ‘what’s stopping you? What’s standing between you and this goal? To which we answered: ‘We don’t have the grades! We don’t have the SATS!’”

But Torrance and Torrino thought about it and discovered they could enroll in a special program at Mt. St. Mary college which helped them overcome their issues and prepared them. Torrance as he relates this is quick to note the hand that Sister Ann Butler of The Mount had in helping he and his brother:

Ultimately, Morehouse did accept them, and they were able to graduate with undergraduate degrees, all the while still performing and with notable stars like Oprah Winfrey and Steevie Wonder.

A young Torrance Harvey in the Oprah Winfrey ABC Afternoon Special “Girlfriend,” for which he was nominated for an Emmy Award

Councilman Harvey did us the honor of answering several questions we asked him about what inspired him to seek office, what he hopes to accomplish as councilman, and several other very illuminating questions in our Q&A.

Thank you, Councilman Harvey, for sharing your stories and your vision.