US consumers went shopping in May using retail therapy to overcome the months-long lockdown stemming from the COVID 19 Pandemic.

A May retail sales rebound with stronger-than-expected numbers reported June 16th showed a gain of 17.7%, particularly in apparel sales which were up according to KPMG an astonishing 188%.
Now, on a local level, it is a reasonable expectation that the fatigue of lockdown will similarly translate into a rebound at retail shops on Liberty Street and Broadway, for shops like Cream Boutique, Newburgh, that is the hoped-for result. 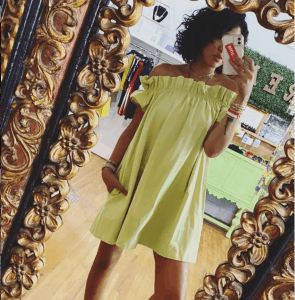 “People are excited to come out and shop and support businesses.”
According to the online trade journal progressivegrocer.com:
“The latest “Deloitte Global State of the Consumer Tracker” found that 42% of U.S consumers feel safe enough, from a health-risk angle, to return to physical retail stores.
That’s a significant improvement from about 34% of U.S. consumers who said the same thing in late April. Deloitte based its latest findings on a survey of 1,000 U.S. consumers conducted between May 12 and May 16. 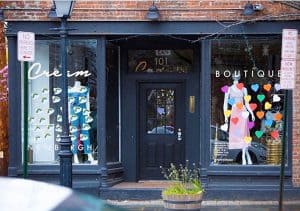 In 2016, Amal Ishak first ventured beyond the destination restaurants of Newburgh’s waterfront up to the Liberty Street area in Newburgh’s East End Historic District.

“Whatever is happening here, I want to be a part of it,” she told her husband.

Less than a year later, in January of 2017, Amal held the opening celebration for Cream at 101 Liberty Street.

The boutique won Hudson Valley Magazine’s “Best Of” award that same year, soon to be followed by a sister shop, Cream Vintage, just around the corner from her current location at 118 Liberty Street.

It becomes pretty obvious to anybody talking to Amal, Cream is a personal goal fulfilled. Just visit her website, and she gets straight to the point on its ABOUT page.

In three sentences, she articulates her life’s dream and her personal commitment to the world of fashion and to offering chic, affordable apparel to women as embodied by her boutique.

“CREAM is my Dream. FASHION is my Passion. Shared love of fashion and Newburgh led to the birth of Cream, a women’s boutique carrying the most exclusive fashions and showcasing the latest luxury trends at affordable prices!”

Amal’s life before Newburgh consisted of hour-long commutes from her home in New Windsor to work in New Jersey.

After having two children, she says, “that became too much for us.” She wanted more time with her family, less time in traffic.

The desire behind Amal’s dream realized is the same motivation that has led many an entrepreneur to create a Newburgh venture, which in turn boosts the city’s forward momentum.

With its gorgeous surroundings and architecture, cultural diversity and sophisticated heart, just an hour from the city, Newburgh is the perfect place to balance urban satisfaction at a slower pace.

Amal’s discovery has been shared by a growing number of startups, artists, manufacturers, retailers, eateries, and crafters in recent years as detailed in our stories here, here, and here.

She credits some of the success of her own business and the rebirth of Liberty Street and Broadway in Newburgh’s historic East End to the cross-promotion she has received from A River of Opportunities, this website’s workforce development, commercial real estate and civic promotion marketing campaign.

“A River of Opportunities has been amazing in marketing and putting the word out there for all the new businesses,” she says. 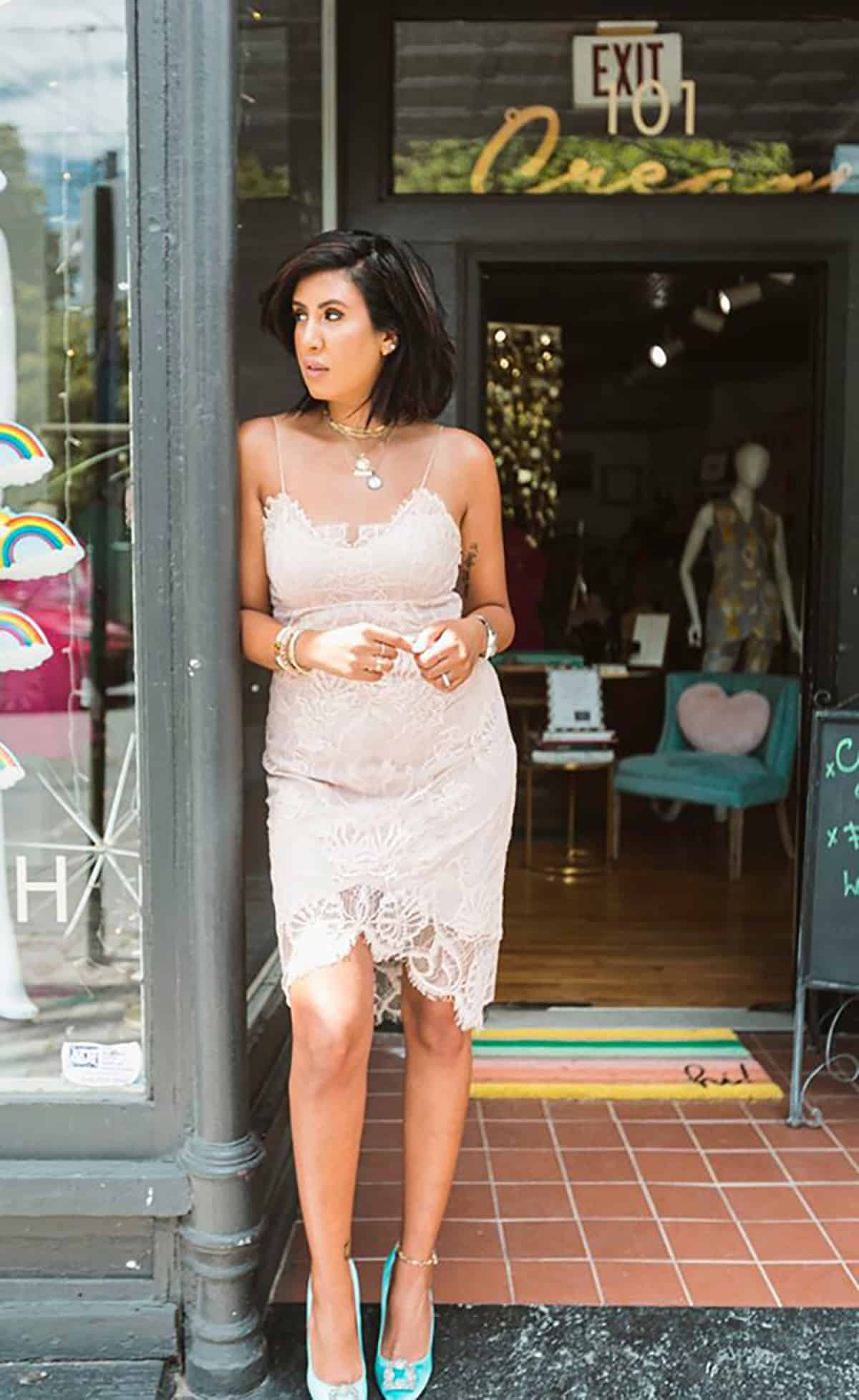 Amal Ishak in front of her shop. She models a dress carried by Cream. Photographer, Dean Brady

What Cream has going for it is that Amal Ishak loves her clients and they love her back. “You get to know your clients. You know what they like, you know what looks good on them and what doesn’t.” 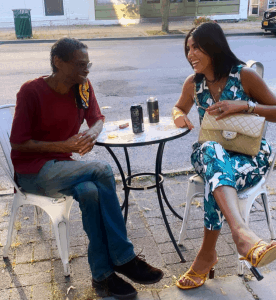 Amal and friend, Rodney Hardison, chat over drinks al fresco at The Wherehouse, a popular spot on Liberty Street.  Amal and Rodney both discovered their shared heritage, as she is Moroccan,  as was Rodney’s father.

That level of attention to detail has kept local support for her business going throughout the past two and a half months. But uncertainty is still real.

“I have a few clients who have lost their jobs and can’t shop the way they used to,” Amal says.  “I also have a few clients who say even after the lockdown is over, they won’t leave their homes for a while. It’s a little nerve-wracking for me. But I do think this has made us appreciate each other more. Appreciate our friendships, our families.”

As Cream Boutique in Newburgh has re-opened, accessories have proven to be in high demand.

Despite local deliveries and free shipping, many customers still want to come and pick up curbside. “I think people want a little sense of normalcy,” she says. “I don’t live far from the stores. So for my clients that want to pick up, I give them my cell phone or they can DM me on Instagram and I can run there and meet them.”

Amal has taken note of the rising interest in fashion careers in the Hudson Valley and has suggestions for the newbies on where she thinks things are likely to go.

“Start with the basics. People love basics. And I’m not just talking about t-shirts, you know? Especially with this pandemic. It’s taught us to appreciate the simple stuff. Especially comfort. I feel like we’re going back to easy silhouettes, softer fabrics, and comfortable, breathable wear.

But most important of all, she says, is the warm and respectful bond with the customer. “I buy for a woman’s body. It doesn’t matter your size, you’ll always find something. My biggest challenge, which I love,  is when certain women come in and say ‘I don’t wear this’ or ‘I can’t wear that’ and I always just say, ‘All you have to do is try it on. You have nothing to lose if it doesn’t look good, it doesn’t look good.’ And I love seeing that reaction when someone tries something on and they say ‘Omg! I didn’t know this would look like this!”

Newburgh has faced many challenges and previous pandemics.

Social distancing, while imperfect as everywhere, has been widely respected.

What Newburgh is facing now beyond a new normal of “COVID 19” is a reality that an emphasis on equity, correcting racial disparity, and realizing justice are themes that will not be temporary, and shouldn’t be temporary.

When faced with escalating racial tensions nationwide in the last week of May, the city’s mayor, Mayor Torrance Harvey,  joined by a city councilman, local police, and city activists quickly agreed to a peace treaty; a few days later, the NPD knelt with protestors to signal a united path forward.

Having faced so many challenges in its history, Newburgh is an experienced community, well-positioned to make the most of what comes next. Cream and Cream Vintage may be forced under one roof for a time, Amal is not sure — but her commitment to fashion and to the community isn’t going anywhere. “Moving to Newburgh,” she says, “was the best decision I have made.”

As for what’s hot in her shop right now?

How to find Cream online