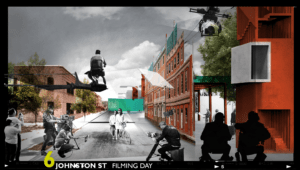 The Hudson Valley has been designated a Film Tax Credit region, and entrepreneurs are investing in Newburgh building out film production service centers here, as noted in our recent article on Umbra of Newburgh.

What particularly resonates, however, is that what’s occurring now echoes the vision laid out by Columbia University GSAPP students (Graduate School of Architecture, Planning, and Preservation) who partook in the Urban Design Program’s Hudson Valley Initiative back in 2014-15.

This vision is coming to fruition as of 2019.

In 2014 and 2015, students from the program descended on Newburgh and considered her through a number of lenses.

One particularly prescient lens was the Lights, Camera, Newburgh folio project which sought to reimagine different ways that Newburgh’s streets could be used in film production.

This student-led research project was created by:

The students zeroed in on the rich variety of potential locations the city of Newburgh offered: urban, historic, Hudson River and Hudson River Valley scenes are abundant.

Numerous business possibilities and growth were presented as an achievable workforce development opportunity by leveraging the NYS Film Tax Credits to  “reimagine the city as a film machine.”

The project’s strategy built on momentum generated by emerging small businesses and trends, such as a shift in demographics, as well as a growing artists community occurring along Liberty Street creating “support programs for all phases of filmmaking,” as a project recap document states.

Little did the students imagine, at that time, the impact that Newburgh’s growth coupled with film tax credits in hastening rapid growth of the city as a film destination.

Watch this incredible vision of a future Newburgh as envisioned and created by Columbia GSAPP students.

A public/private non-profit to facilitate

In the students’ project, an imagined non-profit they called PROP LAB, would facilitate Newburgh as a film-specialty city.

The non-profit would repurpose sets, create film towers and offer pre and post-production facilities, becoming a nexus connecting services across the Mid Hudson Valley, and connecting the film business (and others) from New York City to all across the nation.

There are signs that Newburgh is, indeed, heading in this direction.

Specialty set design companies like Murmuration detailed here, and other companies such as Ramos Upholstery, detailed here, are already working in the service of the entertainment industry and, like Newburgh, are growing rapidly.

Most significantly, Umbra of Newburgh and Choice Films, as well as their partner, Blacc Vanilla Community Foundation as described here, are neatly fulfilling the GSAPP students’ vision, if not precisely, then nearly.

Umbra, while not in the Liberty Street, East End Historic District Corridor, provides amazing opportunities with its 16,000 square foot shooting stage, and Enhanced EnvironmentsSM  capability which is a new twist on classic film production techniques which seamlessly merges the sightlines of live sets using media (LED, projector, etc.)  integrated through proprietary controls, on as large a scale as needed, while allowing talent and crew to visualize actual environments.

Vintage cars on Liberty Street for a location shoot

GSAPP continues to explore the region with its Hudson Valley Initiative which, according to its website, is a “research platform and archive that combines the strengths of GSAPP’s programs to build partnerships and projects in the region, as well as facilitate inquiry into the American landscape more broadly.”