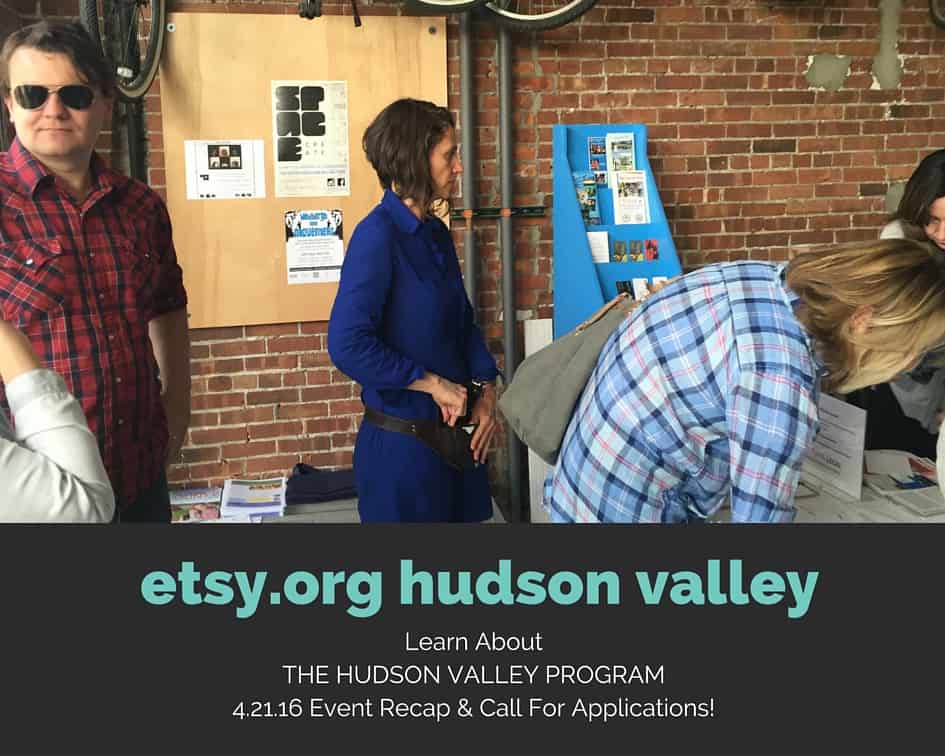 Prior to the start of the talk, Ms. Dorn  the evening’s speaker invited attendees to briefly state their interests and entrepreneurship, as well as where they were from.

Their interests were varied – a young couple plan to open a vinyl shop for recorded music, but they described using an alternative material to vinyl; a woman from Kingston is a music festival organizer; one man described himself as a reiki healer – and they all live in the Hudson Valley.

From there, Ms. Dorn  jumped right into the how, what, and whys of  etsy.org’s vision of the Hudson Valley Program.

She explained that the program is based etsy.org hope to offer an alternative to the startup narrative that has influenced accelerators and incubators. Think slow food, but for startups.

Other influencers mentioned too. One name in particular was mentioned throughout the evening was Judy Wicks.

Judy Wicks is an entrepreneur, author, speaker and mentor working to build a more compassionate, environmentally sustainable and locally based economy.

As Erica dove deeper she discussed a business approach based on deep scale and explained that Matt Stichcomb (a founder of Etsy) and she initially discussed wanting to try a new kind of business education that would help scale businesses and business curriculum.

As envisioned for the original program, not only were the cohorts to be mentored, they were to mentor one another and, finally, on a larger scale, mentor to the community.

The program now and as originally envisioned is not solely for etsy sellers, instead it includes a diverse group of individuals from all life-stages with business skills, life skills, and connections. The pilot program brought together 22 entrepreneurs into the NYC Regenerative Entrepreneur Program. It lasted for four months.

Dorn explained, The Hudson Valley Program version is a little different, since it will be a six month program with a desire to connect the Hudson Valley across its six counties

She described looking for both individual influencers to be applicants and encouraged individuals and those with a wider sphere of influence, such as those found in The Arts, Religious Organizations, even Government Organizations, to apply. Dorn described a process which would go deep into:

Etsy.org is currently looking for 25 fellows to comprise the Hudson Valley Program cohort. There are 12 total sessions, 6 are emergent and 6 are undesigned.

The program will run from June until December, and the deadline for applications has been extended to May 9th.
We encourage everyone who thinks they are a candidate to apply and to visit here for news and updates!