Newburgh N.Y. has neighborhoods imbued with a history of past manufacturing and business triumphs mirroring America’s economic ascension.

A drive down streets in any part of the East End Historic District leads the curious past magnificent, historic commercial real estate.

Present day manufacturing is starting to return, slowly and on a very small scale, but it’s happening. There are stories hidden behind the doors that open into wide open expansive spaces.

Passing by buildings is like going on a buried treasure hunt: you never know what you might find hidden behind Newburgh’s factory and warehouse doors.

There are buildings within a stone’s throw of the Newburgh Waterfront that house a variety of businesses consisting of workers and makers who are busily creating interesting and artful things behind weathered brick facades.

However, little is offered by way of signage indicating what sorts and types of businesses are hidden within.

In decades past, women and men found work, wages and dignity employed by the dozens upon dozens of shipping, manufacturing and textile companies located amidst block after block of Newburgh neighborhoods.

Seafood shipped from Maine needed to be unloaded, arriving from railroad lines like the New England and New York Railroad lines.

Flour came in from the midwest, southern canned goods such as lima beans came up north, tinned salmon came from the Columbia River in Washington State, and so forth.

Newburgh was well positioned as a transportation hub because of its location on the Hudson: brigs and barges could bring goods in to loading docks on the river, and railroads with a network of rail lines and vast expanses of tracks winding throughout the country offered a shipping network which converged in Newburgh, making her a distribution powerhouse.

Then as now the real estate was cheap, far cheaper than anything that could be found in Manhattan and so production and distribution in Newburgh boomed. 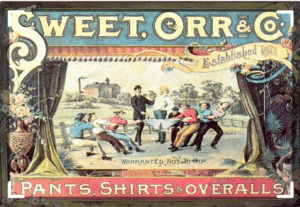 Citizens  lived in the hundreds of Newburgh row houses brick and stick-built buildings that still grace the city, again, block after block.

Wealthy magnates and arrived gentry inhabited the grand homes along streets with names like Montgomery and Grand!

Citiznes worked within walking distance of the factories and manufacturing plants that began to spring up in the mid 1800’s, spurred on by city elders who embraced Alexander Hamilton’s vision of creating a nation state.

The goal was independence from foreign nations for “military and other essential supplies,” and the strategy was building steam engine companies, fabric manufacturing companies, paper box companies and many other and varied manufacturing concerns, in addition to warehousing goods.

One of the property listings recently listed on our site, 40 city Terrace, has a shop front and barn loft, and is on the same street where City Terrace Sports Wear once was located.

Atlas Industries, a maker of fine furniture that moved to Newburgh from Brooklyn (as detailed here) is located in a building that once made worsted yarn and ultimately manufactured mattresses.

What is stunning to consider is that from the early Hamiltonian mercantile era up until the 1960’s and even later, eventually fully 95% of clothing worn in America was made in America.

How that changed as manufacturing off shored to Asia.

Today a renaissance of makers comes to Newburgh to build new businesses in former textile and manufacturing buildings.

The makers are people who are often creative in one way or another, working with their hands in either the arts or in crafts in cottage industries;  others are in small, independent businesses that have survived as makers in an increasingly service-industry economy. 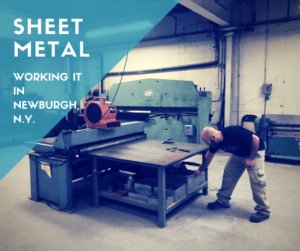 A worker at Harden Sheet Metal

Harden Sheet Metal is one such surviver in Newburgh; thriving, would actually be more descriptive!

Dan Harden who owns Harden Sheet Metal at 26 Liberty Street in Newburgh is a great  example of a maker engaged in the making of something not yet widely outsourced, and experiencing solid business growth all orchestrated from a huge warehouse space he owns.

Dan creates duct work for immense HVAC systems, the kind which heat and cool the campuses of medical centers,  schools, and shopping centers.

Dan personifies so many of the business owners we at AROO (A River of Opportunities)  interview in Newburgh: fiercely independent, proud to work with his hands, eager to grow his business, but not by too much.

Like others, he places a priority on a life-work balance that allows him to enjoy his work, but leaves him time for weekends with his family.

And he takes real pride in the type of work he does:

“We are one of the only guys on a given job who take raw material which we fabricate to specifications (Dan draws up a CAD shop drawing which is then engineer-approved) bring that onsite, and install it.

“In terms of construction, if you think about a plumber or an electrician, they don’t make from raw materials that which they install. We do!

“We go out in the field and sometimes have to shoe horn in the entire system, requiring modifications that we call back to the shop, which then recuts, and delivers back to the field. 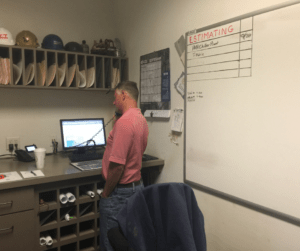 Dan Harden chats with a client

As Dan explains, duct work is a commodity product, “you won’t find it being imported; it’s one of those businesses that has resisted offshoring.”

Dan Harden has a union shop of four to five guys working for him at a time, at the most 16. The workers train at a union hall in Brewster, New York under a four year apprenticeship program. 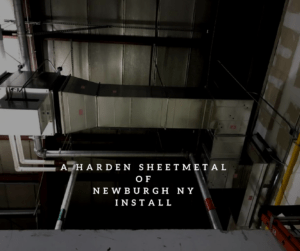 He has recently completed jobs at the Westchester County Airport and the Time Warner Data Center in Mt. Vernon, N.Y.