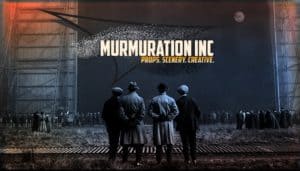 A murmuration is the darting blur of starlings seen as they flock across a grey lit sky.

The birds morph and undulate in waves, liquid as water, amorphous but sculptural.
They move in unified response to turbulences in the environment.

And what is Murmuration, Inc?

Like its namesake, it is also amorphous and sculptural but with an emphasis on scenic design.

And its in Newburgh, N.Y., no less, where the two owner-partners, Jesse Farrenkopf and Jerry Smedley, chose to locate their fabrication and scenic design shop.

Their address is 27 Johnes Street, (also accessible via 26 Liberty Street) where you will find them in a huge, 11,000 square foot space with 10′ to 14′ which was previously detailed here  and also here  (in our story about Dan Harden and his business: Harden Sheet Metal).

Jesse and Jerry sublet (along with another artist/maker) a substantial portion of Dan’s building (he’s a great landlord they hasten to say).

This is the space where they design, fabricate and craft.

They are makers for the immersive, interactive, and site specific experiential theater trend that is re-defining many new theatrical productions, such as Sleep No More

This type of scenic design is part Dr. Who, part BladeRunner, with a little dash of theme park, and a dollop of corporate branding and event planning.

Their work is in demand partly because of the tremendous growth in the public’s desire for real-world experiences such as “escape the rooms.”

There has also been an explosion in experiential theatrical shows such as Sleep No More, the Macbeth play-based experience that has been amazing audiences since March, 2011.

To grasp these experience based offerings, think of Myst, the ’90’s Mac platform software game that encouraged players to journey through a fantasy world.

The player moved from one room to the next, each move dependent upon solving the puzzle in the present room via clues before moving on.

Now, extend the Myst concept into the real world and you can see the connection: virtual-experience games created a demand for similar real-life experience games and the demand is being met in cities in Europe and the U.S. where participants have one hour to “escape the room.”

Or, where participants flock to the aforementioned Sleep No More theater production which is equally provocative, sensational and most importantly, experiential.

Murmuration’s set designing skills of fantastic, near museum-quality props is also sought for event planning, retail window display, and product placement at conventions and in other arenas by big brands such as Nike.

So who are these guys and how’d they get to Newburgh, anyway?

Jesse Farrenkop, a native of Bethel, Connecticut, went to the University of Hartford to pursue a fine arts degree and study sculpture.

While there, he visited the Dia in Beacon  (the modern art gallery located on an expansive campus) and this introduced him to Beacon, where he eventually moved after graduating.

While in Beacon Jesse worked in Manhattan, and on the aforementioned Sleep No More theatrical production.

Says Jesse, “That show was great. I could come there and they’d say, ‘we want to make this!’ or something, and I’d just draw it, do it, and they let me. It was awesome!

“They were always trying to change it, do it over, and they were open to any kind of strange, weird, ideas,” he recalled satisfactorily.

Across the country, partner Jerry Smedley, who hails from the Niagara region of New York, and who obtained a degree in horticulture, had moved to Las Vegas for what he thought would be a short time, but work on sets, and props turned a three month stint into an eight-year long stay.

He worked for MGM International Resorts (formerly MGM Properties) which has an in-house production company for all of the MGM properties on the strip, such as the Bellagio, Treasure Island, etc.,

Designing elaborate event sets for parties such as New Year’s Eve as well as corporate events and large parties kept Jerry very busy, and he ultimately learned sculpting, woodworking, and working with metal fabrication. In fact, he went to school to learn welding while in Vegas.

Ultimately, Jerry decided it was time to leave Vegas, and so he moved east where he connected with Jesse.

They both ended up at The Headless Horseman which is located in the Hudson Valley in Ulster Park, New York, not too far up river from Newburgh.

Nike commissioned Murmuration to construct this fantastic bird for a Nike Air MAX Convention in Manhattan to celebrate the work of Christophe Roberts. The bird was hand sculpted out of foam and painstakingly covered with hand-cut, custom feathers, topped with some automotive-paint finishes on the beak, eyes and feet!

Together they worked on the property’s annual Halloween Graveyard Scene which was heavily pyrotechnic, and impressive in terms of scale, structure and detail. They grew their talents and forged a friendship.

With this shared work background and shared experience background, and with Jesse now living in Beacon and Jerry living in Kingston, opportunities for freelance gigs arose.

They continued at the Headless Horseman and also traveled to gigs where they would build on site.

Ultimately, projects got bigger and bigger until the realization that a building that was big, affordable and easily within reach of Manhattan became a driving need.

The obvious choice for them? Newburgh, N.Y.

Its availability of large manufacturing and warehouse space afforded them the opportunity to get in to a lease situation at a low rate, perfect for a start up business.

It’s position as a transportation hub enables them to get to Manhattan clients as well as attract Manhattan artists to their workshop studio, and they are able to ship their oversize props easily, too.

And, of course, they love Newburgh. They live here, they enjoy the restaurants opening up right down the street from their Liberty Street location, such as Ms. Fairfax.

“We like that this is an artist community, we want to be a part of this town as it grows!” says Jesse.

Jesse has also just moved to Newburgh to be near to his business and the growing artistic community he is happy to be a part of.