Ricardo Fuentes is a Hudson Valley native who owns a laser fabrication studio where his specialty is  doing laser artwork in Newburgh, N.Y.

Fuentes,  who has worked for big brands and big names such as Rachel Ray, Macy’s, and Elton John, is one of many craftsman, creatives, and cottage businesses flocking to Newburgh for affordable commercial space.

Space which would be a small fortune in Brooklyn, but is available in Newburgh for pennies on the dollar comparatively.

The studio focuses on working with designers and producers offering them fabrication and problem solving.

Although not necessarily in that order!

“I grew up in a lab and a shop. My dad was a physicist who had a small business and he had clients via his relationship with IBM doing R&D work in Wappinger Falls. His business segued into high performance semi conductor work and some of the work involved fabrication.

“I studied physics and then worked for my dad, and found myself continuously seeking to work in the shop.” said Fuentes.

“But, as I worked in the shop I realized that the design world and the world of the arts were what always interested me. 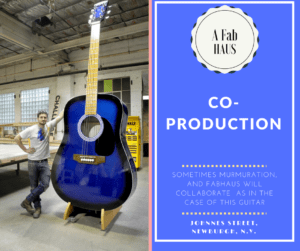 A guitar made by Murmuration who shares space with Fabhaus on Johnes Street. Fabhaus crafted bits of wood that were used to build up

While he was previously located on Main Street in Beacon, Ricardo now happily ensconced in Newburgh, likes the burgeoning scene that is happening, from food, to music, to the arts.

Some of the time he is busy doing one off couture fashion pieces for New York Fashion week.

He’s worked on the Broadway production of The King and I, and sculpted  Christmas and Holiday scenes featured in Macy’s windows (in joint production with his buddies from Murmuration).

Like many of the other “makers” we meet in Newburgh, Fabhaus has an extensive network of local partners including manufacturers, material producers and traditional craftspeople.

This positions him to collaborate with artists and designers by with expert consultation and services.

Together, they create a range of products — from accessories or high-end décor to every-day, commonly found objects.

A specialty is cutting and engraving wood, acrylic, leather, fabric and paper products.

Fuentes also engraves a wide array of other materials including: stone, glass, rubber, anodized and powder-coated metals as well.

Dan Harden’s sheet metal company can even call upon him for small specialty cuts, when needed, for some of Dan’s big installs.

Over the last few months, A River of Opportunities has also talked about the Orange County Accelerator and the work that they are doing to help the “maker,” independent manufacturers in the Hudson Valley.

One such program is the “Accelerator without Walls” program (our friends at You There are in the program) which offers mentoring and technical advice to those individuals who qualify, but who are not in need of being physically located at the Accelerator’s growing campus.

Vinnie Cozzalino of the Accelerator reached out to Ricardo and invited him to participate in the “Accelerator Without Walls,” program (a Hudson Valley incubator program) and now that Ricardo is in Newburgh, he is pursuing that relationship.

You can find Fabhaus online and you can also contact them at their shop: