How a Hudson Valley family of entrepreneurs bootstraps their textile business

Growing a textile business in the Hudson Valley

Robin Hayes, an entrepreneur and real estate investor, is a Hudson Valley born and raised native. Originally from Wappingers Falls, she and her engineer husband moved to Santa Cruz, CA and for twenty years enjoyed California living.

In California Robin began her family, taught, and also pursued other interests.

Robin is entrepreneurial by nature. Working as a Spanish teacher in the California public schools, Robin also spent a portion of her spare time investigating neighborhoods.

She began buying properties acting as a general contractor and rehabbed Monterey Coastal Area real estate. She didn’t invest in upscale Carmel. Instead, she saw opportunity in up and coming areas like Santa Cruz.

About fifteen years ago Robin moved back to the Hudson Valley and with the same enthusiasm with which she had pursued interests in Santa Cruz, jumped right into the mix of raising her family, pursuing work, and rediscovering the beautiful Hudson Valley she loved, settling in Gardiner.

No longer licensed to teach (her license didn’t meet N.Y. State requirements) Robin was restless for something to do.

Gardiner was in the midst of a main street revitalization movement, and Robin saw an opportunity and began to dabble in real estate. She spotted an older building, and as she had done in Santa Cruz, she purchased it and began to improve the property and rent it out, while seeking other real estate ventures in the vicinity.

In addition, Robin discovered folks were interested in transforming the Hudson Valley town into a thriving small town with  charm and the kind of activities that attract visitors and investment. Makers and artists were beginning to develop Gardiner, and Robin joined in helping with marketing efforts on behalf of the town.

Of the makers whose path she crossed, Robin was fortunate to meet the folks behind Tuthilltown Spirits (recently acquired by William Grant and Sons).

She began working at Tuthilltown doing marketing and outreach. A colleague (and the daughter in law of the owner) became Robin’s friend.

The friend, Cathy Erenzo, besides working for Tuthilltown Spirits had a passion for fostering babies, and Robin, being a good friend, began helping her out with babysitting, spending time during the day with the babies and also having them stay overnight.

In fact, Robin grew to love her involvement with the babies so much  she was inspired to create a line of affordable, utilitarian baby clothes.

She approached her son, Samuel Hayes, thinking he might apply his creative skills to design a pattern for the infant and toddler clothes she envisioned the babies dressed in.

Samuel is an animator and a cartoonist with a love and lifelong fascination for drawing bugs and abstract, kinetic figures.

Turns out, Samuel’s skills and talent would prove to be a perfect fit for Robin’s vision, and together (and without a grand plan) they began to create adorable baby clothes intended for the children in her care.

Robin contacted a custom print service known as Spoonflower which makes on-demand prints. The seeds of the baby clothing line were underway, but not before daughter Eva and her crucial insights were folded into the mix.

Eva Hayes is all in.

While Robin was pursuing her passions in Gardiner, her daughter Eva Hayes was at Northeastern University studying marine biology and international affairs.

Time spent studying in Hong Kong enlightened Eva about the plethora of manufacturing and design hubs there.

When she visited home in Gardiner and spent time with her mom and the foster babies, Eva would see the reaction the baby clothes would get.

At some point inspired by the clothes and what she had seen in Hong Kong’s manufacturing and design hubs, Eva was moved to say: “Mom, we should make this a business.”

And so a business began to be hatched and the family began to bootstrap a textile business in the Hudson Valley,

Spoonflower, born in 2008, and based in South Carolina, enables a maker to design a print and select a fabric, which Spoonflower than prints creating material that can be fashioned into a garment. 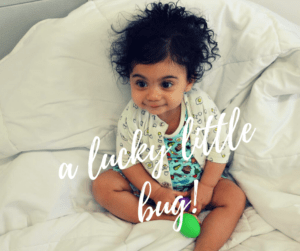 A baby in Lucky Bug clothes

All the while that Robin was pursuing her passions, her daughter Eva Hayes was at Northeastern University studying marine biology and international affairs.

Time spent studying in Hong Kong enlightened Eva about the plethora of manufacturing and design hubs there.

When she visited home in Gardiner, and spent time with her mom and the foster babies, Eva would see the reaction the baby clothes would get.

At some point inspired by the clothes and what she had seen in Hong Kong’s manufacturing and design hubs, Eva was inspired to say: “Mom, we should make this a business.”

And so a business began to be hatched.

A philosophy of ethically sourced fabrics and environmentally sensitive production

Because of Eva’s work in marine biology, care for the environment is paramount for her:

“Sustainable fashion is very interesting to me. I like companies like Everlane which emphasizes ethical sources, environmental responsibility, and a focus that seems to be much better than fast fashion.

“We saw that in the baby industry there was a void in the market for unique pieces, and so we embraced the notion that we would strive to ‘create the things you wish existed,’ and that were ethically sourced and environmentally sensitive .’” Eva explains.

Eva’s interest is on trend with a movement being popularized by millennials who seek: ” …transparency and responsibility from corporations…This increasing demand coupled with the recognition of their buying power will undoubtedly influence not only the luxury sector, but also many industries for the better in the future.” Gucci’s CEO François-Henri Pinault recently told the Huffington Post.

Samuel Hayes wants in, too.

Since he was little, Samuel Hayes had a fascination for drawing squiggly, crawly things and developed a kinetic quirky style, often drawings of bugs and critters.

It’s a style that is perfect for animation, which is what Samuel studied at the Massachusetts College of Art and Design.

Since graduating, Samuel has worked as an animator in Boston, Massachusetts; Oakland, California; and, now, in New York City, N.Y.

Having a side business with Eva and Robin aligned perfectly with Sam’s interest in animation. His clever squiggles translate well to both animation frames and pattern repeats on baby clothes.

With Samuel on board, the trio decided to name their clothing line Lucky Bug Clothing.

Although they are all busy with separate interests, the three prioritizes time with the family business, scheduling creative strategy meetings at inspiring Hudson Valley locations, such as Hudson, N.Y.

Together, Robin and Eva and Sam (as they call him)  brainstorm upcoming lines, with Samuel acts as lead designer. 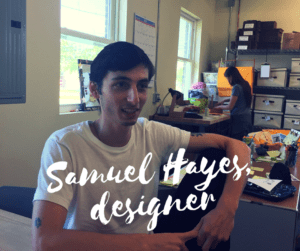 Onboarding the business: the steps to market

With a box of clothes saved from various fostered children, Robin headed to NYC to a sample maker to find out how long it would take to get her first line going, using the clothing as inspiration.

Step by step, she figured out how to get her business up and running:

She had lined up all the resources needed to begin production, but now what was needed was a place.

The Orange County Accelerator: A place to nurture a business 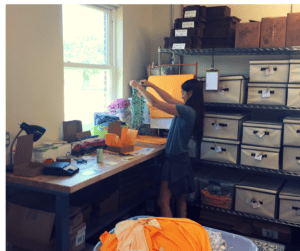 The Orange County Accelerator as explained, here, is a regional economic development incubator so designated by a division of the New York Empire State Development agency.

Such agencies help accelerate a business from startup to a stable, goal-oriented business experiencing growth. Just the sort of businesses the City of Newburgh needs for economic development.

Robin Hayes: “A couple of people told me all about The Accelerator, and I just called and Melanie (Melanie Schouten Program Director) answered. She put me in touch with Vinnie and Laurie (Vincent Cozzolino,  Managing Director and Laurie Villasuso, Chief Operating Officer).”

“I was introduced to the pattern making technology they offer onsite, TukaTech .”  she said. (Like much of the Accelerator’s capitalized production capability, TukaTech is funded by TSEC , learn more here).

“I explained to Laurie and Vinnie my belief there needs to be access to a quality digital textile printer, although they are costly, in order to grow textile manufacturing here, in the Hudson Valley.” Robin explained.

“Laurie and Vinnie encouraged me to look beyond what I was doing and pursue sourcing.” she continued.

“They introduced me to Unshattererd who used the Tuka Tech software while they were at The Accelerator, and who have now moved out and up into a full up production shop.”

“They encouraged me to think about producing right at the Accelerator. “I thought about it, talked to Eva and came back and said “yes!” she said happily. 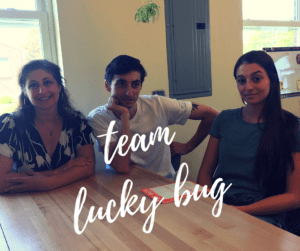 “We are building a sewing team with a grant for training provided by SUNY Orange, and we have just completed our first training course. Five women completed the training,” Robin explained.

“Recently, we also got funding from the WDI (Workforce Development Institute) allowing us to train a team for industrial embroidery as well as other related skills, and we will train 4-5 individuals in that piece of the industry, as well.”

“Our goal is to source and print fabric here and sew the fabric here,” Robin finished.

Right now, Lucky Bug is using a resource that Knickerbocker Manufacturing of Brooklyn fame uses, Johnny Designs, to cut and sew the articles of clothing.

Knickerbocker is world famous for crafting timeless, American made products in an old hat factory in Brooklyn.

Lucky Bug anticipates that sometime this year,  60 to 70% of the sewing will be done right here in the Hudson Valley at the Accelerator’s pods in New Windsor. 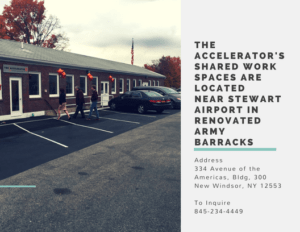 “Meeting the goals of sourcing, printing, and sewing our product here meets our mission goal of transparency.”

“We want our customers to buy with confidence, knowing that our product is ethically and sustainably sourced and done so primarily in the US.”

“By training and working with these seamstresses the work is guaranteed to be done here, in New Windsor,” Robin said. 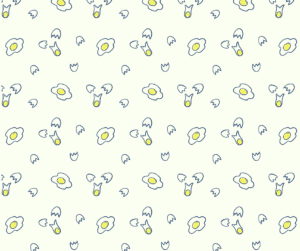 Who does The Accelerator work with?

Qualifying startups in the area of:

Because The Accelerator, funded by TSEC and other grantors, hopes that the startups they nurture will expand, hire, and move into bigger spaces, their efforts accrue as a positive for Newburgh‘s future.

Logically, these “graduates” will move up and out, and when they do, they will ultimately move into commercial real estate in cities like Newburgh.

Newburgh, N.Y.  is attractive to makers such as Lucky Bug given its tremendous stock of retail and commercial manufacturing space at extremely competitive prices. To learn more about The Accelerator, contact them here.

To learn more about Lucky Bug Clothing, and to order baby clothing from them, visit them here.