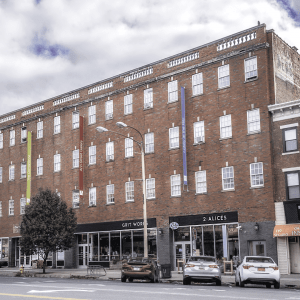 Broadway in Newburgh might one day be home to both CBD product retailers and CBD research and processing facilities, with product shipped from Newburgh piers

Historic Newburgh has been deeply connected to Orange County and the Hudson Valley region’s agricultural economy for more than two centuries.

Dating from the days when Newburgh son, Andrew Jackson Downing, American horticulturist, architect, and the first great landscape designer in the United States was remaking the American landscape, until now as a resurgent apple industry and rising CBD hemp farm industry reshape the Hudson Valley, Newburgh’s economy has had ties to agriculture.

Inheriting the nursery from his father at a young age, Downing as the Hudson Valley’s leading landscape designer, tamed an unruly pioneer landscape into manicured designs for the great estates along the Hudson.

While doing that, Downing also served as the editor of the magazine The Horticulturalist and with brother Charles Downing wrote the definitive book on pomology: The Fruits and Fruit Trees of America.

The book had a profound effect on agriculture and farming nationwide, as gentlemen farmers and professionals experimented by growing hundreds of varieties of fruit trees.

His influence is still seen in the Hudson Valley, where apple trees and fruit orchards dominate the landscape.

To this day, New York State leads the nation as the number two apple producer, and within the state, the Hudson Valley ranks with the Champlain Valley as top producers.

While Downing’s nursery and estate have vanished, and the days of wagons and trucks trundling down Broadway to load agricultural bounty and manufactured goods on departing ships are gone, regional farms are still very much tied to Newburgh, and in the future can be more so.

These farms have raised or cultivated a variety of farm goods and products in the Hudson Valley for centuries, surviving economic blips and adjusting to market forces, including residential development, and yet many remain.

According to HVADC, an agricultural incubator, New York State currently now has 108 processors and 480 growers with over 20,000 acres of registered hemp production. 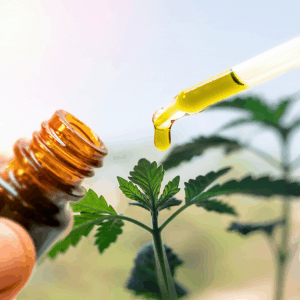 According to the Times Herald Record: “Orange County farmers are projected to grow one-third to one-half of the CBD hemp that will be harvested in the Hudson Valley this first year of explosive interest in the crop.

“Our preliminary surveys indicate there are 500 to 700 acres of hemp in Orange County of the 1,100 to 1,500 acres that have been planted in the Hudson Valley,″ said Maire Ullrich, agricultural program leader at Cornell Cooperative Extension Orange County. “And about 60 to 80 percent of that is in the Black Dirt.

Forbes magazine stated that by 2025, the CBD oil market could reach revenues of $16 billion dollars. “CBD is technically legal as a result of the Farm Bill that passed late last year…33 states and Washington, D.C. have legal medical markets while 10 states (plus D.C.) permit recreational use.” 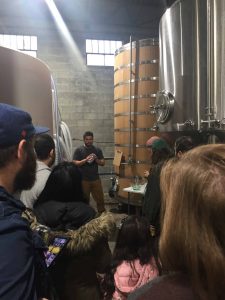 Minard Farms, a farm that has been in the same family for almost 100 years is in Ulster County. It specializes in cider production and processes and ships over a million gallons of cider annually.

It sells its products to farm stands, supermarkets, and also ships it overseas.

In The City of Newburgh, where hot new startup Graft Cider located a few years ago, the startup cans and ships their popular lines of hard cider.

At Graft, business is booming

If you guessed Minard’s is where Graft gets its processed base cider, which it then ferments and tweaks,  you’d be correct. At Graft, business is booming, and in turn, so is Minard’s.

“The ability to source cider from Hudson Valley apples for a Hudson Valley business has been a boon to three-year-old Graft Cidery in Newburgh.

“They’ve kept pace as we’ve scaled up, sending us a tanker every other week and more in our busy season, the warm months.″

(As of this writing, Graft Cider is moving to a new location in Newburgh, engaging in an aggressive build-out to meet demand and also cater to a public seeking an onsite tasting venue).

Besides Graft Cider, The Newburgh Brewing Company, no more than a startup like Graft just a few years ago,  is now a well established and nationally recognized Newburgh enterprise doing tremendous business at its renovated warehouse and also shipping a ton of product.

The Brewery emphasizes on its website that many of its beers use locally sourced agricultural products and points specifically and repeatedly to the benefits of being located near the region’s agricultural cluster. 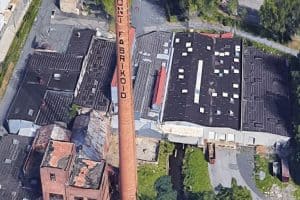 In order to meet the hoped-for demand for CBD products, Newburgh’s stock of commercial real estate might offer investors an affordable real estate solution so they can either start, locate, or grow their businesses here.

Graft Cider considered moving from Maryland to Newburgh and began looking at a real estate market that offered both exposure to the New York Metro market, as well as the Hudson Valley agricultural market.

They seized the opportunity to lease an affordable space in Newburgh.

Like Graft, CBD entrepreneurs will find a wide range of real estate options that can help the bottom line and also keep them near the New York Metro market as well as Hudson Valley agricultural hubs. 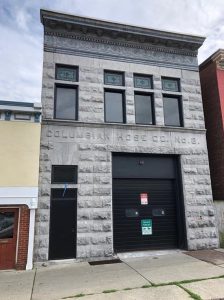 Historic buildings like this former firehouse at 255 Broadway (for sale) could be repurposed as a retail store.

From large warehouse properties to the mixed-use buildings found up and down Broadway, and in other parts of the city, Newburgh’s commercial real estate is especially attractive with low prices on the properties, lease prices are sometimes as low as $2.95 per square foot (nnn).

Many of these buildings are workhorse relics from Newburgh’s shipping and manufacturing past and have rear street loading docks and spacious first and second-floor interiors in addition to their storefronts.

Newburgh’s Broadway became a regional artery for the trading of goods to and from western Orange County and beyond and via its Hudson River riverfront to points north, south and across the Atlantic.

Today, Newburgh still enjoys a transportation edge with access to a transportation network that includes interstates 84 and 87, a north-south railway system, and Stewart international airport, only a few miles away.
While Newburgh’s harbor is more or less inactive except for some tourism activity and some shipping activity out of New Windsor just to the south, in fact, the Bay of Newburgh offers a deep modal port.

According to Steelways Holdings, a corporation which is located in Newburgh at 401 South Water Street, their facilities in Newburgh offers the following:

The main shipping channel runs adjacent to the main pier, and extends approximately 4000′ east, across the river.

Three (3) rail spurs terminate at the north end of the facility.

An additional nine (9) acres of the property is located directly across the street from the main facility and is used for parking and storage.

A 28,000 sq.ft. steel fabrication shop* with 3-10 ton overhead cranes (27′-0 under the hook) represents the epicenter of the steel fabricating operation. 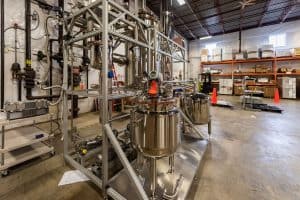 What’s also noteworthy about Newburgh’s proximity to an agricultural Hudson Valley is that the same valley shares space with a full suite of high-quality engineering companies that are able to produce the equipment and machinery the CBD industry may require.

In today’s parlance, these companies are called advanced manufacturers.

Once industrial hemp is harvested, the material needs to be processed.

As businesses, colleges and research centers do their work, they will all need to build out their facilities with the equipment that will allow them to work to scale.

Industrial-scale extractors and processors will need to be designed, engineered and manufactured.

Engineering an evaporator in the Hudson Valley

One of the most significant tasks in creating CBD oil at an industrial level is taking the raw industrial hemp (also known as biomass) and processing enough of it to get a sufficient amount of end product: the CBD oil.

To do that, a piece of equipment known as an evaporator is needed to take the CBD oil extract and process it.

Currently, China has been leading in the production of evaporators, but a local Hudson Valley manufacturer, Ceres Technologies, has entered into the fray.

Ceres is manufacturing slick-looking evaporators that process a mixture created by steeping the biomass in ethanol.

After it has “cooked” the mixture is loaded into an evaporator which passes it through tubing surrounded by a steam jacket.

The heat from the steam evaporates the ethanol, in turn creating a vapor stream, which is then pushed by centrifugal force into successive chambers ultimately entering a cooling chamber where the vapor returns to oil, now purified.

Just as apple production or any kind of farm production results in a growth in ancillary industrial demand, like sheet metal working, welding, engineering and design, soil testing, packaging, advertising and package design, not to mention research, the same potential holds true with the production, processing, and packaging of CBD oil.

Newburgh, as illustrated, is well-positioned to benefit from this new agricultural focus as it takes shape in these early days and, hopefully, impacts the city’s economic development.

Be sure to check out the CBD oil conference coming to Newburgh in December!