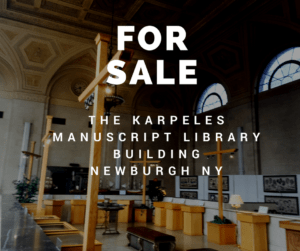 There is a beautiful and historic building, a former bank, located at 94 Broadway, in Newburgh and it’s for sale, which is the main point of this post: that an historic and stately building located in Newburgh’s East End Historic District is available for sale at the incredibly low price of $1,595,000.00 and change.

But, let’s take a look inside to find The  Karpeles Manuscript Library Museum.

Do you know anything about the 14 sister Karpeles Museums and their collections dotting different regions throughout the United States?

Each museum is housed in a similarly grand, classical-style building. A tremendous manuscript collection owned by philanthropist David Karpeles is cycled throughout these museums buildings (which he and his wife, Marsha own) on a rotating basis.

Dr. Karpeles, is a California-born mathematician, inventor, and real estate entrepreneur with significant personal wealth and, evidently, a penchant for rare manuscripts.

Since the 1970’s,  Karpeles has been on a mission to collect a treasure trove of historic items, including: 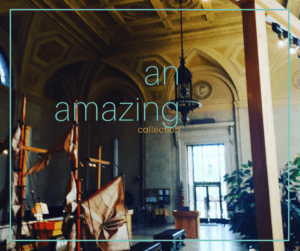 And this is a fraction of the collection of original manuscripts, items or artworks purchased and owned by the philanthropist.

He observed as his own children toured a museum that it wasn’t so much the great artworks that impressed them, instead they were drawn to writings, diaries, drafts and other items belonging to artists and scientists.

The children it seems reacted to the personal.

So Karpeles made it one of his life’s missions to stimulate an interest in learning, especially in children.

He and his philanthropist wife do this by providing as many students as possible with a close up look at the work or accomplishment of an individual, represented by hand-written notes, annotated manuscripts, diaries, and first drafts.

In Newburgh, many of the visitors to the library museum are local schoolchildren partaking in a class trip, and this is true at the Karpeles collections throughout the country.

The Manuscript Library  located at 94 Broadway occupies the former home of the historic Newburgh Savings Bank,  incorporated in 1852.

And, like the Manuscript Library, the Newburgh Savings Bank saw a great deal of history.

Shipping concerns, cotton mills, insurance companies, manufacturers-essentially, the businesses that built Newburgh, as well as working laborers (for whom savings and loans were first established, so that individuals and businesses would have access to capital) at the Newburgh Savings Bank.

In 1978, a month long celebration of 125 years of banking observed the history  of commerce by tracking one family’s account from the birth of a daughter, through the acquisition of a mortgage, to the financing of college, a wedding, and then finally the transfer of the estate.

At that time, the bank had assets north of $200,000,000, but by 1982 it (like many other small town and city banks) were merging: The Newburgh Savings Bank was bought by the Bank of Albany which in turn was acquired by an Ohio bank. The bank shut its doors sometime in the late 1990’s and Karpeles acquired and opened the Manuscript Library there in the early part of 2001.

Its amazing coffered ceiling is about 40 feet high and is decorated with plaster medallions of local landmarks, such as the Balmville Tree, as well as notable figures related to the Hudson River, such as explorer Henry Hudson.

Visit our individual property listing page where you can get lots of details, download a brochure or book a showing of this grand old beauty and you can either lease it back to Dr. Karpeles, or open your own imaginative business.

Or, hey, look what they did to the Brooklyn Trust Building, they turned that into luxury condos where just one condo starts at around $3,000,000!

On the other hand, maybe you just want to turn the bank into your own private domicile, that works too! That’s the ticket: income producing commercial space with a separate private residential living space.