What did you miss during Newburgh Last Saturdays Memorial Daw Weekend 2016? 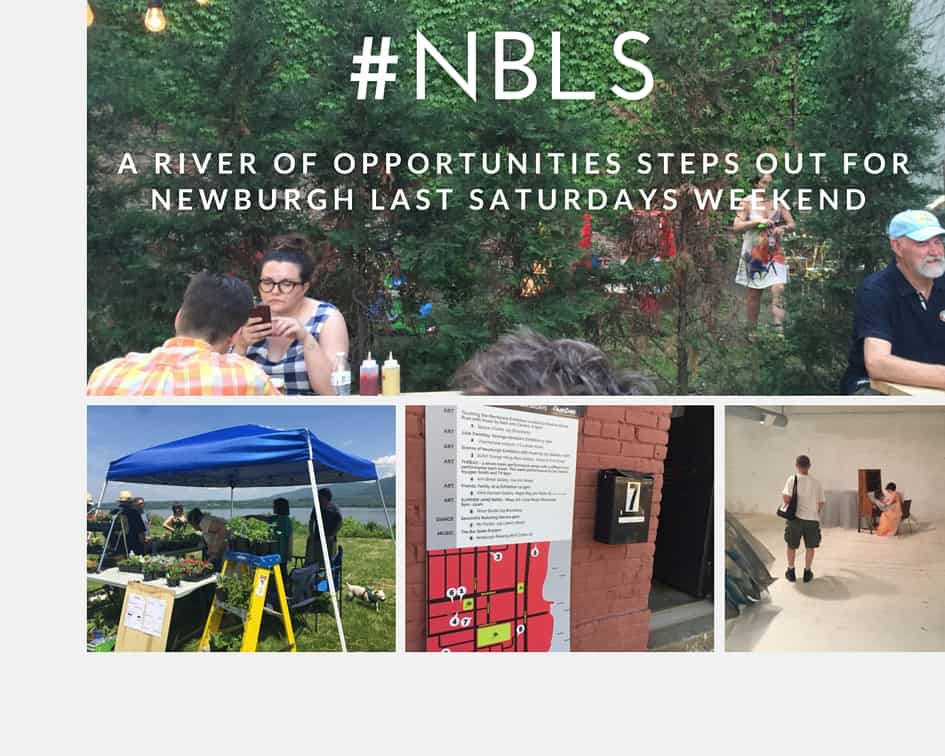 It really is an exciting time for Newburgh, N.Y. as signs suggesting a reinvigorated city surface on a daily, weekly, and monthly basis.

Among the green shoots is the tremendous number of artistic and experiential happenings which are available every weekend in Newburgh in galleries; coffee shops; loft spaces; on our college campuses; and on our streets!

And one of the greatest sources of information about what’s happening is Newburgh Last Saturdays (of course Newburgh Restoration has been an influencer in getting the word out about Newburgh, too).

Newburgh Last Saturdays is a community-based effort within  Newburgh N.Y. to highlight once a month  the many exciting events which will culminate on the (you guessed it) last Saturday of that month: you can find out more by typing: #nbls  on Facebook.

That hashtag delivers a feed of posts so you can decide what to put on your calendar for the last weekend of the month!

And that’s just what we did last Saturday. It was Newburgh Last Saturdays Memorial Day Weekend 2016, which was the last Saturday in May, of 2016 and the kickoff of summer.

While we couldn’t get to every event, and we were sorry that we couldn’t, we got to quite a few. What struck us as remarkable was the geniality of everyone we met and the diversity of people, the varying ethnicities, ages, interests.

But most importantly, there seems to be a shared sense of moment in the life and times of an historic and strategically important city that is loved: Newburgh, N.Y.

Let’s break down the day:

Well to be honest, we still had some final Memorial Day Gardening chores, so, that’s where we were, in the garden: 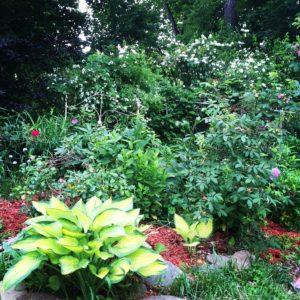 Up to Newburgh Art Supply to pick drop off a sponsorship form for the Newburgh Lightbulb Project ! At $100 bucks a pop  it’s an inexpensive but meaningful way to share and show your  love for the city of Newburgh and to support Gerardo Castro and Michael Gabor who have (not singlehandedly but sometimes it feels that way) helped turn the city into something of a burgeoning art mecca.

Up to the Newburgh Heights Associations Annual Flower sale. Deborah Dresser and her organization were busily selling all the choice annuals and some herbs and perennials which they had obtained from Devitts Nursery. 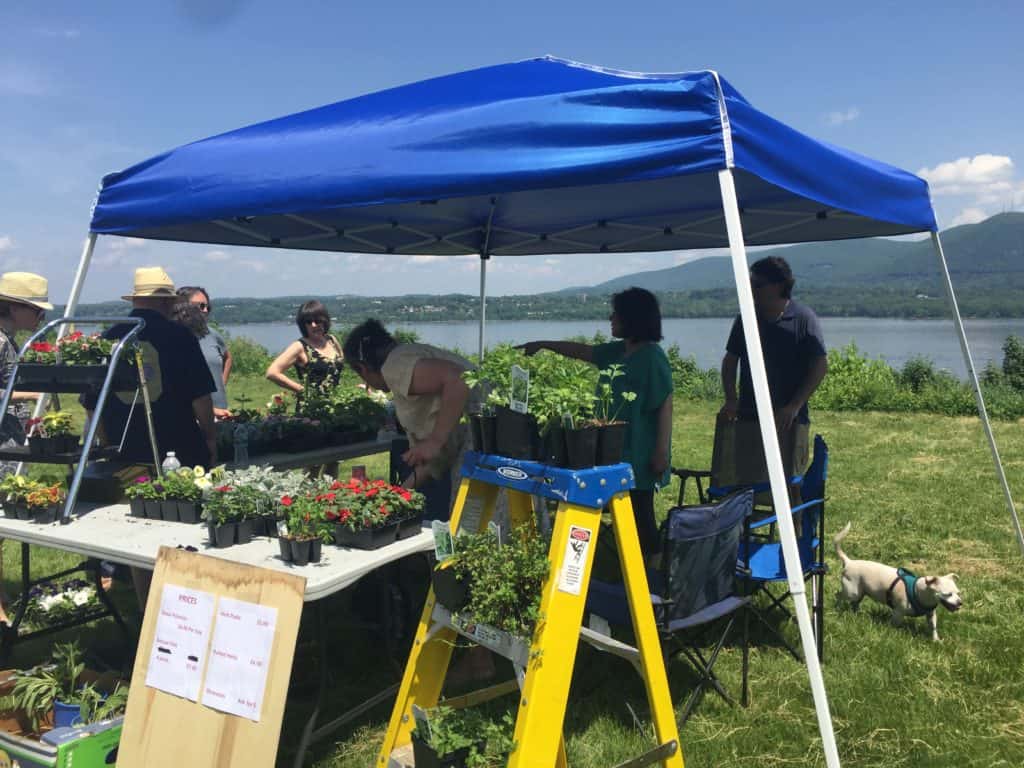 Naturally, since we can’t resist putting our hands in the soil at our humble cottage, we picked up some lovely coral colored impatiens to support the NHA.

The Newburgh Heights Association is all about improving their neck of the woods in Newburgh which, as the name suggests is located up in the bluffs section. 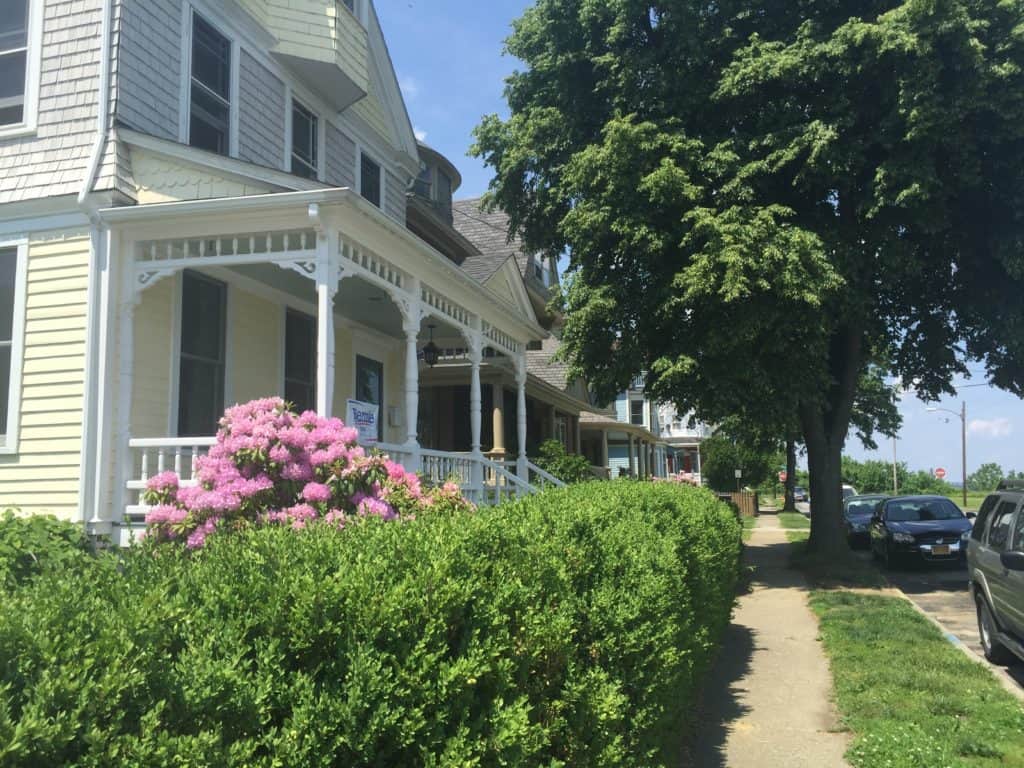 One of the many beautiful homes on historic Bayview Terrace opposite where the N.H.A. had their flower fundraiser.

We’ll be posting more news and updates about N.H.A.’s award from T.D. Green Street’s, T.D. Bank and Arbor Foundation Grant to support urban forestry. N.H.A. secured $20,000 with the help of the city of Newburgh, and the funds will go to beautification of Liberty Street. 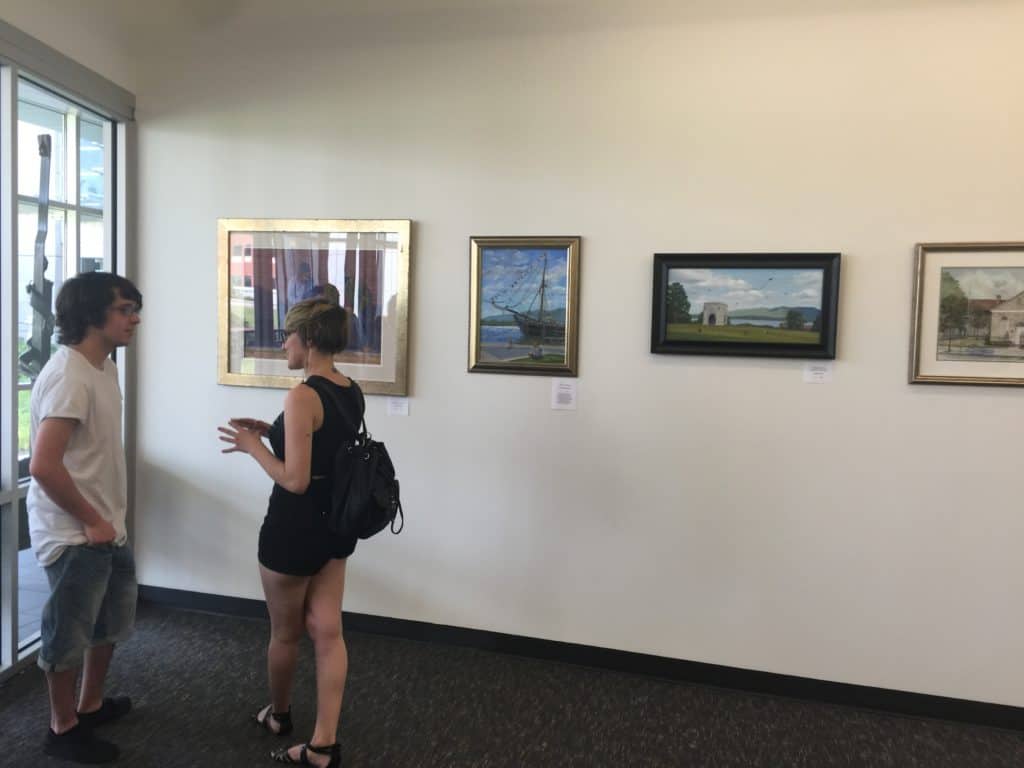 The exhibit at the Mindy Ross Gallery

Over to the Mindy Ross Gallery, in the Kaplan Center of the Newburgh Campus of Orange County Community College  for the reception and a walk through of the exhibit “Scenes of Newburgh” which runs through August 16th. Pen and ink drawings depict historical images of Newburgh from the early 1900’s and oils, acrylics, pastels and water colors offer contemporary views of Newburgh and her citizens. 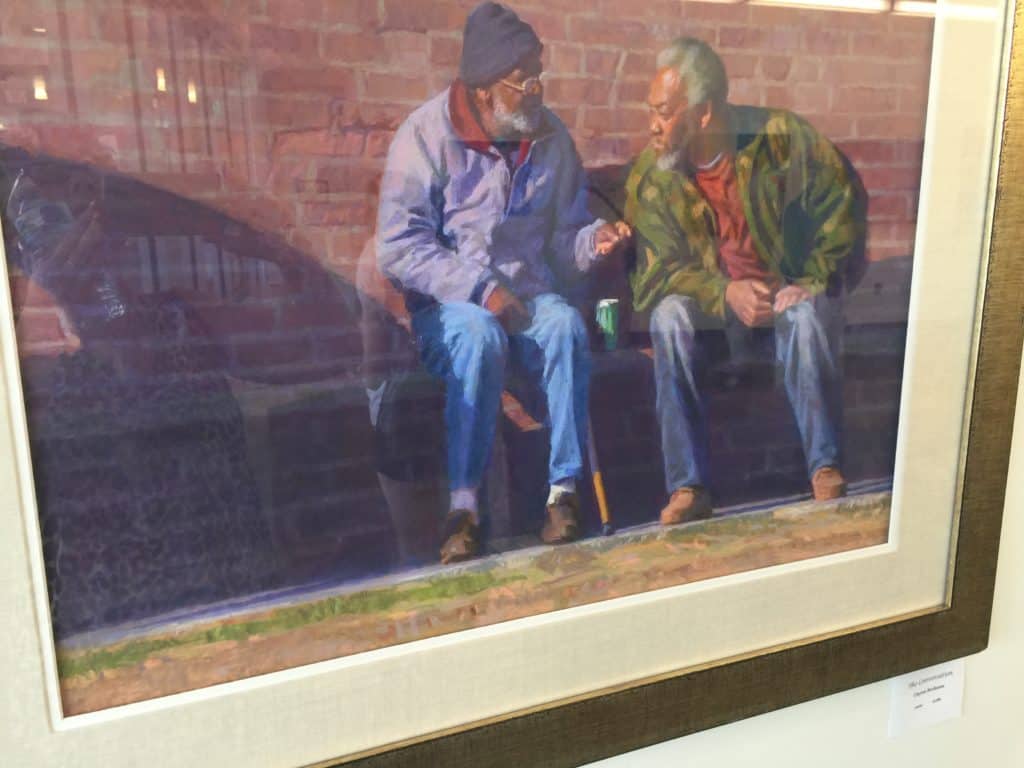 One of the original works on display

As the bright sunshine began to lose just a bit of force, we headed over to Thornwillow Institute, sadly missing some other wonderful shows, like those at Ann Street Gallery, Teran Studio, and Space Create and the Chris Davison Gallery at the Regal Bag Building, but we will be covering those spaces, places and events in future Newburgh Last Saturdays posts, to be sure. 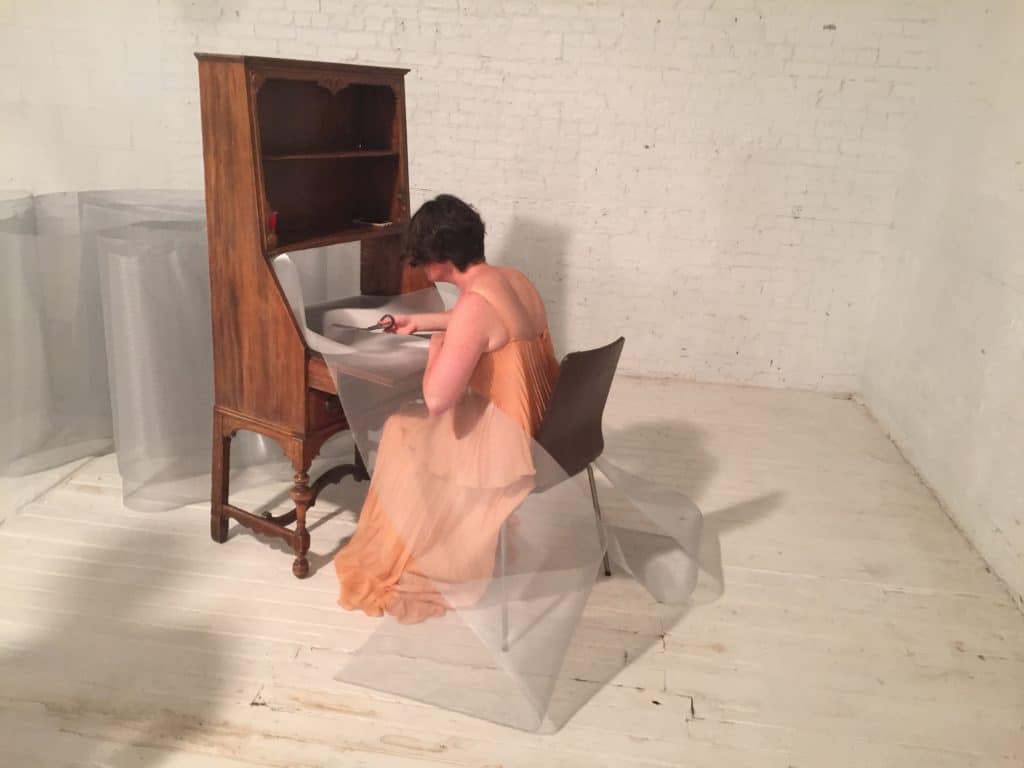 What greeted us at Thornwillow Institute, 7 S. Lander Street was the glorious exhibit by Newburgh artist, Julie Tremblay (recently arrived with her husband and daughter from Brooklyn, by way of Quebec.

We’re not sure if it was the time of day, the white painted space of the Thornwillow Institute, or Julie’s flowing, copper-colored, floor-length dress, but the ambience, mood, flavor and tone of the space was both ethereal and yet grounded by the work itself which is simultaneously cool, dense, fluid and changing. Like water.

One of the dramatic pieces at the Strongroom, Julie Tremblay show: Strange Attractions at Thorn willow Institute

The show, Julie Tremblay: Strange Attractions, runs from May 28 – June 19th, (yes, that’s right, one day after Newburgh Illuminated’s all day event) and you must hurry over to see it.

From the print piece accompanying the show, we learned that the show has been mounted by newly formed non profit: Strongroom. And a later chat with the show’s originator, Kelly Schroer, revealed more such shows will be a part of Newburgh’s art scene future.

And more from the print piece provided at the show: “Julie Tremblay’s work often takes scientific theories as a starting point, exploring he complicated relationships between the natural and  human worlds. Both research-based and instinctive, her monumental sculptures can take many forms. Twisting and flowing through space, suspended abobe eor around you, hard edges of an accordion fold meet a bulbous curve of sculpted aluminum mesh. LED lights at times strung throughout and spray paint applied to the metallic surface create added depth and false shadows, giving the form a mysterious sense of space, which feel at once transparent and perhaps impenetrable.”

Twilight was fast ascending when we arrived at Ms. Fairfax, the hip bistro which has taken up where Martha’s left off. On weekends, they offer summer weekend special events of one type or another, in this case: flame grilled barbecue hamburgers, because, well, it was Memorial Day Weekend!

We made our way through the dining room out to the back courtyard where twinkling lights lit our tables and dancing ivy crawled a federalist-style building wall.

Picnic tables are lined up for group dining, and who should seat herself next to us at our table, but the aforementioned artist, Julie Tremblay: she is as interesting and engaging as her artwork, and we hope to have more on her, as well, in future posts.

The food was delicious and after a few hours, we made our way inside. Decora Poet was the DJ and by ten the house was beginning to fill up. 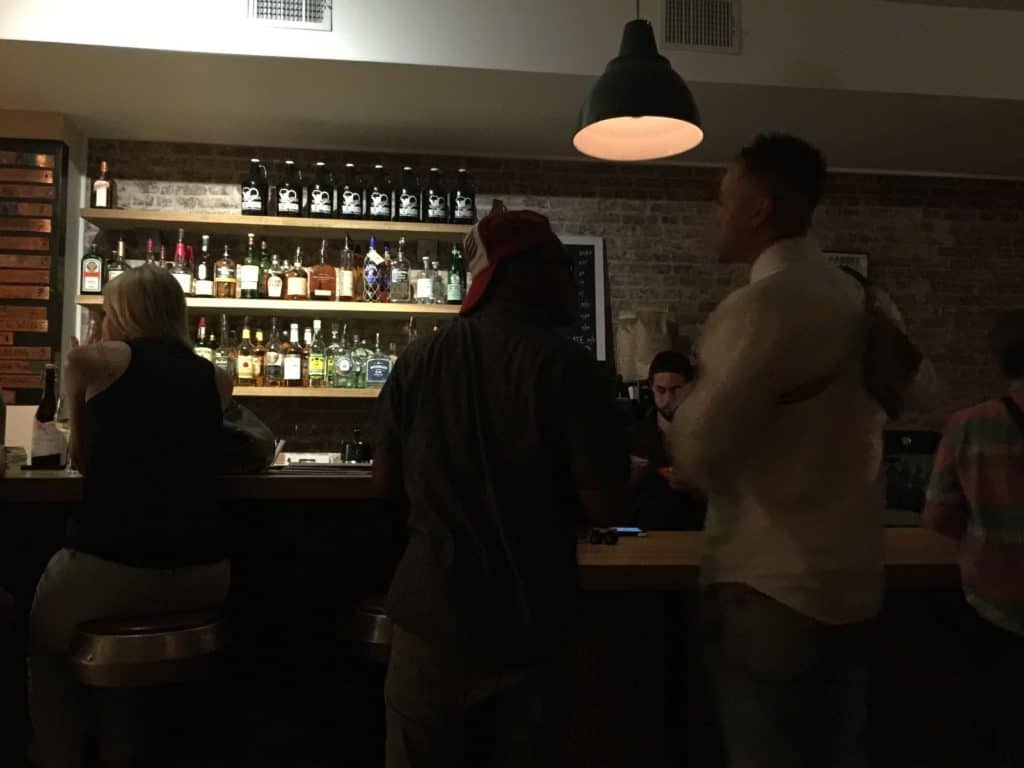 The bar at Ms. Fairfax

By midnight the sets were getting the bodies on the dance floor. We had to leave after midnight, but the night was still young: one stylist we spoke to  later that week, mentioned she was at Ms. Fairfax at 3:30 a.m. So, apparently, that is what is possible at age 23.

Are you gonna check out Newburgh Last Saturdays this June 25th?