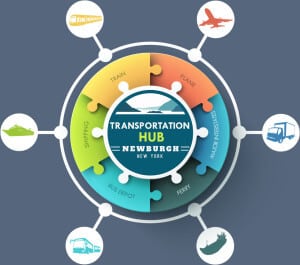 “Planes, trains, and automobiles” get you to and from  Newburgh, N.Y., to New York city and back again. Newburgh, a transportation hub sixty miles north of New York City, has a variety of ways to transport you or your things across the region and beyond.

See the links below for schedules:

Transit Orange  is a local commuter bus service available within Newburgh. It offers local bus services throughout the City and to neighboring communities including:

Other Local and Regional Bus Service:

The Newburgh Beacon Shuttle is an offering by Lepreuchaun Lines for commuter bus service in and between various stops in Newburgh. The route (southbound) originates at  Stewart Airport and loops through the city stopping at places like Grand St., Liberty and Broadway, and than heads west again stopping at the Route 17K stop and ride, before heading across the Bridge to Beacon and then for points south ultimately arriving at Grand Central.

This means this route is able to get you to Target, in Newburgh, as well as within walking distance to Aldi’s, and other destinations on upper Broadway, such as Adams, which is walkable from the 17K stop and ride, as well. Not ideal, but doable. Newburgh still needs short-run vans or mini buses to offer accessibility to the retail spaces and medical facilities available at the north end of town, but for now, this is one option as well as the Shortline Bus option detailed below.

Shortline Bus offers extensive service from its main terminal on Route 17 K as well as at three other points in Newburgh: Broadway and Robinson; Broadway and Lake Street;  and Stewart Airport. The service available is for local transportation and regional,  including Port Authority in Manhattan.

Stewart Airport Express: Shortline also offers the recently (winter 2017) Stewart Airport Express. Timed to coincide with the arrival and departure times of  Norwegian Air’s much heralded flights to and from destinations to Ireland, Scotland, and Norway, these shuttles are direct to New York City’s Port Authority Bus Terminal.

The Port of Authority of New York handles all ports, including airports and shipping ports, as well as bus terminals, so it can be a bit confusing when New Yorkers refer simultaneously to the Port Authority. In that case they are probably referring to: the Port Authority bus terminal  located in Midtownat 625 Eighth Avenue between 40th Street and 42nd Street, one block east of the Lincoln Tunnel and one block west of Times Square. New Yorkers refer to that area as the “West Side,” as well as “Hell’s Kitchen.”

In 2014, CSX with a rail line along the Hudson River,  invested nearly $149 million in its New York network. In addition, the company invested nearly $539 million in freight cars and other rolling assets to serve commercial customers through its rail system

Stewart Airport, 3 miles west of Newburgh, is the intersection of Interstates 87 and 84 and situated for efficient distribution of air cargo to and from areas in the northeast, mid-Atlantic region, and the Midwest. Leading markets such as Philadelphia, Baltimore, Washington, DC, Boston, Buffalo, Toronto, and Montreal are within 250 miles of the airport. Stewart is 60 miles from New York City and major shippers such as FedEx have a significant cargo shipping presence at Stewart.

Stewart Airport, 3 miles west of Newburgh, is a domestic  passenger travel hub offering originating and connecting flights to major and smaller airport destinations for both regional and connector flights for international destinations.

Newburgh is a deepwater intermodal port adjacent to the CSX commercial rail line. Of course, its shipping heyday is a thing of the past, but it still has capacity as a deepwater port, and in recent years various plans have been (er) floated to increase the port capacity, opening up tourist and other business opportunities.