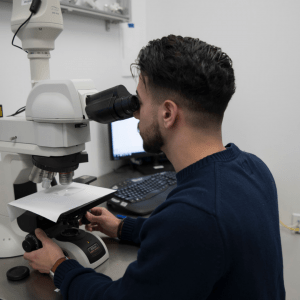 One bit of information that surprises is the fact that many manufacturing firms are active and growing their businesses in the Hudson Valley.

Moreover, these firms offer well-paying jobs that in recent times they struggle to fill.

With the help of the Newburgh nonprofit, The Council of Industry, these businesses are:

These businesses are also successfully lobbying state officials to keep the need for funding a trained workforce front and center in the legislative process.

All of this means there is a focus on programs that will create good-paying jobs along with training for residents of Newburgh and the entire Hudson Valley.

Council of Industry: Offering multifaceted support for over 100 years

A valley that once led with manufacturing

“Our mission is very simple at its core, says Executive Vice President Harold King of Newburgh and the Hudson Valley’s Council of Industry. “We’re here to help our members be successful.

The Council was founded in 1910 as the Mid-Hudson Manufacturers Association at a time when the Hudson Valley hummed with heavy industry and today’s tech products barely existed in the imaginations of sci-fi writers and enthusiasts.

IBM with its long arc of influence in the Hudson Valley dominated first in munitions manufacturing, moved on to accounting machines, and then in the 1960s eclipsed those machines.

IBM became famous for its development of computer technology and eventually mainframes and computer chips.

Each phase of IBM’s technological developments shaped the Hudson Valley.

Unfortunately, in the 1980s IBM refocused its business interests and moved from manufacturing to a heavier concentration in consulting.

Area manufacturing dramatically declined, many businesses failed. Those that managed to survive grew and morphed along with technological changes.

The Council which served and continues to serve those manufacturers has learned to remain mission-driven and nimble.

“A lot of it is about leveraging numbers,” says King. “Our core activities — advocacy, workforce development, networking — what we’re doing is leveraging small companies into one bigger ‘side’, and trying to speak with one voice for 120 Hudson Valley members who have common interests with thousands more across the state.”

With a paid staff of five and a 28 member board of volunteer directors, the not-for-profit serves members from Orange, Rockland and Westchester counties in the south to Columbia and Greene in the north.

The Desmond Estate at Mount St. Mary College in Newburgh where The Council of Industry operates

Located at The Desmond Campus at Mt. St. Mary College, The Council is involved in multiple activities designed to support its mission of workforce development and support of Hudson Valley manufacturers.

Its quarterly magazine, HV Mfg, highlights who members are and what they do.

Research data is compiled to keep members in the know about manufacturing trends.

Importantly, job listings are available for area workers to access and apply to. 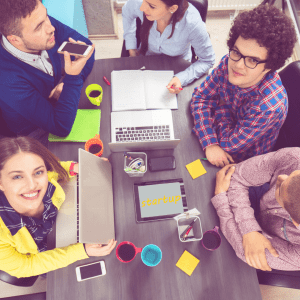 Right now, King says, manufacturers are in the novel position of needing fewer hands on deck than ever before while having a harder time than ever finding the right ones.

“We have fewer people working in manufacturing than ever before; the ones who are, are in more sophisticated roles with better compensation,” he says.

“Mostly, people are designing and fixing the hydraulics and pneumatics that perform what most people think of as assembly-line jobs.

“At the same time, we have a huge number of people retiring — machinists, toolmakers, a lot of mid-level employees — and we haven’t been replacing them.

“There are going to be a lot of opportunities opening up over the next 8-10 years, especially as U.S. manufacturing is becoming more competitive again as wages rise overseas.

“We’re really hoping we find a lot of people who are interested in learning skilled trades.“ 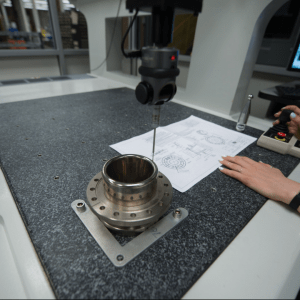 A young engineer works on a CMM machine (a coordinate measurement machine) at Fala Technologies, a Council of Industry member and an apprenticeship sponsoring company in the Hudson Valley

Spreading the news, educating in STEM

King and his colleagues are seeking solutions on a number of fronts at once.

From researching and serving as an information clearinghouse to lobbying government for policy changes, The Council is also collaborating with educators.

They hope to cultivate a crop of hands-on, STEM-inclined students who’ll step up and into well-paying manufacturing jobs.

Members are also encouraged to attend career fairs and spread the good word, but beyond these efforts, The Council promotes recruitment and training at every level.

Part of the cultivation of STEM trained talent happens right in Newburgh with the innovative P-TECH program.

Individual business members within The Council of Industry mentor and provide internship opportunities to P-TECH students.

Specifically, in Newburgh,  P-TECH is a joint effort of Newburgh Free Academy, SUNY Orange, and IBM, which collaborated with the state to create P-TECH as part of its corporate responsibility agenda.

The career program brings together the best elements of high school, college, and the professional world. It prepares students for jobs in computing and information technology. 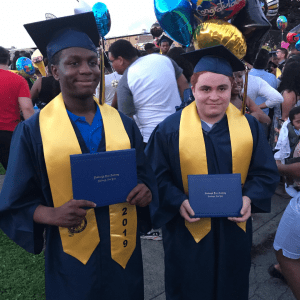 Anthony Grice is a third-generation Newburgh resident, an educator who just won election as City Councilman-at-Large, and he is a father of three.

Grice was a member of the first class of graduates at the Newburgh Campus of SUNY Orange, who has gone on to work with youth and serve many roles within the Newburgh Enlarged City School District.

Finding a future in a great job

When it came time for his oldest son, Anthony Grice, jr., to find a future, P-TECH was there.

“This young African-American scholar, who is on the autistic spectrum, went from a co-taught classroom to honors math and science, then to P-TECH — with teachers who are like a second family to him —  with a second-year paid internship at IBM, with an amazing supervisor.”

He has graduated from high school, and next year will graduate from SUNY Orange with an Applied Associates in Cyber Security,”

Grice told friends and followers on social media on graduation night. “To say we are proud is an understatement.”

The younger Grice gives the experience good marks as well.

“I first got interested in the program because of my father and my love of video games,” he says. “I wished to learn how to program them.

I learned programming, college preparation and public speaking, and the value of community, integrity, and teamwork. It is a bit closed off from other sections of the school, and there are challenges that come with intensive studying, but I found that it helped a lot of people find resolve and direction.”

And despite finding IBM a bit “tight collar” at times, he says it was a great place to work. “I loved most of my internship,” he says. “ A large part of that is due to the amazing coworkers; they all supported me through my journey. The expectations were fair and the bosses that I met were kind leaders.” 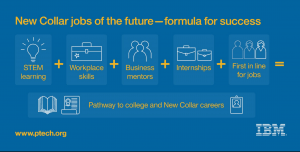 “As a parent, it was very exciting,” says the elder Grice.”Having worked on this grant as a school district employee, I knew how challenging this program would be, and I also knew there would be supports in place for students to be successful…

When I was a teenager the career options that are available now were not even thought of, let alone an opportunity to earn an Applied Associates in high school at no cost.”

While P-TECH is designed to grow a fresh new crop of tomorrow’s advanced manufacturing pros, The Council of Industries also offers training in everything from introductory-level hydraulics, and electronics to business communication and manufacturing leadership.

Through the Council’s facilitation efforts, county SUNY campuses can maintain a cornucopia of highly specialized course offerings that stand ready to be taught if the need arises.

Working with the state, The Council has taken over skilled trades apprenticeship and training programs and helps companies meet state training requirements from OSHA and other regulators.

“Many of our members are second-generation companies, which is pretty good,” says King modestly.

Guiding a business at a pivot point

In many a local success story, the Council has played a pivotal role at a critical moment. One Kingston manufacturer, in particular, credits them with saving his company. 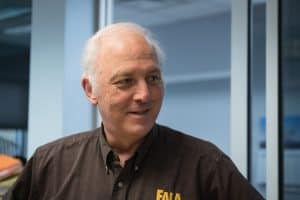 Dad was happy for us both; we’d made it to the big time! Then in the mid- 80s we both came back and joined Dad’s little shop of about 12-15 people.”

That lasted for three years and then the unthinkable happened. “Dad passed away suddenly in 1987, leaving us a couple of young guys with no idea how to run a sales office,” says Falatyn.

“We struggled hard and learned fast. IBM were good customers…Then, a few weeks after September 11, 2001, my brother passed away suddenly.

He’d been the people person, the outside sales. He’d just been elected to the board of The Council of Industry.”

Bereaved again, Falatyn knew he needed some training that he couldn’t get just anywhere.

“I’m the type, I really like to just stay at my desk working on tech,” he says. “I called Harold and asked if he’d mind if I took my brother’s spot.

I needed to learn marketing and communications and sales. So I joined and started putting in a lot of energy, meeting a lot of people, and it started to feel really good.”

Since then, he’s taken on a key role in building training and workforce development programs.

“We’ve been partnering with The Manufacturers Association of Central New York on workforce development for years, getting the state to work with us on apprenticeship programs, Falatyn says.”

“With the help of the New York State Department of Labor, we were able to launch the Manufacturers Intermediary Apprenticeship Program which allows associations like the Council of Industry to cut through the paperwork and make it easier for small manufacturing firms to implement a state-approved program.”

“Now we have a pathway for people: come in, start basic — although you’ll be making above minimum wage even there — and work your way up, show us what you can do. We’ve had four apprentices at FALA in the past two years.”