There’s a real estate boom in Newburgh. What’s driving it?

Exploring Newburgh’s neighborhoods is exciting at this time of year, particularly when street after street seem caught up in spring renovation fever. The warmer weather and gentler light puts a fresh face on people and places after the long winter.

Driving the city we’ve discovered the consistently busiest areas are those anchored by Liberty Street north of Broadway, Downing Park, Liberty Street headed up towards and up in The Heights, and the mixed-use corridors near or on Broadway. 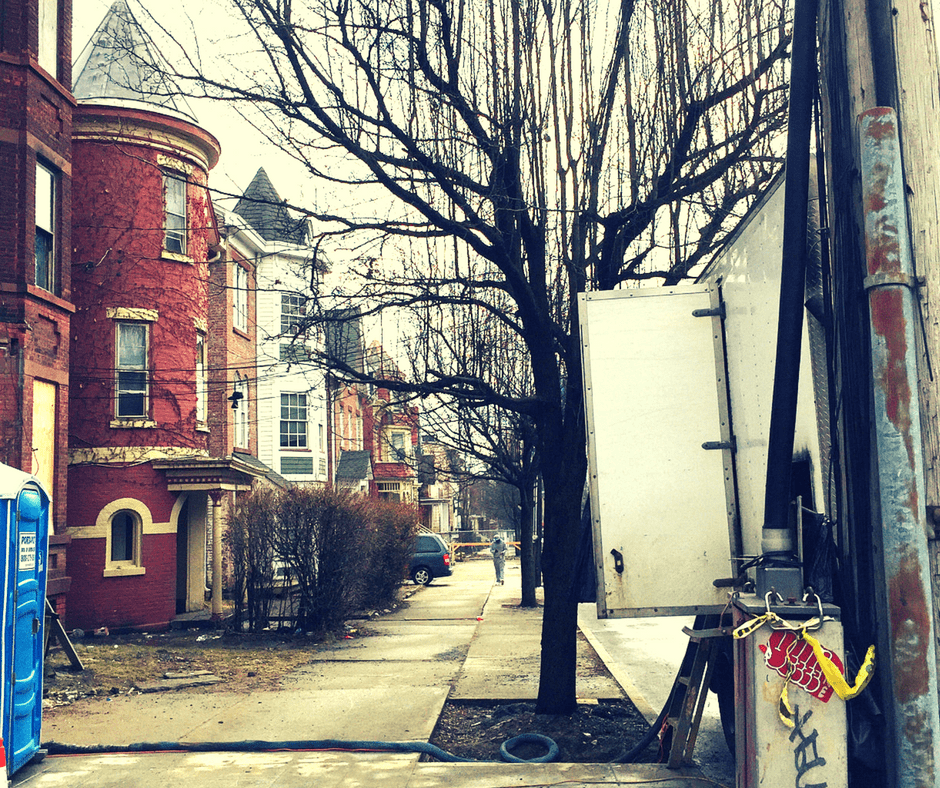 To a casual observer there appear to be three key drivers to recent real estate activity in Newburgh:

Three nonprofits dig into the heart of Newburgh.

Early this March we decided to see how work on properties is progressing, especially in the area near St. Luke’s hospital.

After parking, at the north end of Downing Park, we headed south down Dubois. Midway we hiked fifty feet up Downing Park’s eastern slope of Downing Park and took in an incredible view of rooftops framed by the Hudson Highland mountains in the distance.

Walking past St. Luke’s we noted multiple trucks running generators. They were pumping power into the abandoned buildings they were working on.

Trucks lined both sides of the street and carpenters, handymen, and project managers hurried about, coveralls white with dust or splattered with paint.

Saws, hammers and power tools clanged in an industrious cacophony blending ambulance sirens in a hurry  to the E.R. The noise quickly trailed off behind as we took a hard left at First Street and headed eastward towards the river.

In less than a minute we came to the corner of First and South Miller Street. Here we found a beautifully restored house, the product of the union between Rupco, The Land Bank, and Safe Harbors of the Hudson  we’d heard about.

The three nonprofits forged a collaboration, spearheaded by New York State Homes and Community Renewal,  www.nyshcr.org. It’s a state agency that works to create, preserve and improve affordable homes within communities like Newburgh.

The trio, working with the state as well as Sterling Bank, struck a deal to create a scatter-site development in the East End Historic District area north of Broadway. 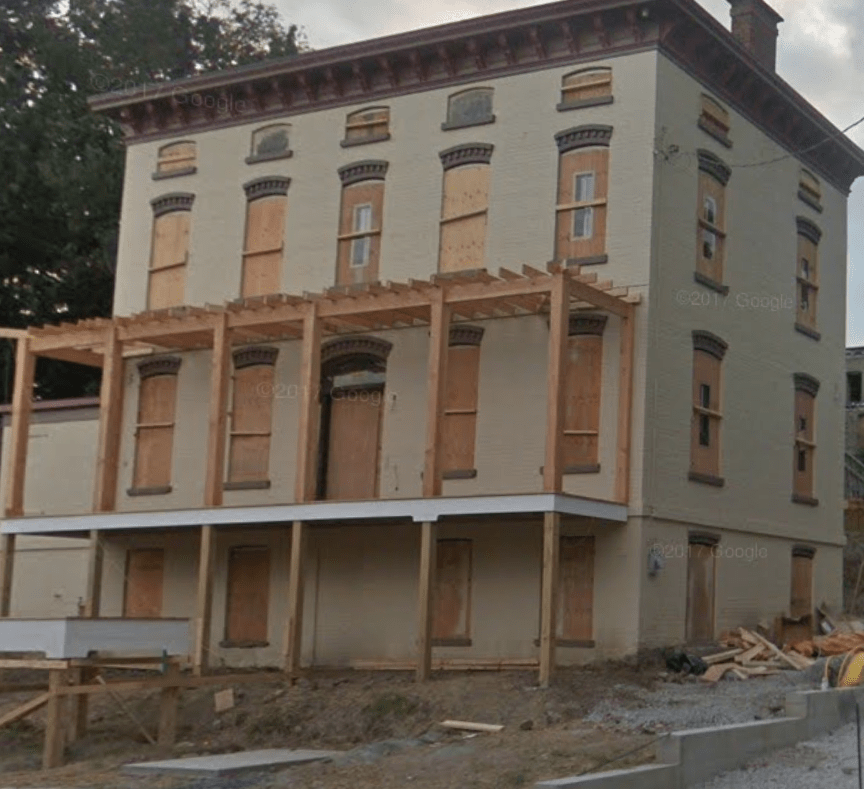 The beautifully restored building after renovation. An East End Historic District jewel, thanks to the revitalization effort let by: Rupco, The Newburgh Community Land Bank and Safe Harbors of The Hudson.

Plans for the area include a mix of studio, one, two and three bedroom apartments for income-eligible individuals and working families.

Homeless veterans and artists will receive preferential consideration amongst all applicants.

First, we must say that the grandeur and beauty of the historic architecture encountered is inspiring.

But as we continued our walk further down First Street and taking a sharp turn left and north up Johnston Street we could see there are buildings that are simply beyond repair and area neighborhoods that still require lots of work.

The benefit of anchoring the neighborhood, though, is clear.  By renewing the buildings on Lander, South Miller, Johnston and Dubois the nonprofits have secured at four points a considerable rectangle stretching between Broadway and First that already has created a stabilizing influence in this region of the city if only visually.

Primary and first-time home buyers are coming in

Janis is a longtime resident of the Hudson Valley who is located in Newburgh. She has seen her share of downturns caused by businesses and residents fleeing Newburgh.

Now, however, Janis sees a reversal of fortune:

“The City of Newburgh’s housing market has been making great strides in the last 12 months. As a real estate agent it has been frustrating: I have many buyers looking to relocate to the area with little inventory to sell to them.

“Many newbies are under the impression that when they decide to take the plunge they can make the move immediately. If only it was that easy!

“Buyers are amazed to find choices are few, and that Newburgh has become much more expensive than they expected.

“While the prices in Newburgh are greater than a year or two ago, there are still homes with great value that would sell for much higher prices in Rockland or Westchester. ” she said.

A Comprehensive Real Estate Market Analysis for the City of Newburgh, NY

An investor with an interest in Newburgh.

John Hickey is locally known for his investment business Newburgh Storefronts and Lots.  John has managed and invested in properties in New York City and Brooklyn. Now he has his sites set on Newburgh where he has begun assembling an investment portfolio of multi-family and commercial properties.

Q. John, when did you become interested in Newburgh?

A. I started coming to Newburgh right after the recession hit. I was looking at properties in the Heights and a few near Mt. St. Mary College. The time wasn’t right for me financially, but I stayed interested in the market.

From time to time I would pass through and look, but I never bought until last May. I got a few friends together and we bought two houses.  One was vacant the other rented. My partners were not that interested in Newburgh.

Q. What happened next, since you now own a number of properties.

A. I found a few more.  I came across a package of properties that were poorly maintained and with many issues.  One of the properties: 222 broadway is a rooming house.

I talked to some folks in the city about the building.  One called it: “ the worst building in the city, it has always been a problem for at least 20 years.”

One of John Hickey’s commercial properties on Broadway in Newburgh, N.Y.
Q. Didn’t this deter you from purchasing?
A. I was told this by a law enforcement officer, but he did say it could change. In fact, he offered some helpful suggestions:

I followed his suggestions and came up with some  others:

Q. How has all that worked out for you in terms of property management?
A. With the rules in place we have had some success getting good tenants after also seeing to some simple fixes:

Q. What’s the market look like now?
A. We’re still buying, but it’s obvious that prices have soared even since last spring. Right now we’re looking for multi-family, mixed-use, and commercial. But so is everyone else! Good for Newburgh.  It deserves it.
Q. What’s your long term play for Newburgh?
I came to Newburgh because I study and follow gentrification.  I bought out a slumlords package of buildings, but I didn’t come up here to be a slumlord.  In a few years, all my units will be renovated as tenants move in or out.
Q. What’s your advice for current residents of Newburgh?
A. Most of my tenants want better apartments.  I always warn them:  If you are renting in Newburgh and want to stay you had better buy.  These rents/house prices are going up in the next ten years. In my opinion, there is no greater transfer of wealth especially for low income individuals who purchase now and hold on for 10+ years or more.  No guarantees, but that’s my take.
John Hickey offers real estate meetups monthly at Blacc Vanilla in Newburgh, N.Y. To follow John and learn about his meetups visit his Instagram profile: @newburghlofts.

In summary, nonprofit investment in a large section of Newburgh’s East End Historic District, a pressured residential market in the tri-state area owing to high construction costs and a booming economy, and real estate investors taking advantage of market conditions seem to be working in concert in Newburgh to create a real estate boom!

DISCLAIMER: This article in no way constitutes investment advice nor recommendations. Real estate investing can be highly speculative and requires a great deal of research, professional advice from licensed realtors, as well as advice from attorneys and financial institutions familiar with real property investments.

A River of Opportunities offers insights for those interested in learning about Newburgh’s commercial real estate, and the makers and creative individuals choosing to live here.