By their account (and ours!) the event was tremendous and offered the visitors a chance to not only visit artists in situ discussing their works in galleries across the historic district and beyond (in Balmville, specifically a beautiful area in the Town of Newburgh), but also offered young artists a chance to participate in a great weekend of art. 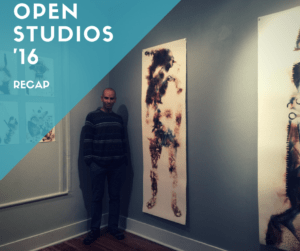 “We think the Open Studio tour is important because it’s necessary to include these artists who are just starting out. What a great way to get exposure!

”Some of the reactions and conversations that they have had have made them rethink their work, and quite a few of them have said ‘I never thought about hanging my work a certain way versus another,’ for instance. And so now they think about this after speaking with people who have commented.”

Artists Paulien Lethen and Marieken Cochius showed at Lethen’s gorgeous 118 First Street home, located on  Newburgh’s historic Quality Row. Both Lethen and Cochius are highly respected and collected artists. Lethen has made Newburgh her home, while still continuing her well known gallery the Holland Tunnel in The Williamsburg section of Brooklyn

Castro on how Open Studios comes together:

“I start making phone calls to the buildings’ owners and arrange for them to lend space.

“This year we had some who were on last year, but not this year’s and some new participants up in the heights.

“We had over 900 Open Studios maps printed up and only a hundred or so left by the end of the weekend. And, we had downloadable maps on the website, so people got them there as well.

“We are not interested in making each year “bigger,” bigger is not necessarily better. We want to offer a good experience. It’s all about the experience, about being in the moment.

The Open Studios 2016 Tour is important for Newburgh (as we see it) because it takes people through some areas they may not visit.

The Tour had 21 locations  listed on a map of, essentially, the Historic District, and people were able to travel all the way from the Heights across town, north, to Liberty street north of Broadway (should we call that NOBRO now?) and also west all the way up to Clark Street which is where some of the youngest artists displayed at Newburgh’s Artist Colony.

This is an excellent way for those new to Newburgh to walk the area and see what others have done, both in their gallery spaces and in the commercial spaces they occupy. It completely supports the goal of this website which is to raise awareness and the potential for development of both live-work, mixed-use, and commercial spaces, not to mention residential spaces.

Neither men seem to stop. Besides organizing the Open Studios tour, they also organize the Lightbulb Project and Art About Water, and run their art supply store.  In Gerardo’s case, he also teaches at the college level, traveling to Jersey City University a couple of times a week to do so, and he shows artwork, as well!

Open Studios Tours happen in September every year. Art About Water is a spring event, and The Lightbulb Project a summer event.

You can always learn more at Newburgh Art Supply. Hey, maybe you’ll decide to participate, too!

See you next year!