Our Newburgh: Why We Chose Newburgh 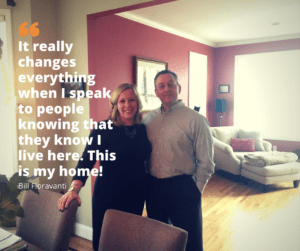 Just steps from the intersection of Montgomery and Broad Street in Newburgh on a pie shaped piece of land is a relatively new development (by Newburgh standards) of homes done with a nod to the Arts and Crafts style.

The homes were designed by architect Drew Kartiganer (a long time Newburgh loyalist) and built by Orange County builders, Rieger Homes, and they blend in nicely with the older homes that line Montgomery to the south.

A River of Opportunities stopped by to pay a visit to two of the residents in this section of Newburgh, Bill Fioravanti, Director of Business Attraction at The Orange County Partnership and his wife, Elizabeth Rowley, CEO Of the Orange County Community Foundation of Orange and Sullivan.

A commitment to Newburgh

Their home is perched on a small slope and has a beautiful view of the Hudson River just beyond. The Arts and Crafts details charm in a subtle way and tasteful contemporary furnishings lend a hip, urban quality.

There is a lovely arrangement of flowers on the table (A birthday present to Elizabeth from her co-workers), and Bill is finishing the requisite duties of host, offering coffee, a plate of fruit and such as we get down to conversation: we’re here to talk about his commitment to Newburgh, and to some extent his work at The Orange County Partnership, where he has a leadership role as Director of Business Attraction. 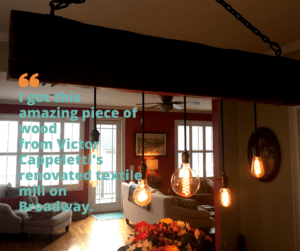 Being a stakeholder in Newburgh means Fioravanti truly is invested in this city which for so long has seemed perched, just like his home, on the edge of something great.

But now, greatness seems within reach.

“Some like-minded people want to come together to see Newburgh come back and revitalize, but in a way that benefits everybody,” he explains mindful of the role he plays in encouraging economic development, not just for Orange County, but for Newburgh, an important anchor in the county’s development.

Fioravanti is impressed with the stock of historic commercial real estate space available in Newburgh, not only for its affordability, but because these “iconic” historic properties in Newburgh have, as he puts it, “hand crafted details and amazing history.”

He notes the success with which Victor Cappelleti’s 639 Broadway building is renting out, and he sees examples of this kind of success as the kind of progress that will bring other, long term tenants who will not only stabilize Newburgh, but add to her growth and prosperity.

In fact, he was able to appropriate a fantastic piece of wood from Victor’s historic space which he fashioned into a unique, beautiful light fixture for his home.

Bill Fioravanti thinks being a resident makes him an involved kind of stakeholder:

“It really changes everything when I speak to people knowing that they know I live here! This is my home!” he said.

Fioravanti sees stabilization as key to Newburgh’s revitalization. He is impressed by Newburgh Prep, and believes that what is needed are more bridges to workforce development.

He wants to see under-represented communities prepared and equipped with 21st century, tech skills coupled with the soft skills of, as he says, “going to work, timeliness, and work place protocols where workers relate to their boss.”

He’s very enthused as he explains all this, but just at this point we are joined by his lovely wife, Elizabeth (friends know her as “Biz” a childhood moniker bestowed by her older sister, Lauren, who as a youngster struggled to pronounce Elizabeth. Her nickname is as delightful as she is!).

Elizabeth is also deeply enmeshed in the welfare of Orange County, working with philanthropists and nonprofits to secure and supply endowment monies from active, generous citizens to worthy local-area causes.

And Elizabeth is not only a stakeholder in Newburgh, just as Bill Fioravanti is. She is a native of the area with deep, historical roots here, and a dad who helped build a family business and who gave back to the community.

Her dad and his family owned Rowley Building Products, a building construction and distribution company.

Mr. Richard Rowley is still active in Orange County, and has long been a philanthropist in the Hudson Valley, instituting the Rowley Birthing Center at the former Horton Hospital (now Orange Regional Medical Center).

In fact, Elizabeth, who is expecting, plans to have her baby there!

Elizabeth is excited as she tells me this, quietly but proudly expressing her daughterly pride in her family’s heritage and legacy in the Hudson Valley, especially as it concerns her dad! 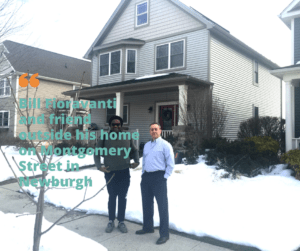 As Elizabeth gathers her things to leave, Bill resumes his point, that he sees social enterprises as being key in facilitating these bridges and looks to organizations like recap.org as prime examples of this.

“Fresh Start Café which is here as well as in Middletown is just that kind of place. According to their website, they were established as part RECAP’s welfare to work initiative.  They are a job readiness program designed to help individuals gain skills and confidence in order that they might succeed in the job market, and this is exactly what we need more of,”  he says, with emphasis.

Next, Bill turns his attention to Newburgh Illuminated. He is very involved in this yearly event which is one of the Hudson Valley’s most well attended cultural events.

It was started in order to recognize Thomas Edison’s role in lighting the first city to be lit (Newburgh) and in taking a chance on Newburgh.

Why we chose Newburgh

Now, Newburgh Illuminated is growing like mad with a roster of 25 bands planned to perform for this year, and dance companies, and artists, and a tremendous number of vendors. It reached nearly 10,000 attendees last year.

For this year, given the publicity, and the momentum from prior years, the consensus is it should do even better.

Bill Fioravanti, is the fundraising chair, and he says:

“Newburgh Illuminated attracted us and gave us a sense of the community.

We wanted to invest in THAT community, personally and in terms of where we bought a home, and that’s why we chose Newburgh.

Newburgh, I guess you could say, has become personal for us!”