Panic At The Disco With Stranger Things star Noah Schnapp 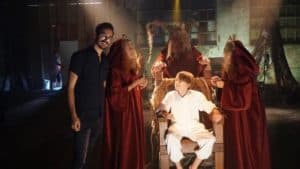 Noah Schnapp of Stranger Things on set in Newburgh, N.Y. for the shoot of Panic At The Disco’s LA Devotee

When video producer Rachel Diamond, of Platform 12, a Hudson Valley film production company, was scouting a location for her upcoming shoot with Panic at the Disco with Stranger Things’ star Noah Schnapp (aka Will Byers) for the band’s song, LA Devotee, she reached out to A River of Opportunities  for a Newburgh, N.Y. location.

A River of Opportunities in turn put her in touch with Victor Cappeletti, of the Newburgh Commercial Development Corporation.

Readers may remember the remarkable transformation occurring at Cappeletti’s 639 Broadway property, and that is what he showed Diamond, but she was looking for a grittier property and so he offered her one of his other properties in Newburgh.

If you’ve been following the latest tv trends, you’ll know that Stranger Things is the hit Netflix television show which first aired this summer (2016) only to become instant cult classic!

Diamond loved the opportunity of working in Newburgh, and as a result of this shoot, is shooting a promotional video for Cappelletti this spring at 639 Broadway featuring the building, at Peter Malone’s (Campaign Director of A River of Opportunity) suggestion.

According to their press release, “Platform12, a production company based in Poughkeepsie, NY, has quietly been making its mark on Hudson Valley film production since its inception in early 2016.

“In just a few months, Rachel Diamond, the founder of the company, and her partner, Massoumeh Emami, of Kingston, NY, have produced content for brands like Pedigree, Delta, Visa, Starbucks, and the American Heart Association, and they have worked with the likes of Queen Latifah, Novak Djokovic, Fall Out Boy, and others.”

“…Their latest project was produced in Newburgh, NY, for Atlantic Records.

“For Diamond, the decision to base her film production company in the Hudson Valley was personal, but also practical. “We have to shoot in New York City fairly often, which is fine, but it’s always so much easier to shoot Upstate.

For more about filming locally: http://www.hudsonvalleyfilmcommission.org

For more information about the filming location, Newburgh, NY contact us: https://www.newburghny.org