Placemaking in Newburgh with Lots of Ideas

August 15th kicks off the first in a series of placemaking events intended to transform vacant City of Newburgh lots.

Overseen by Columbia University’s GSAPP program’s Hudson Valley Initiative (HVI) which is a research consortium focused on projects located in the Hudson Valley, the placemaking event hopes to strengthen partnerships within Newburgh while exploring Newburgh and the region more broadly in the context of urban design.

GSAPP has worked in Newburgh previously building relationships and conceptualizing placemaking projects that have reimagined Newburgh and spurred conversations.

This particular project is being spearheaded by HVI director  Kaja Kühl , a professor at Columbia’s GSAPP.

Idea boards developed in Newburgh for a vacant city lot

She and her colleagues hope that the spaces which may be developed as a result will offer the citizens of Newburgh beauty, utility, and community.

The first meeting will act as a workshop and is scheduled to be held at the 191 South Street Community Park from 5-7 pm.

Titled “Lots of Ideas Newburgh,” the kickoff meeting will encourage attendees to come up with ideas about ways to imaginatively use vacant lots as public spaces.

As participants suggest and agree upon ways to use the spaces they will also suggest methods to implement the successful construction of the spaces. 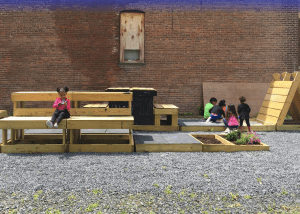 Transformed City of Newburgh Lot on South Street is now a public park. The Hudson Valley Initiative (a Columbia GSAPP Program) helped guide the community in transforming the vacant lot.

These strategies and tactics will result in the creation of a set of tools captured in a theoretical “toolbox” which in turn will inform future iterations of the concept until a number of improved spaces are deployed throughout the city to the benefit of city residents.

Some of the questions that will be asked of attendees (all are welcome) include:

Professor Kuhl will prompt participants by also addressing the value of addressing vacant lots and how an improved lot can impact a neighborhood.

She will also share a map of vacant properties in Newburgh and will present an overview of studies and research examining other placemaking initiatives where this has successfully been done.

Ultimately, as a few of these meetings are conducted, HVI hopes to show residents how the process can work for them so they can, ultimately pursue adopting a lot for a specific purpose. 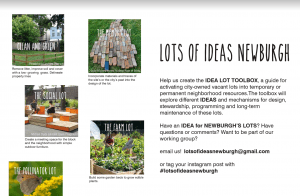 Flyer for the Hudson Valley Initiative’s Lots of Ideas.

The workshops (there will be two more: a September follow up to the August kickoff, and an October recap wherein the “toolbox” document will be shared for review with all participants) will attempt to give more detailed information and assistance for groups who would like to adopt a lot, offering information on:

HVI works with non-profit organizations, community groups, and local municipalities to advance the communities’ goals and at the same time also enhance GSAPP students’ educational experience through real-world collaborations, both in the classroom through studios and seminars and beyond the classroom through applied research and design projects.

This project is a collaboration between HVI,  Scenic Hudson and the City of Newburgh as part of the city’s comprehensive Open Space Plan.