Since this article’s publication a lot has happened in Newburgh, some very positive things have developed, and some harsh realities have dawned.

For one, in late 2019, the city experienced a budget crisis, and difficult and uncomfortable choices had to be made.

As a result, some members of the police force mentioned in this article, were let go in order for the city to meet its budget obligations.

The city has suffered as a result, tensions exist and and patience is strained.

But in the midst of all this, new businesses continue to open, commercial real estate and developments continue in Newburgh on Liberty Street.

The Liberty Street School was awarded a sizable grant from New York’s Empire State Development, and the building just across from the Liberty Street school has undergone a beautiful facelift. Many other positive developments in the area were covered in our recent story, here.

The four policemen round a corner onto Liberty Street after climbing hilly Renwick Street. They make their way towards Broadway.

Opposite from where they’re walking, the old Liberty Street School stands.

It’s barricaded from the sidewalk, encircled by metal perimeter fencing.

As they walk, they pass a renovated building. It features a new storefront and its windowpanes are sparkling.

The redone storefront is an outlier of an economic rebirth happening at the other end of Liberty.

The renaissance is inching its way southward, down Liberty, one of many important areas in Newburgh’s huge East End Historic District.

As the men walk, they chat and joke; their eyes move constantly. They’re headed back to police headquarters.

I’ve exited my car and approached Lieutenant Joe Cortez (he is in charge of special projects) who stops.

It’s a good optic for Newburgh, this foot patrol, and a picture is shared on Instagram.

He extends an invitation to swing by headquarters the next day to learn more about the unit.

The following day, security cleared, I take the elevator to meet the lieutenant.

Cortez sits in an office facing the river. He’s surrounded by paperwork, and on his computer is a Bonsai Tree screensaver.

It turns out, he is a master gardener.

The serenity the screensaver suggests is at odds with the daily stress police work brings Lieutenant Cortez.

Now in his 18th year of service, Cortez explains he is in charge of the new foot patrol team encountered the day before.

An end to zero-tolerance

According to Lieutenant Cortez, a nationwide shift in policing has been underway.

Instead of approaching entire neighborhoods and communities with an us- vs-versus-them, zero-tolerance mentality seen as needlessly hostile, The City of Newburgh’s Police Department is taking a strategic approach.

“We used to call them gangs, but in the progressive direction that law enforcement is moving toward as a whole, now we call them groups.”

“It came about to address group violence, more specifically gun violence,” he said.

In the past law enforcement operated on a zero-tolerance approach toward a whole community.

A new strategy called focused deterrence was developed from a theory put forth by a John Jay College of Criminal Justice Professor, Dr. David Kennedy.

Dr. David Kennedy’s research calls for a refocus on the smaller group within the larger community that is usually responsible for causing most of the chaos.

It’s the Pareto principle applied to law enforcement. Basically, this principle maintains that 80% of the effects come from 20% of causes.

Focused deterrence, Kennedy maintains, along with an intervention whereby a small community gathers with the targeted group to offer insights, warnings, and access to social services (such as job training) works.

Kennedy’s theories have been adopted by the National Network of Safe Communities.

Lieutenant Cortez points out, “We are not the only city that has done this, it’s actually a national drive.

Other jurisdictions may have a different name, but the basic premise is it deals with gun violence directly. It’s called Operation Ceasefire.”

He continued: “Now what we do is our group concentrates on groups, and within those groups, we concentrate on the individuals who are the most violent.

When dealing with those groups it IS zero tolerance. So, anything they do, we are on them; we want to stop that violence from happening, and not only are we on them, we are transparent about why we are there.

For instance, today we had just spoken with a young man on the street, and we told him: ‘We know what you are doing out here. We know what group you are affiliated with, and we are letting you know we are going to be out here on a consistent basis.‘However, we would rather see you safe, alive, and out of prison.

So, we are offering you services.’”

Cortez added, “We have the ability to offer a reentry program called Exodus Transitional Community.

Exodus is a service agency located at the corner of First and Grand Street; it’s an umbrella organization.

They can direct people who request help for jobs, training, monetary help—it’s not just help for them, it’s help for people affiliated with them, family members, partners.

If people tell us, ‘this is why I’m doing this,’ well, let’s take that away. Let’s see what we can do to correct this.” 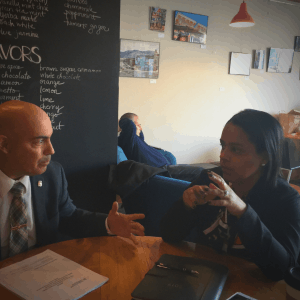 Lieutenant Cortez explains that an intervention is set up by Ms. Isabel Rojas of the District Attorney’s office.

The intervention will bring together parolees and those on probation with a variety of individuals, including the police,  representatives from social services, DA office representatives, and more.

Rojas is a former New York City police officer and she runs the intervention. She is the Group Violence Intervention (GVI) program’s project manager.

This means she is more or less the middleman between the social service agencies, the District Attorney’s office, the Police Department and the parolee or individual who is on probation who has been targeted for the intervention, which in Newburgh’s case is called a “Call In.”

Rojas’s role doesn’t stop there, though. She makes sure that the social services who have promised help are following through with that promise.

She closes the loop between all the parties involved, keeping them accountable.

Cortez points out her background as a former NYPD officer makes her able to work effectively with the department.

The Community Progressive Response Team was hatched over a year ago when the Newburgh’s Chief of Police, Doug Solomon, was hired, filling a long-vacant position in the city’s police department.

Solomon had led Monticello’s and Beacon’s police departments prior to coming to Newburgh.

One of the first things Chief Solomon hoped to accomplish was putting a foot patrol out on the street.

This unit is the culmination of a vision that he has worked on since arriving.

The officers in the unit were chosen because of their ability to connect with the community but also because they are comfortable and knowledgeable about evidence-based policing.

Evidence-based policing is a philosophy that holds that not only should officers have the right equipment, defensive tactics, and training, but they should also have access to high-quality information about what strategies and tactics demonstrably are working best out in the field.

They gain this by looking at field information and analyzing it for what is and isn’t working.

The new chief made this the standard for his department.

Officer Cortez explains, “This way, we’re not spinning our wheels. We don’t have a lag time of trying to learn something. This is what’s working, this is what we’re applying, and this is the outcome of it.

“We usually take an hour or so at each shift to go over new things that are going on in reference to groups, and it’s working: this is where we want to address a certain issue in our hot spot.”

The proof is in the results

Concepts like the Community Progressive Response Team do not come to fruition without the overall vision of a chief like Solomon.

Chief Solomon has had years of experience, having been a police officer with specialized units as well as a police chief.

He has an understanding of both sides: the field work and the administrative and managerial process.

His officers appreciate his insights and credit him for his mentoring.

They see him as being successful in running interference and overcoming roadblocks so that the concepts the entire team comes up with get put into action.

Some of the programs Chief Solomon has helped foster are the Youth Police Initiative and Cadet Academy, programs that seek to build realtionships with younger people in Newburgh’s community. These programs operate through the Newburgh School System and The Newburgh Armory.