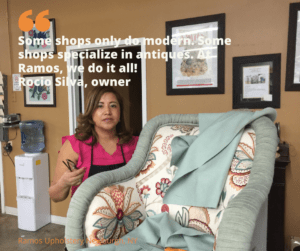 Ramos Upholstery on Little Britain Road in Newburgh, N.Y., is humming with activity as we talk with owner, Rocio Silva.

Rocio is a vivacious young woman with a subdued but friendly authority. She is clearly in charge of the entire shop where her staff works quietly.

In fact, each worker has an air of confidence which says, “I have a job to do, I know what it is, and I am about my business doing it.” 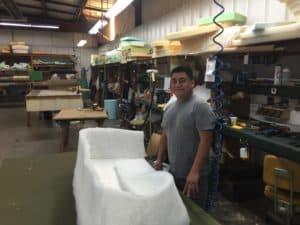 Marcelino is one of  the master craftsmen upholsterers at Ramos Upholstery

There is total focus on the task at hand.

A glance to the back of the warehouse space shows men at work on various pieces of furniture in individual work bays. 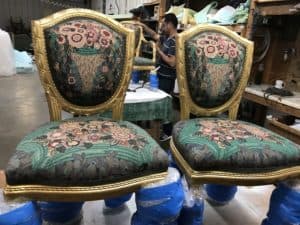 And in the front of the house, women busily wrestle different sizes and pieces of fabric from the stacked bolts of fabric on shelving overhead.

The seamstresses, guiding the machines, skillfully form the fabric into cushion covers and trim.

Their work is eventually passed off to the men in the back who fashion new life into old couches and chairs.

Trained by a master upholsterer

The entire concert is orchestrated under the watchful eye of Rocio, who still maintains contact with her good friends, the Ramos family, owners of the business which Rocio took over.  Mr. Ramos, at the time of this writing, had recently passed.

Rocio explains her training under Ramos:

“Mr. Ramos started at the Newburgh upholstered furniture store called ” State of Newburgh.’ He worked there for 15 years. Mr. Ramos was a master craftsman with years of training.”

“When they closed (bankruptcy) he opened his own business at his home on Broadway and was eventually able to move here (to the Little Britain Rd. location),” she said. 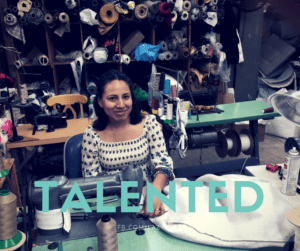 Rocio is training Izamar – whom she calls extremely talented – to take over, freeing Rocio so she can continue to grow her business

Mr. Ramos worked at the State of Newburgh for decades, and as they built their manufacturing business with numerous lines of couches and upholstered furniture he became expertly trained in many styles of upholstery.

The now-defunct company originally specialized in the slim upholstered furniture silhouettes of the 1950’s and early ‘60’s which we know now as mid-century modern.

Eventually, the manufacturer became well-known for popularizing the silhouettes of French and English traditional design, using the fabrics associated with those styles.

These designs rode a wave of popularity in the late sixties up through Laura Ashley’s heyday of English-style fabrics and furniture which were the rage in the ’80s and ’90s.

Tufted or tailored, State of Newburgh couches were fashioned using age-old upholstery techniques, and Mr. Ramos was well versed in them.

Today, Rocio has established an apprenticeship program of sorts at her studio, following the training she received from Ramos. 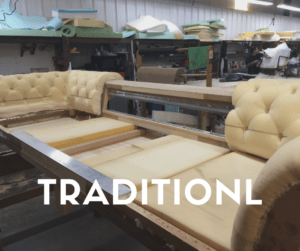 “When someone starts off in our shop, they begin by learning how to cut cushions, they are taught how to strip a piece of furniture down, something simple like a dining chair.

“Little by little the worker begins to work on a chair, a sofa, and eventually a couch. 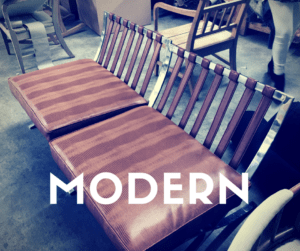 “Angel (her brother in law) has been here for twenty years. He’s a master. He can work on anything and he works on complete custom designs for our theater and Broadway customers as well as top designers.

“Marcelino has been here for ten years. He can fashion sandwich cushions and works with feathers and foam with equal skill,” Silva notes.

A younger man, Edgar, also highly skilled is the baby of the bunch with seven years of training under his belt. 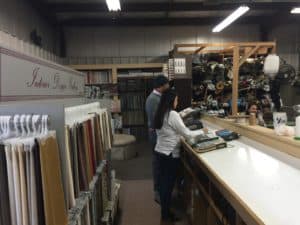 Kimberly, Rocio’s niece, works at the front of the house with customers

Over at the seamstress division, Rocio introduces me to Izamar, a serene looking young woman who appears to be strikingly contented as she sits by her machine.

“I’ve been training Izamar, for three years,” Rocio says, “She’ll take over for me!”
“And what will you do?”

Go out and get bigger accounts to grow the business! she replies, or words to that effect.

Rocio is a woman proud of her employees and her business, and she has ambitions for her business.
She’s proud that It’s a family business, too. Niece Kimberly, an NFA grad, works the front office dealing with customers and is developing an aptitude for color. 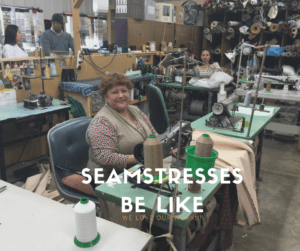 And Rocio’s mother, Claudia,  is also a seamstress at Ramos – she’ s been with Rocio for five years. Prior to working with Rocio, she worked fashioning suitcase at a manufacturer in New Windsor.

Well before that, Claudia owned a sewing factory in Mexico, so, as they say, the apple does not fall far from the tree, as Rocio has inherited both business acumen and talent from her mom.

As we walk to Rocio’s office to chat further, we pass by framed issues of Architectural Digest and Elle Décor, featuring some of Rocio’s work:

“I had a client who was a photo-spread, art director. She came into my shop to get some work done for her home. When she saw the magazine covers, she said ‘That’s my shoot!’ because the magazine featured a job she had art-directed using furniture we had worked on!” says Rocio.

Rocio Silva is clearly pleased by what her hard work has accomplished, and she is proud that her word of mouth business now includes private customers, Broadway Theaters, such as the Roundabout and Lincoln Center, local theater set companies like Centerline Studios, and area restaurants and businesses, such as Blu Pointe Restaurant, on the waterfront in Newburgh.

She’s friends with the guys we featured previously, Murmuration, INC., who also do concept and set-design, type work. They work with high end clientele in Manhattan, Las Vegas, and elsewhere, including Dos Equis and other brands.

Rocio mentions them and says, “I have worked with them on projects, they are great guys and do absolutely amazing work!”

And she is thrilled to see so many artisans and craftspeople coming into Newburgh, many of whom she also works with.

Most importantly she is proud of her family, her husband who helps her with the books, and her children. She has a son interested in fashion and a daughter, both are in high school at NFA (Newburgh Free Academy), and she has every confidence in their futures.

We end our visit with this inspiring observation from Rocio:

“If I as an immigrant can achieve what I have by learning a trade, and building a business, I know that my children see this.

“I know they see how hard we work. This hard work helps them visualize what they can be!

That they will own their own businesses,” she says.

As we said, the apples don’t fall very far from the tree, so we’ll be expecting more family businesses from this crew in the future, and hope that they land in Newburgh!