Once disrupted, Newburgh is reviving in the digital age

Now, in early 2018 Rich Fracasse, a businessman and entrepreneur, and his business colleague, Amal Ishak, sense better days are ahead for Newburgh.

Rich owns a successful HVAC business and has for over 20 years, United Air Conditioning, Refrigeration, Plumbing, and Heating.

It’s located at 299 Washington Street, in the city of Newburgh servicing a variety of sectors.  Rich counts as clients name brand retailers, hospitals and chain stores, across the Hudson Valley, all the way to the Capital District.

He owns the building at 299 Washington Street as well.

A time to invest

Lately, Rich has  become an investor in other Newburgh properties. He feels very strongly about the strength of the commercial real estate market.

One such property is 101 Liberty Street, Newburgh, N.Y., owned by Rich and currently inhabited by Rich’s friend and business colleague, Amal Ishak, owner of the very successful women’s boutique, Cream.

Amal and Rich are redefining retail with this amazing ground floor space which Rich has beautifully renovated, and Amal has tastefully decorated.

Seizing Digital by the tail

It is a perfect staging site for Amal’s walk-in business, but more importantly she is winning with a wildly successful business she has built online on Instagram.

Amal has over 4000 followers who keep up with her beautifully modeled (she’s the model) on-trend fashions that she goes to market and hand-picks. Each day,  she posts well-shot stills and videos showing details of the merchandise she proffers.

Since she is tall and lithe, she’s a natural at the kinds of selfies millions of social media users take. Lucky for her customers,  she can offer them a sense of what would be hot for an upcoming event or holiday by simply modeling her latest buys.

Because of the trust factor built by hundreds of daily applauses (likes) Amal’s account continues to grow, and the fashions she hawks gain ever wider audiences.

She ships, offering her customers the merchandise fancy boutiques in Westchester and Bergen County, N.J. offer. Because her overhead is below half of what you’d expect to pay in those markets, she sells for far less to her appreciative audience. 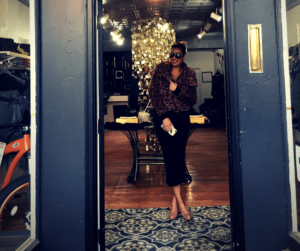 Amal Ishak models in the doorway of her beautiful shop at 101 Broadway Newburgh, N.Y. Walk-in customers come to buy Amal’s wares and she sells online as well.

Retail space in Newburgh, including Rich’s, is a steal by comparison to other markets, and this allows Amal to create and market her sensational online shop surrounded by an in-store, chic ambiance  as a backdrop. It is similar to that found in any quality Soho boutique.

And, because Amal is near market to New York’s showrooms, she can get to the city and personally handle and review quick to market fashions, selecting, by instinct and judgement, what she thinks will sell.

Now that retailers are being forced out of  New York owing to high prices (Bleecker Street is experiencing record vacancy) it makes sense for digital savvy retailers like Amal to head to affordable properties owned by people like Rich.

This portends a future commercial real estate uptrend not being discussed in the major financial papers: cheap, smaller-market, urban retail square footage, proximate to NYC, but at a fraction of the cost.

The right properties and cities (like Newburgh!)  possessing architectural charm and  close enough to New York’s brain center to tap into the vibe there are sure to benefit. 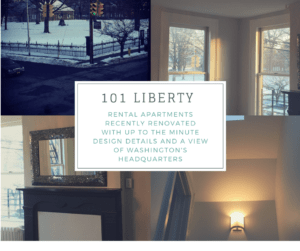 Above Cream, Rich is putting the finishing touches on several floors of rental apartments, all beautifully finished with up to the minute decorator-details, charm for days and views of the park and Washington’s Headquarters. Oh, did we already mention? These apartments are right on Liberty Street in the middle of all the excitement this part of town is experiencing in this moment. 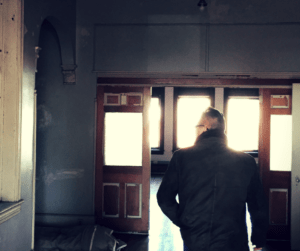 Lastly, over at 255 Broadway, Rich is finalizing a deal to purchase a beautiful old engine company, a firehouse with architectural charm galore which he may turn into a museum or a retail space. He has to see what he thinks the market will bear.

Newburgh is definitely open for business, and people like Rich and Amal see that and are in for the long haul. They recognize opportunity, and are leading the way, seizing on the reality that cheap, affordable commercial real estate is a key to business growth.

Rich Fracasse stands in front of street art created for him by his artist friend Will Teran. The image is of Geroge Washington playing a stratocaster-type guitar. Part homage to Rich, a musician, and part homage to General Washington, whose headquarters are caddy corner to Rich’s building at 101 Liberty Street and Washington, Newburgh, N.Y.

Besides running his business, Rich is a musician performing with a popular local band, he was a founding member of The Funk Junkies with whom he still performs at cornerstone events like Newburgh Illuminated, which Rich works closely with.

The group is busy all year, and finds time to do benefit gigs for causes like The Major General Irene Trowell-Harris Chapter of Tuskegee Airmen Inc, which raises scholarship funds for deserving youth in the Hudson Valley. Their (Tuskegee’s) next fundraiser is this February 3rd, at Anthony’s Pier Nine.