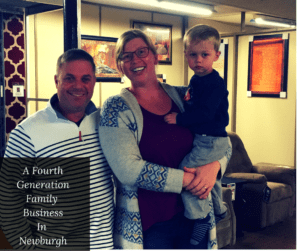 Shapiro’s furniture barn in business in Newburgh for four generations!

When you wander in through the front door of Shapiro’s Furniture Barn and make your way to the back you’ll likely find a smiling, youthful looking Noah Shapiro.

He’s busy: engaged in conversation with his customers, and somehow it feels more like you just walked into a cheery family room of friends.

You’re easily drawn in and suddenly a part of this conversation, too.

Leaning against a counter, there’s Mr. Cortez, a life long customer. He just stopped in for his morning cup of joe – a daily ritual – and now he’s joined in the conversation, too.

As banter continues you get a sense of why this store is a legacy in Newburgh. It’s still thriving after nearly one hundred years of retail service right on 71-75 Chambers Street.

Noah seems to know customers by name, and if he can’t answer your question because he’s busy, store manager William Santana steps in to answer questions in either English or Spanish. Santana is bilingual and also completely knowledgeable about the store’s inventory. 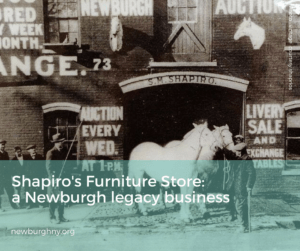 “We won’t ever forget our beginnings back in 1894, when my great grandparents, Sam and Sarah Shapiro, bought the building from Harry Rosenberg. The difference was that the place was not selling furniture back then.

Harry Rosenberg sold horses, as well as everything to outfit one from buggies, wagons, whips, horse collars, blankets and halters.”

Confirmation of this is found on the wall directly behind where Noah is perched: there is a store receipt from one Mr. Naughton dated 1921, it reads:

The Newburgh Armory had a cavalry in those days, and Stroock’s horsehair blanket business was booming, as the felt manufacturer profited from a growing agricultural center in the midwest and south that needed the fabrics, Stroock’s became famous for.

The Shapiro’s at that time had an auction House and jobbing Operation which capitalized on the nation’s need for transportation by sending one of the brothers west to Oklahoma where livestock was purchased and shipped east for sale.

In fact, the Shapiro’s in that day was the biggest horse auction house in the state of NY.

But many things, especially the arrival of the automobile, changed the economic landscape of the day, and the horse trading business went south.

With four sons to raise, Sarah and Sam Shapiro needed to make a decision, and quickly.

While horses weren’t in demand, Newburgh still continued to attract families because of its manufacturing.

Sarah reasoned that the young families  coming to Newburgh would need furniture.

In fact, Dupont’s Fabrikoid plant in Newburgh a manufacturer of a simulated leather popularly used by automobiles manufacturers was  a harbinger of the rising automobile age, and as the auto industry grew, so did their ancillary business.

The Fabrikoid plant attracted families to Newburgh and those families were in need of housing and furniture.

Sarah Shapiro proved to be prescient, and the main building was spruced up with a 30,000 square foot showroom ready to service customers.

In the beginning, the Shapiro’s first began by refinishing used furniture in a secluded work space, separate from the main of the building.

By 1937, name brand appliances were being offered.

A new Generation of Shapiros

By 1956 the business Sarah and Sam Shapiro had refashioned was now co-owned by the next generation, the 4 sons of Sam and Sarah:

Seymour was the oldest: if living, he would be 95 today; Jerome would be 93; Lawrence, would be 89
and Ronny, the surviving youngest brother is retired and living in Florida at age 85.

Life in the suburbs

A post world-war two USA saw families buying homes and leveraging up (and out) of cities into the suburbs.

The city of Newburgh experienced this shift as well with families leaving the city into surrounding bedroom communities experiencing explosive growth.

Fortunes for the furniture store once again shifted, and it experienced tremendous growth as it remained popular with families moving into their new homes in the surrounding bedroom communities. 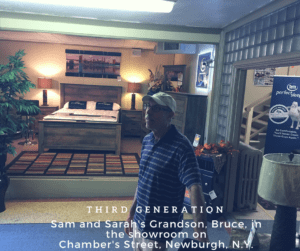 Fast forward to the 1970’s and grandson Bruce Shapiro entered a training program at Macy’s learning buying, operations, merchandising, inventory and accounting. At this point in time his father, Jerome, known as Jerry “the silver fox”, was running Shapiro’s Furniture Store.

At the same time Jerry was continuing the legacy of Shapiros, his wife, and Bruce’s mother, Joan Shapiro, held the position of mayor of Newburgh from 1980 to 1988. She was well-known for her dedication to Newburgh and her spunkiness,  never holding back on her opinions or beliefs.

Bruce Shapiro was enjoying a career which ultimately took him to Directional Showroom in New York City, however his father was growing  frail.

At that point great grandson Noah came on board to take the reins (so to speak) of the company.

Noah and his charming wife, Angela (an accomplished chef de cuisine, but now a busy mother of a toddler and manager of the business), are fully invested in Shapiro’s Furniture Barn. (Shapiro’s like another legacy business we covered, Ramos Upholstery, is extremely family centered!).

“Because we own our building, we are able to offer a lower price point. And, this helps us be true to our slogan: ‘a little out of the way, a lot less to pay!’

“We are proud to be in the community of the City of Newburgh, and we try to make it a better place in a way that serves our soul!

“We are encouraged by all the gains being made the Newburgh Community Land Bank and by Habitat of Greater Newburgh.

“My mother in law, Barbara Shapiro, has volunteered at Nora Cronin School for years and will continue to do so.

“And we are here because of our deep roots and love of Newburgh!,” she adds, with emphasis.

Their line of top brands include, Ashley, Serta, Vaugn-Basset, artwork by Artlennium, and dozens of other lines, and a quick check of a Google results for the store reveals under the store’s citation many enthusiastic reviews from the families and neighbors who have relied on Shapiro’s for a century!

Many thanks to Richard Rabinowitz, founder
Digital Photo Academy for his assistance with content for this article, based on his involvement with a recent photo essay show honoring longstanding Newburgh businesses held at Safe Harbors.
Teamnewburgh