Signs and Small Interventions in Newburgh

King Street Signs and Department of Small Interventions Partner up

Driving up Water Street alongside the Newburgh Bay, you know without asking that you’re someplace very special. Since last November, travelers on the road have a splendid reminder of exactly which special place it is.

The project began when a couple of residents with some skin in the game of the City of Newburgh saw a photo of an unassuming concrete retaining wall on a local blog and realized it offered a possible solution to something both had been puzzling over: Why were there no “Welcome to Newburgh” signs at any of the several gateways to the city?

“Pat (Nunnari) and I had spoken about that,” Naomi Hersson-Ringskog says. “Almost every city you drive into has a welcome sign, why not Newburgh? A welcome sign doesn’t just identify a place, it announces it. It says hello. It conveys a sense of place. ”

Hersson-Ringskog is an urban planner and designer who co-founded No Longer Empty in New York City in 2009 and turned her attention upstate in 2016, founding the Department of Small Interventions  (DoSI) in Newburgh.

Pat Nunnari, a Newburgh native and founder of King Street Sign Company, is the creator of much of the signage seen on the Liberty Street business corridor.

And when the two started to bring their idea into focus, the pieces turned out to fall neatly into place.

“We saw an opportunity for a small grant from the Orange County Citizens Foundation. We were thrilled to get their support. Then we needed to get permission from Central Hudson since they own the wall.

Luckily they were open to the idea and excited to take that underutilized site, which honestly was not great looking, and happy to leverage a public/private partnership to announce Newburgh in a fresh, exciting way.”

Support also came from 2 Alices Coffee Lounge, Atlas Studios, ColorCube Printing, Newburgh Brewing Co, and Society of Lash., some of the small businesses that have recently contributed to a downtown resurgence.

Nunnari, an NFA grad who worked in TV design in Los Angeles for a time before coming home five years ago to find Atlas Studios up and running and deciding to stick around, says painting the sign was a labor of love and a lot of fun. “It took a couple of weeks because we started in mid-October, so there were a couple of delays for cold or rain,” he says. “Then, as the word “city” started taking shape and people realized what I was up to, people started honking at me and yelling ‘Nice work!’ and flashing thumbs up. People were excited, and that kept me going.”

Nunnari was born at St. Luke’s Hospital and lived on Fullerton Avenue as a small child. NFA, he says, gave him a great start as an artist. “The Arts Academy was absolutely great,” he says. “I was very happy to be studying there.” Graduating in 2002, he went away to Coastal Carolina University, got his MFA at Marywood University in Scranton, PA, and headed to the West Coast.

When he returned to Newburgh five years ago, he didn’t necessarily plan to stay. Then he discovered Atlas Studios.

“The beauty of what they do there just stunned me,” he says. “It’s just an incredible creative ambiance, a clean, comfortable place that inspires you to show up every day and do your best work.’

Once I saw what was going on here, I wanted my studio to be here and I wanted to get involved, to develop along with the city, to help in any way I can.”

Growing up amid the architectural design encyclopedia that is Newburgh’s historic East End, he’d always been fascinated by the “ghost signs,” the large, painted letters fading to invisibility on the city’s once-bustling commercial buildings. 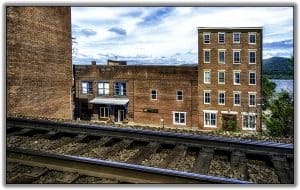 Barely visible on this waterfront assembly of buildings, is the faded hand-lettered signage from a bygone era. “Ghost signs,” Pat Nunnari calls them.

In creating the Water Street sign, he drew on that inspiration.

“Welcome”  is written in cursive with “City of Newburgh” displayed in traditional, heavy block lettering four feet high, evoking the feel of an old-school typeface but with a modern drop-shadow flair.

Nunnari has put down roots here both professionally and personally. He’s a father of three, married to fellow Newburgh native Stephanie Pagentine Nunnari, whose Society of Lash, with locations in Beacon and on the Newburgh waterfront, is the Hudson Valley’s first-ever eyelash salon and won a best-of award in 2018. The couple have a preschooler and infant twins. 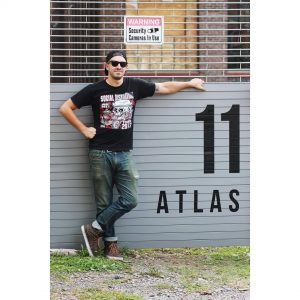 “The past five years have been absolutely fantastic, and I give a lot of credit to this city and Atlas as an inspiring environment,” says Nunnari. “I’ve got clients from coast to coast, so I bounce back and forth a lot, doing graphic design and animation.

I’m moving into Color Cube, a screen printing warehouse on South Colden Street, and I’m building out the business end of things with the sign painting so I want to add screen printing capability.” 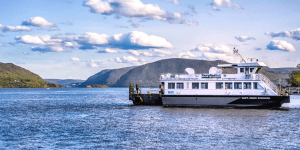 His hope is to aid Newburgh in crafting a refreshed visual appeal worthy of her gorgeous location and stunning assets.

“I’m happy to work with any small business that would like an old-school sign, or really any assistance they might need,” he says. “I’m local and my work is attainable.

“I hope the Welcome sign lasts and lasts. I’ve lived in other places, and here is where I want to be; I want to show my grandchildren the sign I painted. And I love being involved with Naomi and the Department of Small Interventions.”