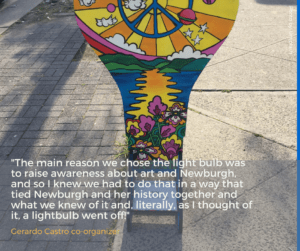 A while back we sat down to talk with Gerardo Castro and Michael Gabor partners as well as co-owners of Newburgh Art Supply, indefatigable promoters on behalf of the arts in Newburgh, and organizers of The Newburgh Lightbulb Project.

We spoke about history, art, and the Lightbulb Project, all in the context of Newburgh:  where she has been, what she’s become, and where she is headed.

These two artists and shop owners are the definition of good citizenship and first-in-class members of the creative class.
In fact, they are city treasures.
Whether it be their Lightbulb Project (which this article publicizes);  their Open Studios Event, which is an annual fall event that raises awareness about the burgeoning art scene in Newburgh; or their spring event, Art About Water, which is part art exhibition and part community awareness about the importance of water, these gentlemen show up, get involved, and do much to raise awareness about Newburgh’s art, its history, and especially its potential. 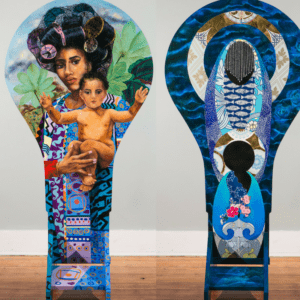 To understand their arts activism as it pertains to Newburgh, and how they arrived at it, we spoke of how some of their inspiration for arts activism can be traced tied to Michael’s (now deceased) friend, Don Herron (known for his early 80’s Bathtub Series).

Herron photographed many of the hugely successful Soho and club scene artists who soared to international fame. Artists like Keith Haring and Robert Mapplethorpe were Herron subjects.

We also spoke about their their own artistry (Michael is a photographer and Gerardo is a painter).

It’s the same old, same old of artists moving into a beaten down neighborhood with good bones, only to be displaced as the very neighborhoods they revive begin to gain fortune, chic stores, and trendy restaurants.

Micheal,  Don, and a lot of other artists made New York’s Soho, the East Village, and the Flatiron and Chelsea neighborhoods their home turf.

The areas were hugely popular with because many commercial real estate properties were converted into  loft-style apartments that were huge and accommodated studios and equipment for a true live-work environment, all at cheap rates.

Eventually these neighborhoods gained so in popularity that the residential pioneers who helped create real estate demand were forced out of their Manhattan digs as rents rose beyond what was financially sustainable.

As these New York neighborhoods were in the process of changing, Michael like Don Herron did what any self-respecting, peripatetic artists would do: find another (forgotten) city, with great old bones and a fabulous history, buy a home there and begin the process of making a home, again.

In their case all three chose to move to Newburgh.

Michael’s project became the Fullerton Mansion, which he invested a great deal of time, effort and money into restoring. And, Gerardo Castro, explains, Don Herron’s project became the purchase of the town home  that was located on First Street around the corner from the Montgomery Street Electric Station, one of the country’s first power stations. In Herron’s own words, “This house on First Street represented everything that was important to me in a house: age (1836), quality of design (designed by Thornton Niven) and history (built for the Clinton family, and wired by Thomas Edison himself in 1883 while he was a guest in the house.)”

Historical footnote: Thomas Alva Edison resided at the town house, living there while supervising the construction of the Montgomery Street Electric Station, which was one of the United States earliest service stations, producing electricity in 1884.

Their appreciation of the confluence of history, technology, and how that was dramatically realized in Newburgh, which for almost two centuries was one of the United States’ premier economic powerhouses, informed their decision to create “The Lightbulb Project.”

We began to understand the inter-relatedness and significance of The Lightbulb Project,  Newburgh, art, and Newburgh’s history.”The main reason we chose the light bulb was to raise awareness about art and Newburgh, and so I knew we had to do that in a way that tied Newburgh and her history together and what we knew of it and, literally, as I thought of it, a lightbulb went off!” Gerardo Castro
Artists are invited to reimagine oversized lightbulbs to reflect current events, artist insights, and artistic imaginings in the style particular to the artist. As years have gone by, what once drew dozens of artists now draws hundreds of artists.
The Lightbulb Project is considered by Michael and Gerardo to be a Public Art Event. It features 100’s of four-foot lightbulbs that are sponsored and then exhibited throughout the City of Newburgh (typically at the sponsor’s business -serving a second purpose of bringing awareness to Newburgh businesses).
The Lightbulb Project usually culminates in a large-scale art event, typically a silent auction of the fabricated light bulbs open to the public held at the Newburgh waterfront.

Michael and Gerardo encourage the public to engage with each of the Light Bulbs which are on display for about a 2 months period.

Many  challenge traditional boundaries and most defy easy definition. 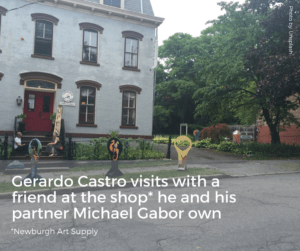 “Community events are an investment in our future. They create opportunities that can foster excitement and vitality in individual members as well as in the community as a whole.

One of my fundamental objectives with The Newburgh Lightbulb Project is to have art that is uniquely accessible and that enables people to experience art in the course of our daily lives, outside of museums or other cultural institutions.

In consequence, the work can reverberate throughout the community, thereby encouraging a sense of shared ownership and collective affiliation.  The Lightbulb Project is intended to provide an intersection between past, present and future, between disciplines, and between ideas.

By building and reinforcing community culture, public art can act as a catalyst for community generation or regeneration, and it’s freely accessible.

Experiencing the 4-foot lightbulbs does something that neither a public space without art nor even a museum with all its art can do: it can capture the eye and mind of someone passing through our public spaces. It can make us pay attention to our environment; it can encourage us to question what’s around us.”