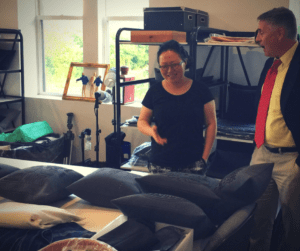 A designer with an eye for unique textiles

Newburgh, N.Y. resident and creative maker, Lan Park, is the creator and designer of a unique home goods textile line which she runs out of the huge Newburgh loft she shares with her husband, Michael Park, who also helps manage her business.

They call the company Hudson and Kings.

Lan designs primarily in textiles, and takes a very inventive and creative approach to her work.

Her designer’s eye is drawn to detail, composition, and the contrasts possible with color, value, and hue.

While some designers will use print and others electronic media, Lan chooses to express herself (primarily) through the medium of fabrics.

The material she favors and works most frequently with is an embossed bonded jersey. Using bold primary colors as well as black and white, she reveals the unique three-dimensional textile design of the fabric from which she fashions her home-goods pillows. 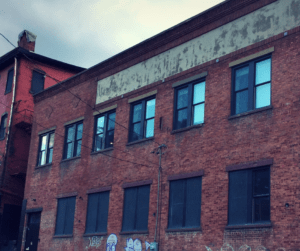 Hudson and King’s home base at Renwick and Edward’s street in Newburgh, N.Y.

“If you are walking on the city street, you’ve probably stepped on a manhole cover just as thousands of New Yorkers do daily. As a designer, everything in the city inspires me: the streets, passing cars, art, music, history, even the people.”

“I am especially inspired by manhole covers and their designs!”

“I combine these two elements with our patent-pending, signature embossing. By embossing on a soft material, like our bonded jersey, our images of Brooklyn manhole covers really stand out,” she notes.

“I worked at Samsung’s Cheil Industries, just when they were focused on the worsted wool market, and I saw a Piazza Sempione jacket using the double-faced wool with hand finished seams I knew I’d be able to replicate.”

“I saw the trend coming and pitched this textile to Ann Taylor and J. Crew who went with it, and worsted wool did become all the rage.”

“They (Cheil) spoke Korean and didn’t really have a sales rep. And, as I am Korean, but educated here, I was able to call upon these industry leaders to explain what we had to offer. I wasn’t a salesperson, I just picked up the phone!”

“I spoke the designer’s language since I had a degree from FIT (The Fashion Institute of Technology, a premier fashion design college in New York’s Garment District). And, at the time, Cheil was making a foray into the double-faced worsted wool, pushing product from its Korean mills, she said.

The timing couldn’t have been better since the menswear look was hitting all the shows, with leaders like Armani popularizing the aggressive, swagger cuts and traditional menswear fabrics like tropical weight gabardine and flannel (both a worsted wool) which women wanted.

Han Feng was famous for her pleating, and her designs were hot products marketed by famous labels such as Henri Bendel and Saks.

Hudson and Kings at a pop-up shopping location in Manhattan

“I even did illustrations for Han Feng which ended up in Vogue,” Lan notes, with a bit of surprise, as she reviews the twists and turns of her career.

By the late 1990’s, the Garment industry in New York was changing, a lot of production was headed oversees to Asia, and that, coupled with the birth in 1996 of the Park’s son (Christian) made Lan decide to become a consultant.

Business was good and by offering to consult, she had the best of both worlds.

At this point, the business began keeping her very busy and, as she wanted to work from home, Lan decided she would invest in real estate.

She opted for Brooklyn, and decided to build something that would serve as a live/work space for her business and family.

“I kept getting outbid in Manhattan. A property would come on the market and would be gone by the time I got there. I finally found a property in Brooklyn and I bought it. It took more than ten years just to get financing to build.” she said.

Lan built a condominium complex, but at the moment she was ready to sell the condos, the major markets had their infamous meltdown; 2008 was no time to sell.

Heading to the Hudson Valley

As it turned out she managed to hang onto her complex by dint of sheer will and a little bit of luck, and she now rents out the condos in Brooklyn which has since seen rental prices skyrocket.

Meanwhile, during the early 2000’s, while all of her business interests were in motion, and fresh on the heels of having a baby, September 11th happened.

Lan wanted out of the city and headed north.

She liked Newburgh, but she thought it was too early to buy there. So, she and Michael and Christian lived just a little north of Newburgh in the hamlet of Wallkill,  and she commuted back and forth to the city for five years (she had a showroom and office in the Garment District in Manhattan).

Eventually she moved back to Brooklyn in the mid 2000’s as her condo complex was nearing completion.

But the allure of Newburgh was always in the back of her mind, especially because she knew of its history as a textile center, and loved its location on the Hudson.

And she knew if she wanted a textile business a building in Newburgh might suit her purpose, and that, also, there might even be a workforce of trained textile workers still in the area. 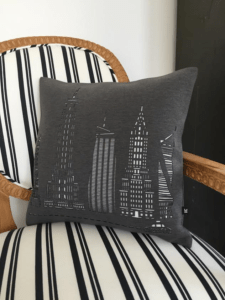 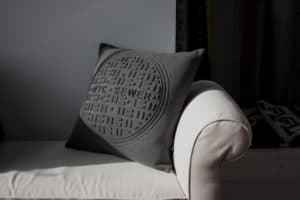 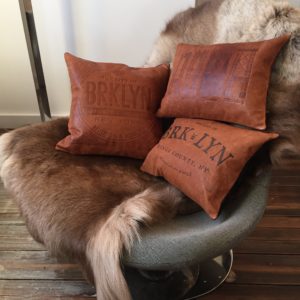 Buying a space in Newburgh

“I had visited when we moved up here different places and actually found a coat factory that was still making coats, so I thought some of those workers might still be here.”

In August of 2015, Lan and her husband,  Michael, bought a three-story building on Edwards and Renwick Street

” I needed space where I could live and also have warehousing, ” she explains.

The building is amazing, with a wonderful view of the Hudson and gives Lan all the space to create that she could possibly need, as well as a properly vented basement where she can store things.

In fact, her unique home goods textile line is named for Brooklyn, where she still has her condominium complex, since it is in Kings County (hence the “king” in Hudson and Kings) and it’s named for the Hudson River, which she has a view of from her marvelously renovated three-storey building.

Lan designs her products in Newburgh, and some assembly is done here as well, although the fabric is made in the far east.

It is her hope that a workforce of trained sewers can be developed that she can access in order to get more piece work done to meet demand.

At the current time, however, workers who would fit the bill are few and far between and the only vendors she has encountered thus far have been too pricey.

Lan believes the re-shoring of production to Newburgh would have to find a workaround to this issue of trained, affordable labor

Newburgh still a place of opportunity for commercial real estate

In the meantime, Lan is busily filling orders for Bloomingdales as well as selling her products at popups around New York City and Brooklyn.

Ever the entrepreneur, she thinks commercial and mixed-use properties in Newburgh (especially those in the East End Historic District) are still a steal and has nothing but an optimistic point of view regarding the growth of the city.

“It was the same thing in Brooklyn. Old timers never thought any thing would change, but the new people who came in totally saw the potential. And they knew it would change, and they helped make the change. The same thing will happen here in Newburgh, the newcomers will bring the necessary change.” she said, confidently.