Outside of the City of Newburgh, Sisha Ortúzar is widely known as the restaurateur whose ‘Wichcraft concept helped kickstart his original vision.

A meeting at Gramercy Tavern forges a partnership.

After a meeting at  Gramercy Tavern in New York City with Tom Colicchio, the American celebrity chef who with Danny Meyer co-founded the legendary dining spot, a partnership developed, and a match was made in comfort-food heaven.

His menus showcased goods from an ever-expanding number of NYC Greenmarkets whose emphasis on regional agriculture has been instrumental in helping promote small family farms so their locally grown products could be sold directly to consumers.

(On a historical side note, the NYC Greenmarkets concept was created by the urban hero and former Newburgh city planner Barry Benepe.  In 1968 Benepe was hired as Newburgh’s first city planner.

Shortly thereafter, he learned the Newburgh Urban Renewal Agency was tearing down landmark buildings and huge chunks of the early-19th-century streets that had initially attracted him to the Newburgh.

With the help of historic preservationist and author, Arthur Channing Downs, who meticulously chronicled many of the historic buildings in Newburgh, Benepe spearheaded the creation of the East End Historic District, thereby protecting many landmarks). 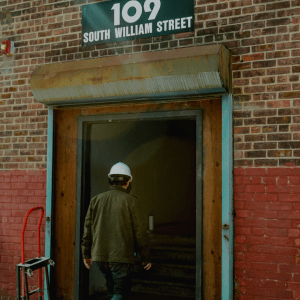 In 2011,  Sisha added urban farming to his resume with the opening of Riverpark Farm.

And when he and his wife relocated to New York State’s other city, about four years ago now, he still thought he might open another restaurant at some point.

“I had been cooking,  building, and running restaurants for a very long time and decided that I didn’t want to do that in New York City anymore.

And I thought the Hudson Valley presented a good opportunity to do it at a smaller scale in an environment that’s not so overblown and saturated. So I started looking for something to do up here.”

Choosing a home base wasn’t a problem.

”Newburgh appealed to us because we like cities, city living, and the things that come with that. 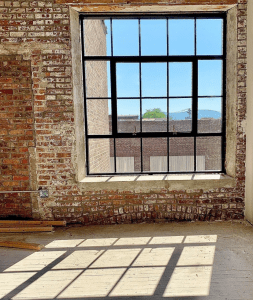 A window frames the view across to Beacon, N.Y. from Wireworks. Image courtesy Wireworks.

But it’s a human-scale city.

Ortuzar’s not one to be turned off by a challenge. Rather the reverse.

When architect Colin Brice of Mapos, a friend and former collaborator who knew that he was looking for a worthy project, approached him with the news that Newburgh had put out a request for proposals on the 1895 industrial compound at 109 South William Street, Sisha was intrigued.

A River of Opportunities’ Unofficial City of Newburgh Zoning map. Wireworks is in the East End Historic District. It is in the Downtown District, as well.

I was a little bit concerned; I really have no experience developing something of this scope. A lot of restaurants, but I’d never worked on a full building development project.

So we brought in a third partner, a builder, and developer from the Hudson Valley  who has a lot of experience.”

That third partner was R.L. Baxter Building Corporation of Poughkeepsie. Baxter is a builder with deep roots in the region and a sophisticated understanding of the beauty and history inherent in a city like Newburgh, as well as its challenges.

The three formed BOM Newburgh (the name consists of the partners’ initials) after their proposal was chosen by the city for a mixed-use development of the property. 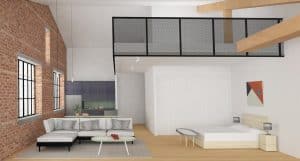 109 South Williams Street was part of a retired sea captain’s homestead before a growing Newburgh manufacturing base filled the city in, and Staples & Hanford Wireworks, manufacturers of the “Staples & Hanford Indestructible Spring Work,” built their factory there in 1895.

It’s in a prime Newburgh location, directly across the street from Atlas Industries and Atlas Studios, near Washington’s Headquarters in the heart of Newburgh’s Historic East End.

As the area has developed, boutique shops like Oliver and Chatfield and Rob’s Roast Coffee have sprung up nearby.

When completed this December 2020, the mixed-use project will feature bi-level loft apartments, live/work artists’ studios, the BEAHIVE Newburgh, developed by pioneers from Beacon, N.Y., in the coworking movement, and a commercial space ideal for retail or food and beverage.

“We’ve had a lot of different plans on what to do with space,” says Ortuzar. “The ideas have evolved over time.

We first put in a proposal to purchase this building from the city at the end of 2017, so it’s been a while.”

City worked with a spirit of collaboration.

Dealing with a municipality is always more time-intensive than a private transaction, and the BOM team understood this going in.

Ortuzar gives the city high marks for its spirit of collaboration.

“We had to do additional environmental studies, and there was a lot to go through.

We won the bid in March of 2018, and we didn’t close on the building until August of 2019. But not for lack of cooperation; everybody that we worked with at the city level was extremely supportive and helpful.

And not only because, you know, they were the seller in the transaction and wanted to make the sale happen, but also because they wanted the process and the project to succeed.

They believed in what we are doing.”

Mixed-use development was always a goal of the city’s revised rezoning efforts.

“With thoughtful zoning focused on proper density, the City of Newburgh has demonstrated a city can not only foster community it can also encourage economic development by setting policy that is favorable to mixed-use commercial real estate.

And mixed-use, says Ortuzar, helps nurture the distinct and sustainable character that makes a city worthwhile.

“One of the great things about the city is that you can live and work in the same environment, as opposed to a suburban situation where you go to work and leave the city to go home. Mixed-use is what we believe makes cities active, energetic, and interesting places to live.

What is Mixed-Use Development?

Mixed-use developments according to the MRSC, are “developments (that) contain a complementary mix of uses such as residential, retail, commercial, employment, civic and entertainment uses in close proximity – sometimes in the same building.”

As noted in our article on Mixed-Use Developments in the City of Newburgh, here, “These developments are pedestrian-friendly and encourage walkability within and between city neighborhoods.” 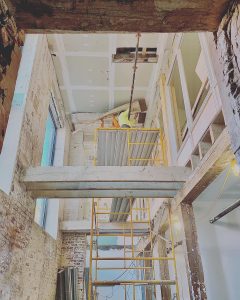 The building as a “citizen” contributing to the neighborhood.

“The idea of doing a mixed-use project was what attracted us to this building in particular.

We’re kind of crafting the building as a citizen, so what happens in the building contributes to the fabric of the neighborhood.

What’s the point of having apartments or houses or restaurants if you don’t have places for people to work? Whether it’s office space or manufacturing.

The area that we’re in is already a mixed-use area; there are warehouses, there’s retail, there are places like Atlas and a lot of residential, all in the same place, and we are happy to add to that.”

A building with terrific bones.

Once the BOM team got started on the renovation, they realized they had a tiger by the tail, albeit a tiger with terrific bones.

“The building was added to through the years; it’s two buildings put together.

There’s a lot of funky stuff, like spots that used to be windows are now bricked over and underground. There were doors that go nowhere. It’s kind of hard to make heads or tails of exactly how the thing was designed and evolved.”

“One of those added structures is a little building on the east side that, at some point in the eighties, was a luncheonette catering to the factory workers in the area.

A collapsed roof is removed making way for a “beautiful imperfection.

When we found the space, the roof had collapsed, so we took it off and really liked the way that the structure feels and looks without a roof, windows, or anything, just a ruin.

So instead of replacing the roof and taking advantage of every square foot, making it a usable space, Mapos designed it to be the entrance to the building, what welcomes you in.

There’s an access ramp as the property slopes through this structure, and we’re planting native grasses and trees in there. It has a unique character. It’s a beautiful imperfection.”

The commercial space on the ground floor, 2,500 square feet with 10-foot ceilings and three generous windows, had been originally envisioned as a restaurant, but COVID 19 changed those plans, at least for the time being.

Now the space is divided into artist or work studios.

Plans for an intimate dining space.

There are still plans for a restaurant in the building, however, but at a smaller scale, in a more intimate space with outdoor access.

“We want to be very deliberate about what goes in there; we’re trying to build this little community within a community” The restaurant will not open when the building is completed this year, it will have to wait for now but the team hopes that the time will be right for it soon.”

Three projects on the block add to area’s resurgence.

Sisha also pointed out other developments on the block adding to the areas overall resurgence:

1) Just to the west of 109 South Williams, at the corner of S William and S Lander, there are 4 buildings being renovated as one.
He points out there will be 12 new residential units, and they are doing a historical renovation, including beautiful brick and wood facades.
The developer is Hershy Weinstock, who recently did five buildings on Renwick and Johnes St. These should be ready in March.
2) At 41 Liberty, on the northwest corner of Liberty and S William, Dina and Greg Sgromo (engineers and landscape architects from Syracuse) are finishing up the renovation of a three-story building.
They are doing all the work themselves. The building, another Mixed Use development, will have a retail space on the bottom, an office for Greg’s engineering practice, and three apartments.
3) The Wireworks project.
The three projects combined are bringing a lot of new life to the block, and of course new sidewalks, trees, etc.,” Sisha noted. 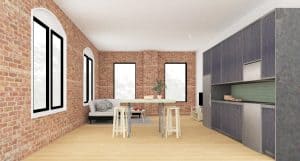 Some of the lofts have mezzanines, perfect for a second bedroom or home office. The live/work studios are designed as open spaces, to accommodate a variety of uses, and have full bathrooms and kitchens,

The building’s amenities include on-site laundry, off-street parking, an elevator, a courtyard, and a smart access system.

BEAHIVE Newburgh provides a member-powered, creative work environment for entrepreneurs, the creative class of freelancers and consultants, and micro-businesses.

More than a shared workspace, the Newburgh hive is rich community of members with a desire to improve their professional and personal lives and their community.

BEAHIVE is driven by the dream of vibrant, diverse, and inclusive Hudson Valley communities — supported by an economy that is sustainable, locally rooted and human scale.

BEAHIVE is a community, and communities thrive when they work together, play together, share ideas, and — well — commune.

There are several ways you can be part of the Newburgh Beahive community, one of them is right for you.

All members of the community have access to the shared amenities, which include conference rooms, meeting areas, phone booths, a lounge, a pantry kitchen, and great coffee.

Private desks, with plenty of personal space, in an airy and light-filled open floor layout. Available full time, or as part time memberships.

Just passing through and need a place to work? A day pass gets you access to an instant community!

Private offices within the communal working space, perfect for individuals and small teams that prefer a space of their own. Privacy with all the benefits of a coworking community.